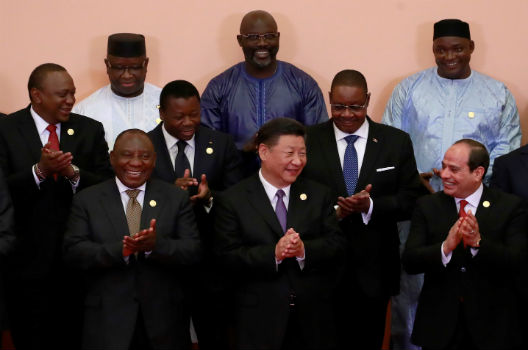 On September 3 and 4, Chinese President Xi Jinping will host the 7th Forum on China-Africa Cooperation (FOCAC) in Beijing. Happening every three years, past FOCAC’s have been used as a platform by Xi to announce new Chinese commitments to deepen economic links with the continent—in 2015, President Xi pledged $60 billion in aid and financing, and he has already recommitted the same amount again this year. Dozens of African leaders have made the trip to Beijing, with the aim of bolstering political and commercial ties with China. FOCAC, coupled with Xi’s trip to the continent in July 2018, is thrusting the question of how the United States should compete with China in African markets back in the spotlight.

Three common misconceptions in Western media and policy circles about the nature of China’s involvement in Africa interferes with US policymakers’ ability to craft and implement an effective Africa strategy. Debunking these myths will foster a more constructive understanding of Beijing’s interactions with the continent and allow the United States to focus on areas of competitive advantage.

Misconception #1 – Infrastructure Financing is the Only Game in Town

China’s presence in Africa is often discussed synonymously with the Belt and Road Initiative (BRI)—President Xi’s expansive policy framework to connect China with other regions via ports, railways, and fiber optic cables. Government financing of infrastructure undergirds the effort and Chinese construction firms are involved in dozens of billion dollar projects in African markets such as the $4 billion Addis Ababa-Djibouti Railway which began commercial operations earlier this year. Chinese financing helps close a massive infrastructure gap, estimated at $170 billion per year by the African Development Bank

While still dominating the infrastructure space, Beijing’s commercial engagement with the region has evolved significantly over the past fifteen years, deepening and broadening in scope. Foreign direct investment (FDI), especially in technology, and small and medium enterprise diffusion are critical parts of China’s 2.0 approach to the continent.

FDI, invested by companies from their balance sheets, is the best indicator of true market interest. In 2016, the United States had $57 billion of FDI stock in Africa, while China had $40 billion, according to  the United Nations Conference on Trade and Development (UNCTAD). In terms of FDI growth rates, however, China FDI increased 24 percent between 2010 and 2014 while US FDI grew by only 10 percent. Both Chinese and American large-cap firms have an extensive presence on the continent. Companies such as Huawei and Transsion are becoming as well-known as General Electric and Coca-Cola in some countries. Manufacturers of telecom infrastructure and low-cost smartphones such as ZTE and Tecno are gaining increasing market share. Tecno is gaining against established players and now boasts 25 percent of the continent’s smartphone market. Additionally, Alibaba’s Jack Ma recently launched a $10 million initiative for African entrepreneurs.

McKinsey estimates that there are over 10,000 Chinese-owned companies operating in Africa, the bulk of which are small firms. Increasing China’s commitments of state lending to SMEs operating on the continent has been a feature of past FOCACs and will likely be a major talking point again this year.

While the BRI is a linchpin in Xi’s foreign policy, the notion that all BRI activity in Africa is carefully orchestrated and coordinated by top party officials in Beijing is false. The broad thrust of greater engagement with Africa has senior leadership support, but party officials are not micromanaging state-owned enterprises and coordinating their activities abroad. There is significant competition amongst Chinese companies fighting for the same large-scale infrastructure contracts in the region.

Beijing does not keep a central information repository on foreign loans extended as part of BRI. There is no Chinese version of the “US Overseas Loans and Grants” publication, which offers Congress a comprehensive overview of aggregate US government foreign economic and military assistance. While international focus has thus far centered on BRI recipients, attention may shift soon to China’s own public finances as borrowers struggle to repay debts. The lack of coordination undercuts the idea that China is a strategic juggernaut that cannot be derailed.

Misconception #3 – African Governments are being Swindled by Beijing

A final myth is that African governments are passive in negotiating contracts with the Chinese and regularly coerced into accepting bad deals. Over the fifteen years of increased Chinese activity in the region, African governments are well aware of Chinese interests and have refined their negotiating tactics to better advance development objectives. Despite criticism that Chinese firms heavily depend on Chinese labor, for example, most infrastructure projects are completed primarily by African workers, with Chinese nationals in management or technical positions. A comprehensive 2017 McKinsey report on Sino-African economic relations reported that Africans comprised 89 percent of labor on the projects surveyed. Local content and job training are regularly included as part of contract negotiations between African countries and China Export Import Bank. While some railway and road developments involve kickbacks for African politicians, most spur real economic growth.

As better infrastructure facilitates trade and the movement of people, however, concerns over African debt levels are emerging from both US and international sources. A March 2018 Center on Global Development report highlighted Djibouti as one of eight countries in severe debt distress as a result of excessive Chinese borrowing, with public external debt as a percent of GDP increasing from 50 percent to 85 percent in two years. Beijing owns approximately half of Angola’s external debt and over 70 percent of Kenya’s bilateral debt, an increase of 10-fold since 2013.

The US policy-making community must be clear-eyed about the Chinese commercial relationship with Africa in order to focus American commercial diplomacy. Fixating on the infrastructure aspect of Chinese economic engagement causes US policy makers to miss other, more powerful opportunities for American competitive advantage in sectors such as financial services, venture capital, and the entertainment industry.  By updating and recalibrating the view of China in Africa during the 2018 FOCAC, US policy makers will be able to avoid distraction and gain ground in sectors of future growth for African countries.