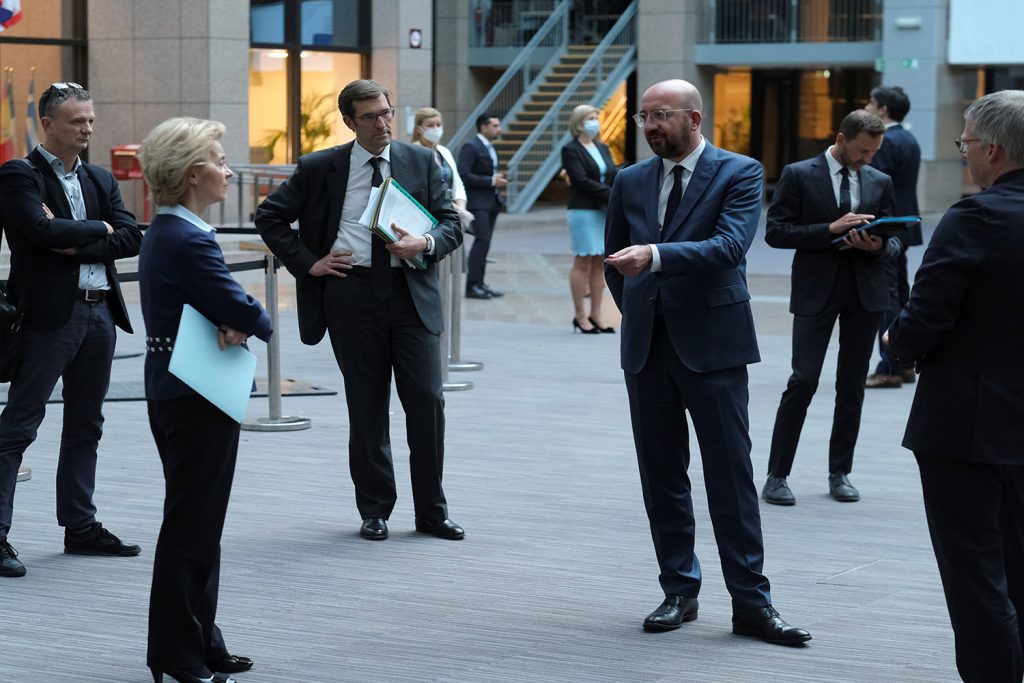 This week, talks will begin on the European Union’s (EU) seven-year budget and plans to fund the economic recovery following the coronavirus pandemic. EU Commission President Ursula von der Leyen is anticipated to start the talks on May 27 outlining an ambitious €1 trillion recovery effort paid out of the budget. These funds would add to the €540 billion of earlier initiatives, comprised of increased European Investment Bank lending, the Unemployment Fund, and loans from the European Stability Mechanism for up to 2 percent of a member state’s gross domestic product. The EU discussions will simultaneously address the budget while also providing an important marker for the direction of the monetary union that most EU members are a part of.

Several parameters of the debate that will take place over the next few weeks are now known. As talks get underway, von der Leyen’s desire for an ambitious and generous economic response is also bolstered by the desire of the European Parliament for a package of closer to €2 trillion. Importantly, France and Germany last week proposed a €500 billion European Union Recovery Fund, to be financed by debt issuance by the European Commission on behalf of the Union. In a concurrent interview in die Zeit, German finance minister Olaf Scholz actively referenced the Hamiltonian moment in US history, when the US federal government assumed state debts and commenced joint debt issuance.

An agreement within the EU to not only jointly issue debt, but to disburse the proceeds of those debt issuances in the form of grants to financially weaker member states, would be an important moment in capital markets—as things stand now, market participants can wage bets on how willing EU countries are to provide assistance, resulting in yield pressure that forces policymaking in compressed timelines. A single sizeable grant disbursement of EU bond proceeds to Italy that was disproportionately big compared to Italy’s distribution to the underlying EU budget would make such speculation a much less attractive trade and is a cheap EU insurance product against unwelcome market pressure in that sense.

Another parameter of the discussion was provided by a counterproposal from Austria, the Netherlands, Sweden, and Denmark—it repeats familiar themes of provision of loans instead of grants to member states in need, and that lending be conditional on economic reforms in the receiving country. Given the shift in the German position, the proposal is not tenable. Since Sweden and Denmark do not use the euro, the position of Austria and the Netherlands is of some interest for financial markets. It is puzzling how the Netherlands, the monetary union’s fourth largest economy, continues to settle for a predictable and therefore minor role in EU deliberations as the initial shrill and excitable representative of Germany’s interests.

The EU has good market access and high credit ratings—it has long issued joint debt to support loans to both non-EU countries (Ukraine, Jordan) and members such as Ireland and Portugal. The debt is backed by member state contributions to the EU budget and supported by the Commission’s legal right to draw on all member states in the event a borrowing country fails to repay its loan to the EU on time and that the EU’s available cash resources are insufficient to cover debt service payments (Article 14 of Council Regulation (EU, Euratom) No 609/2014). No member country has ever missed a budget payment to the EU.

The EU’s position in capital markets is a result of the fact that it only has about €50 billion of debt outstanding—the Franco-German proposal would increase that amount ten-fold. The additional contributions to the budget needed by the largest economies (Germany, Italy, Spain, Poland, France, Netherlands) to support such an increase will be an important part of the negotiations. Any final agreement will have to be approved by all twenty-seven members. But regardless of progress made in the talks, it will be some time before grants flow to the countries most in need.