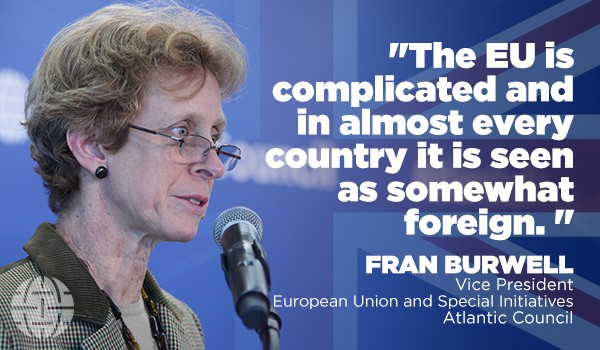 We asked our experts to tell us what the EU needs to do differently in light of the referendum. This is what they had to say:

There are two things that the EU needs to do to change. First, it needs to make its own workings more transparent to its citizens and more connected with their national politics. The union, and particularly the Juncker Commission, has tried to pick some things where they can make a real difference to people’s lives. For example, mobile roaming rates are going down this year. In discussions on the digital single market there has been a lot of talk about how it costs different amounts to ship packages when you buy something online and that you should be able to watch the movies you’ve paid for in your home country when you’re in a different European country on vacation.

But it has to be bigger than that. It has to be more about remembering why we have the EU and ensuring that there is more of a sense that citizens have a say in what the EU is deciding. In reality, they do have a say through the European parliament, which is directly elected by European publics in each member state. But few people really understand that. There is a fairly low turnout in these elections—usually only between 35 to 42 percent—although the turnout is equivalent to US congressional elections when there is not a presidential election. Because the European Parliament election is not taken that seriously, it is too easy for people use their vote as a protest, voting against their national government and sometimes for anti-establishment parties.

The second thing that needs to happen is that member states need to stop blaming Brussels for everything. They go to Brussels knowing that they have to make decisions on hard issues, but they don’t want to take the political costs themselves and so they blame Brussels, just as we in the United States often blame Washington, only perhaps a bit more so. The public needs to understand that Brussels is not some foreign place, but rather a place where their government works with others to make decisions.

In reality, the democratic deficit in the EU is not as much as it is often claimed. But in terms of perception, there is a very real sense that there is not adequate democracy in the EU. Correcting this perception and encouraging citizens to engage with the EU is one of the big challenges facing the Union in the future.

Q: Why is there that lack of perception?

Like with any political body, the citizens want certain things, but they don’t always want all the associated consequences. Sometimes the EU is too specific and rigid in terms of its regulatory policy. There are some ridiculous examples of things that the EU regulates or wants to regulate. But to be fair, sometimes national governments decide to implement regulations very strictly and then blame Brussels. Overcoming this perception of the EU is going to take a long time.

Britain is a particularly challenging case because the media there, particularly the tabloid media, has been so anti-EU for so long that the public can be forgiven for automatically seeing the negative elements of the EU.

Q: Now with Brexit, is the onus on Germany to champion reforms within the EU?

Burwell: It is going to be very difficult for Germany. It will be looked to as the strongest leader, especially since France is economically weak right now and has its own internal political struggles with its president being weak within his own political party.

It is made even more challenging by the current Polish government’s view that it is less of a player in Europe and more of a regional player. The Polish government is putting its energies more into building a regional framework rather than reaching out to Brussels as much.

A few years ago, when I would visit Germany during the Eurozone crisis and ask whether Germany could be both an economic and a foreign policy and political leader of Europe, the consensus was “not at the same time.” But Germany has been forced to pick up that role more and more as the British have been absorbed by their own domestic debate. Post-Brexit, this could become a permanent state of affairs unless we see other countries step forward.