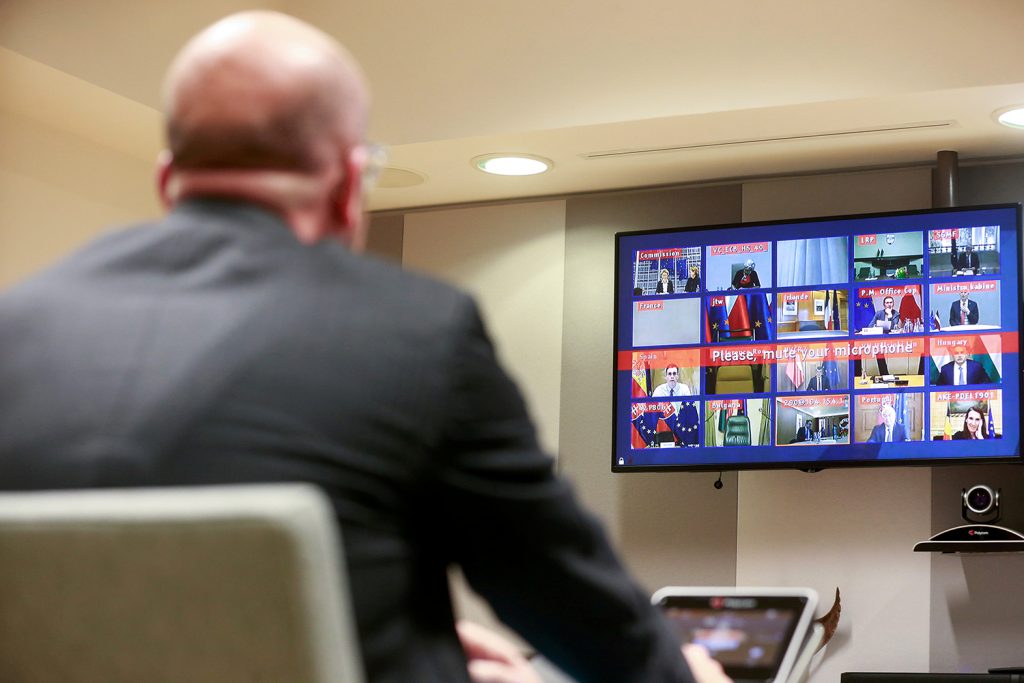 Although European leaders were finally able to agree on a massive rescue package to help the European economy weather the storm of the novel coronavirus (COVID-19) pandemic, the lack of unity on display over the protracted negotiations raises deep concerns about Europe’s ability to navigate the difficult road to recovery. “While the nuts and bolts of this are good and helpful, the battle to get here and the lack of a long-term commitment on shared debt creates enormous risk for the eurozone,” according to Josh Lipsky, director of the Atlantic Council’s Global Business and Economics Program.

Finance ministers from the Eurogroup—which represents the nineteen countries that use the Euro—agreed to a 540 billion euro package late on April 9 after days of negotiations and a previous stalemate on April 8. The stimulus includes 250 billion euros for the European Stability Mechanism (ESM) to help provide emergency funds for governments in the Euro Area, as well as funds to help companies keep workers on payrolls and money to the European Investment Bank to lend cash to businesses.

As Lipsky explains “the deal brings total EU COVID-19 fiscal stimulus to over 3 trillion euros, which is the largest in the world.” According to Benjamin Haddad, director of the Atlantic Council’s Future Europe Initiative, the deal will bring “substantial common spending with no clear conditionality on structural reform,” some of which “will have immediate visible effects such as the funding to keep employees on payroll, inspired by France’s partial unemployment scheme.” The successful passage of the new stimulus means that “everyone feels they avoided disaster,” Lipsky said, but he warned that “the deal is good news for today, troubling news for tomorrow.”

The agreement was actually less than the European Central Bank (ECB) had recommended (1.5 trillion euros) and importantly did not include “coronabonds”—government bonds that would be jointly guaranteed across the Euro currency area in order to avoid individual governments who are suffering more from the crisis (Italy, Spain) from being stuck with higher borrowing costs. The idea of jointly pooling debt was opposed by primarily northern Eurozone countries such as the Netherlands and Germany, who fear that they would bear much of the cost for these measures. But Lipsky cautioned that “it seems impossible to imagine funding a long-term European recovery without” some sort of joint debt obligation, as the crises in places like Spain and Italy are too severe for them to dig out of without access to low-cost loans.

The north-south divide among European leaders was also present over disagreements about conditionality for using the ESM funds. Under the terms of the ESM, countries in the Euro Area can draw credit up to 2 percent of their gross domestic product—but only if they meet certain conditions. Negotiations were stalemated on April 8 as southern EU countries sought to limit or remove all restrictions from ESM access, while the Netherlands, Austria, and Finland maintained that the funds must only be used for supporting a country’s healthcare system and economic costs directly related to the emergency. Leaders eventually agreed to allow any country to access the full 2 percent of GDP credit line, but only for use in the immediate crisis. There is also no explicit mention of “coronabonds,” but rather a reference to “innovative financial instruments” to help share the burden of financing. “It seems no one is quite sure what this means. It is just a way of saying we’ll figure it out later,” Lipsky explained, as northern countries have said that it means coronabonds are off the table, while other ministers say the option is still open.

Haddad called the deal “a constructive political compromise,” that European leaders will likely finalize next week, but cautioned that “this fight is not over.” He argued that “the sums will probably not be enough in the long run,” and “the question of the structural shortcomings of the eurozone is not solved.” He further questioned whether the “conditionality over the loans will come back sooner or later from either Germany or the Netherlands.”

Haddad argued that “it’s time for creativity and agility.” He suggested that “France, Spain, and Italy could create their own Eurobond,” which “if the ECB decides to purchase could be a game changer and would show that the EU framework doesn’t prevent some countries from moving forward and taking the lead, before others join.”

The inability of European leaders to get on the same page will be a critical challenge to overcome going forward, Lipsky argued. “There’s deep mistrust between north and south and nothing here heals it,” he said, adding that “the point of coronabonds or something like it is to make a political statement of unity, as much as to provide economic relief. That’s what’s missing from the deal.”

As the coronavirus pandemic and its resulting economic crisis continue to rage, European leaders will have ample opportunities to show a united front in their efforts to recover from this emergency, but they must first decide how they can resolve the continued fault lines between them.