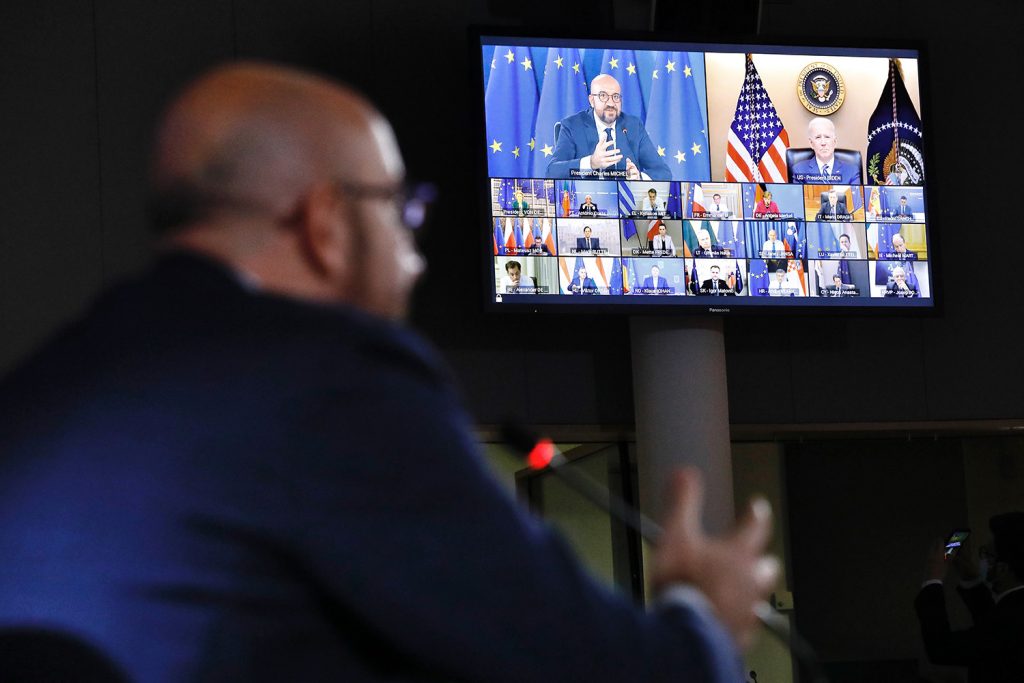 The results are in: Europeans across several countries view the United States with growing warmth following US President Joe Biden’s arrival in the White House.

The findings are part of a survey conducted by the Atlantic Council’s Europe Center and the European Union (EU) Delegation to the United States in partnership with Morning Consult, a data intelligence company. At the EU-US Future Forum, Benjamin Haddad, director of the Europe Center, and Kyle Dropp, cofounder and president of Morning Consult, presented the findings that show how Americans and Europeans—outside of Washington, DC, and Brussels—view their transatlantic allies and their partnership.

There’s “hope and optimism” about the transatlantic policies that the United States and EU can create today, said Haddad, but there are also “some concerns on some disagreements that have not disappeared with the [US presidential] election.”

Here are the key takeaways from Haddad’s and Dropp’s analysis of the survey results:

While the EU’s impression of the United States is headed upward, the United States’ impression of the European Union is holding steady since the start of 2021, with about half of Americans holding a positive view of the EU, according to Dropp. “EU favorability is on par with that of Israel and South Korea—two generally positively viewed partners of ours,” Dropp added.

Haddad said that he was particularly struck by American health care workers saying that the pandemic had “heightened the sense of the importance of the EU as a partner” and that “many lives could have been saved if the US and the EU had worked together against COVID-19.” However, Haddad noted that the reactions varied, with some Americans, especially Republicans, expressing concerns “over the lack of defense spending coming from the EU.”

Respondents in the United Kingdom, France, and Germany largely mirrored Americans’ impression of China. While Italians and Spaniards had more favorable views, they overall still held unfavorable impressions of the EU’s systemic rival. With this in mind, “a lot of Americans…see the EU as a potential strong partner when it comes to addressing some of Chinese behavior on human rights, trade policy, or security and defense issues,” Haddad said.

Americans indicated that security and defense is the most important area for US-EU partnership. Following close behind: climate and the environment. Haddad recalled that some students surveyed “compared the green transition that is being put forward by the European Commission with the Green New Deal and the agenda today in Washington,” where Biden recently convened a summit on climate for global leaders, rejoined the Paris Agreement, and has proposed a landmark infrastructure plan with a focus on green initiatives.

Other leading areas for the transatlantic partnership include human rights, trade relations, and promoting democracy. Haddad recalled a human-rights activist in Michigan praising the EU for its work in fighting against the death penalty worldwide, but also adding “some concerns on issues related to diversity and racism and saying that maybe Europe still had work to do.”

However, these priorities varied across demographics. Dropp pointed out that while adults under age thirty-five considered addressing human rights more important than other areas, far fewer older adults held the same consideration. Meanwhile, Democrats were three times as likely to say that the focus should be on climate and the environment, while Republicans were twice as likely to say that focus should direct to security and defense. Nevertheless, Haddad pointed out that “there’s clearly areas of convergence and cooperation with both political parties.”

The urgent task before the US and EU: To craft democracy that ‘delivers’

Věra Jourová, vice-president for values and transparency at the European Commission, and US Senator Chris Murphy (D-CT) joined the Atlantic Council’s EU-US Future Forum to discuss how to defend democracy.