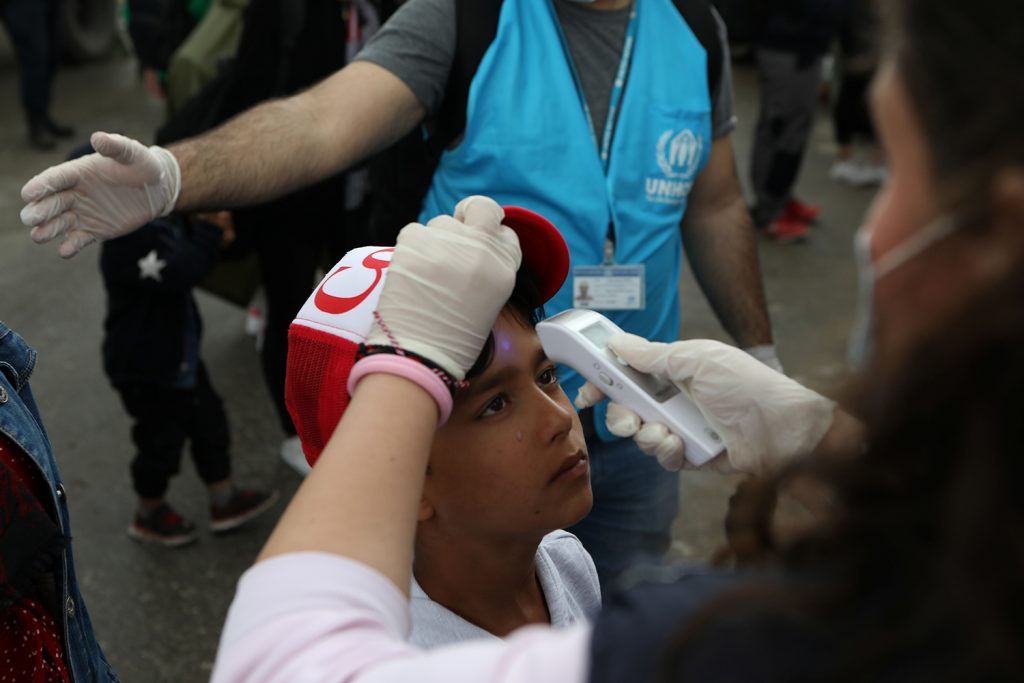 A medical worker checks the temperature of a boy as migrants from the Moria camp board busses to the port, from where they will be transferred to the mainland as a precaution against the spread of the coronavirus disease (COVID-19) outbreak, on the island of Lesbos, Greece, May 3, 2020. REUTERS/Elias Marcou

Since its emergence barely half a year ago, COVID-19 has infected more than 8.5 million people globally, and has killed at least 452,000. The pandemic—along with climate change—leaves the planet facing “perhaps its worst humanitarian crisis since World War II.”

Yet the international community is woefully unprepared to deal with either challenge, warned Mark Bartolini, founding director of the Climate and Humanitarian Crisis Initiative.

“We spend about $200 billion a year on [fighting] terrorism, and only $2-3 billion a year on pandemic response. Yet we know from SARS, MERS, AIDS, and H1N1 how devastating to economies and populations a crisis like this would be,” said Bartolini. “With climate change, you have some of the same denials that accompanied COVID-19. But there is no vaccine for climate change. The list of impacts is incredibly long—storms, droughts, desertification, and disease transmission—and it’s refugees and migrants who are going to suffer the worst.”

Bartolini was one of three panelists featured in a June 18 webinar on refugees and resilience. The event—held in advance of World Refugee Day, June 20—was hosted by the Atlantic Council’s Adrienne Arsht-Rockefeller Foundation Resilience Center, in partnership with the International Federation of Red Cross and Red Crescent Societies (IFRC).

Moderated by journalist Reena Ninan, the panel took place the same day the US Supreme Court’s voted 5-4 to prevent the Trump administration from ending DACA—a program that for the last eight years has protected nearly 650,000 immigrants brought to the United States as children from deportation.

“In the current situation, we have some serious concerns about decreased access for people to seek asylum, cross borders, and exercise their rights,” said Kelly T. Clements, deputy high commissioner of the United Nations High Commissioner for Refugees (UNHCR). “It’s understandable that countries want to protect their communities from the health perspective, but we think you can have a system in place to respect human rights at the same time you’re taking care of the health of your citizens.”

The pandemic, she warned, is only likely to make the global refugee crisis worse.

“Even in the time of COVID-19, wars haven’t stopped; more people are displaced and fleeing for their lives,” she said. “Coronavirus has been blind to borders. It has not distinguished between citizens of a country and those who are temporarily in those host communities. We need to be able to support the weakest among us in order to make us all strong.”

According to Clements, 163 countries have either fully or partially closed their borders in the wake of COVID-19, and twenty-two countries have rejected potential refugees attempting to flee the pandemic—forcing them to return to their countries of origin.

In Iraq, she said, 88 percent of internally displaced people have lost their livelihoods due to COVID-19, while 78 percent of Lebanon’s population cannot afford basic groceries. And in South Africa, 95 percent of the appeals for help received by UNHCR were from refugees who were previously self-sufficient.

“We have almost 80 million people in all corners of the earth, trying to save their families, put their kids in school and find ways to support themselves,” she said. “Refugees tend to be increasingly on the younger side; only 4 percent are over sixty, and 40 percent are under eighteen. These people have enormous potential to rebuild their lives and communities should they have the chance to go home.”

Bartolini, noting a potential global breakdown of the global supply chain, said few could have imagined a situation in which aid workers couldn’t fly to world trouble spots or would be quarantined in their homes. He also warned of donor fatigue and selfishness.

“Countries are hoarding supplies for their own population. This is understandable, but it’s having a devastating impact on the most vulnerable communities,” he said. “Amid all this, you can’t help but see what’s going on around us—people banging pots in support of healthcare workers and protesting for racial justice. It’s all about connecting with other people’s humanity.”

Yet there are a few bright spots, said Clements. In March, the World Bank approved a $14 billion package of fast-track financing to help companies and countries prevent, detect and respond to the rapid spread of COVID-19. In April, the European Commission said it would secure financial support worth €15.6 billion to help partner countries address the pandemic.

And earlier this month, the African Development Bank approved $20 million in coronavirus-related grants to the five Sahel countries: Mauritania, Mali, Niger, Burkina Faso, and Chad. UNHCR will provide operational support for the project.

Added Walter Cotte, the IFCR’s director for the Americas: “Migrants are a real treasure. We need to embrace that more, and avoid fear, stigmatization and xenophobia. We need to believe they are like us, human beings who deserve the same things we deserve.”

Illustrating that potential, Bartolini recalled a mixed-marriage family he had befriended in the late 1990s while working in Bosnia.

“So many bad things had happened to them. The husband was in a concentration camp, and the wife had been injured by a mortar shell in Sarajevo,” he said. “They had a two-month-old daughter and a four-year-old daughter. They were resettled to the US solely based on their need. They struggled, as refugees do, but they worked hard and put their daughters through college. Today, the four-year-old is a CPA at Facebook, and the two-month-old is a senior executive at Zoom—which is hosting this call today. That’s the refugee story.”

Houseless in a pandemic: How community “shows up” for their own to survive and thrive together

Houseless individuals are experiencing firsthand how the pandemic has exacerbated existing inequities and further stigmatized the houseless population.

Stories of Resilience by Andrea Snyder and Jacqueline Malaret