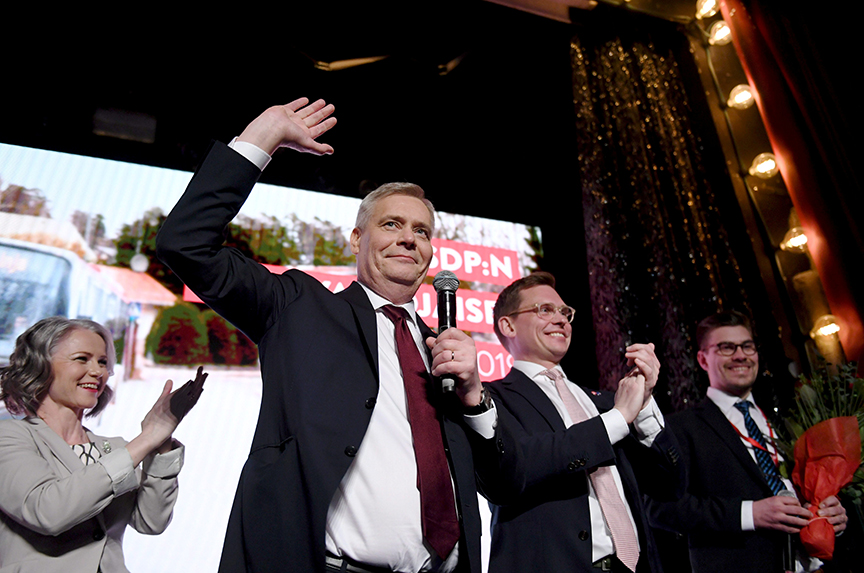 Need a respite from watching the slow self-immolation of British politics over Brexit?  Discouraged by French and German leaders asking—no longer sotto voce—if they can still count on the United States? If so, it’s instructive to look at what’s happening in Finland, a country whose 5.5 million people count slightly less than the population of Minnesota. In this country, the art of compromise is still practiced and the transatlantic relationship highly valued.

To be sure, Finland—ranked number one in the 2019 World Happiness Report—is not problem free. In Europe’s latest case of political whiplash, voters on April 14 simultaneously promoted the center-left Social Democratic Party, which won forty seats, and the far-right Finns Party, which won thirty-nine, to become the largest groups in the new 200-member Eduskunta (parliament).  Of the outgoing governing partners, the Center Party suffered major losses, but the National Coalition Party gained a seat, making it the third-largest group with thirty-eight MPs.

The Social Democrats now face the complicated task of forming a coalition government over the next few weeks. They likely will turn first to the Green League, Left Alliance, and the National Coalition, but differences over hot-button issues (such as reforming the health-care system and economic policy) will not be easily resolved. The Finns Party, however, is unlikely to be invited to join the next coalition. Their virulent anti-immigrant and Eurosceptic stances are not the only reason.  While the other parties offered various plans to combat climate change, Finns’ leader Jussi Halla-aho blamed “climate hysteria” for “wrecking” the economy.

Still, with a few notable exceptions, the overall atmosphere of the elections was respectful and scandal-free. Politics is not a blood sport in Finland. Photos on party billboards reflected the country’s younger and increasingly diverse pool of candidates. Voter participation (72 percent of eligible citizens) was high compared to the United States and many other European Union (EU) members, and female candidates did especially well:  ninety-two women will enter the new parliament (a historic record), including four of the country’s top ten vote-getters and seventeen of the twenty Green League MPs.

Foreign affairs received relatively little attention during the campaign. But as Finnish experts and officials point out, this is more a testament to the underlying national consensus on the government’s approach than a mark of indifference. Except for the Finns Party, public support for the EU runs deep and wide, even when Finland’s backing of EU sanctions on Russia takes a toll on some of its businesses. Finland assumes the rotating presidency of the Council of the EU on July 1, and any new government is expected to largely adopt its predecessor’s priorities: developing the role of the single market, combatting climate change, managing relations with China, defense, combatting disinformation, and, of course, avoiding or mitigating a Brexit disaster.

Finnish defense policy likely will see little change. Over the past decade or so, and especially since Russia’s 2014 intervention in Ukraine and stepped up military activities in the Baltic Sea region, Finland has adopted a patient and pragmatic approach. Think of it as a Rubik’s Cube that integrates several facets: Finnish national efforts, including its increased defense spending, capabilities, training, and readiness; close cooperation, as an Enhanced Opportunity Partner of NATO, in Alliance-led operations, exercises, information sharing, and political-military consultations; expanded bilateral defense ties with the United States and Sweden, recently augmented through their trilateral cooperation; active contributions to other multilateral military initiatives, such as the UK-led Joint Expeditionary Force and German-led Framework Nation Concept; and constructive participation in the EU’s Common Security and Defense Policy arrangements, including a leadership role in promoting EU-NATO cooperation on countering hybrid threats and improving military mobility.

At the same time, a coalition government led by the Social Democrats, while opposed to seeking NATO membership, is unlikely to change current Finnish policy of keeping the option open.  Moreover, Finnish President Sauli Niinistö, who was comfortably re-elected in January 2018 to a second six-year term, remains an influential (albeit circumspect) advocate of Finland’s Western partnerships.  As a leading Finnish security expert puts it: “Non-alignment has all but lost its practical relevance.”

Of course, disagreements and missteps are always possible.

For example, the next Finnish government might become a more vocal critic of the US administration’s trade policy and disparaging rhetoric aimed at the EU, as well as its decision to withdraw from the Paris climate accord. And while Finnish officials accept that Russia has violated the 1987 Intermediate-Range Nuclear Forces (INF) Treaty, they worry that the United States is widely seen as uninterested in preserving the 2010 New START accord or seriously pursuing new arms control agreements.

On the other hand, inappropriate US pressure on Finnish authorities to purchase the F-35 or F/A-18 Super Hornet combat aircraft rather than one of their European competitors—France’s Rafale, the British-made Eurofighter, or Sweden’s Gripen—could easily backfire. In January, Finland’s outgoing defense minister criticized the Social Democrats, Greens, and Left Alliance for suggesting that the government’s plan to purchase sixty-four of the new multirole fighters—at an estimated cost of $13 billion—should be revisited. The Finns Party reportedly also is interested in reducing the aircraft number.

That said, among US allies and partners in Europe, Finland—whatever the contours of the next government coalition may be—should remain one of the strongest advocates for close transatlantic economic, political, and security bonds.  History and geography (especially the 830-mile border with Russia) are good reasons for the Finns to understand the limits of self-reliance and of Europe’s willingness and ability, absent US engagement, to come to their defense.  As NATO Secretary General (and former Norwegian Prime Minister) Jens Stoltenberg recently reminded a joint meeting of the US Congress: “It is good to have friends.” That he received a standing ovation from senators and representatives should reassure Finland that most Americans still feel that way, too.

Leo Michel is a nonresident senior fellow in the Atlantic Council’s Scowcroft Center for Strategy and Security and a visiting senior fellow at the Finnish Institute of International Affairs.