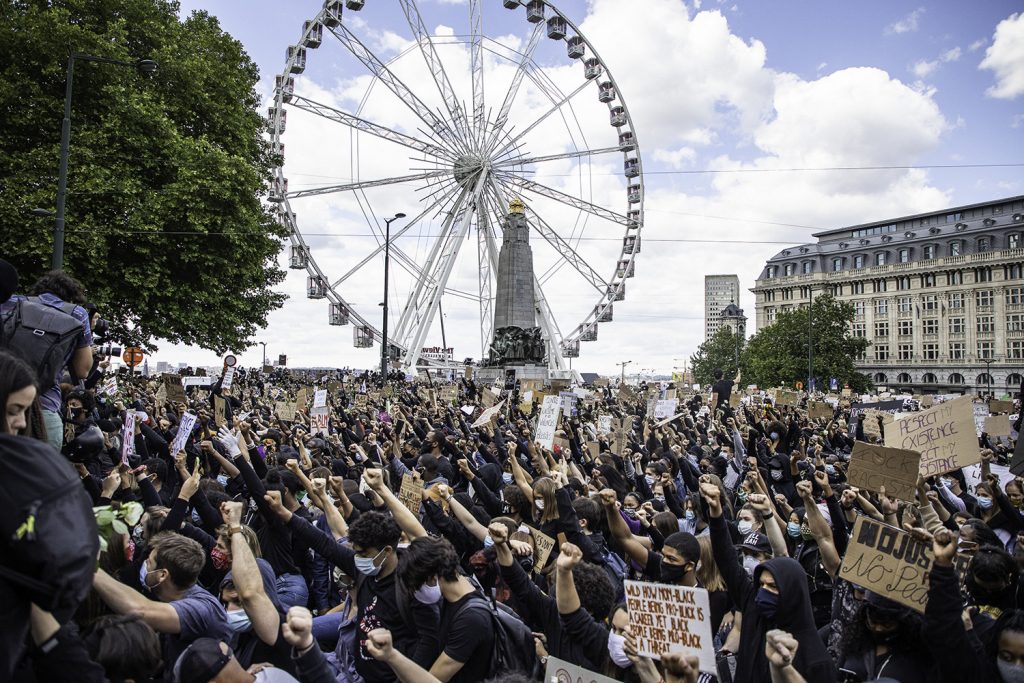 Just days before video emerged of the killing of George Floyd by Minneapolis police, footage circulated on social media showing uniformed men in Myanmar manhandling prisoners of war in an area where many were killed. Other footage showed South African security forces brutalizing citizens for failing to abide by coronavirus curfew measures, with reports of at least eight people killed. Protests also erupted in Nigeria over the killing of a businessman by police. All of the incidents received some international media attention and condemnation from human-rights campaigners.

But as news spread across the world of Floyd’s final nine minutes and the heavy-handed US police response to the ensuing public rage, something different—something extraordinary—happened.

Solidarity marches and gatherings took place from Sydney to Beirut to Istanbul to London to Berlin. Black Lives Matter, a slogan and hashtag coined some seven years ago in the United States to draw attention to police abuses against African Americans, trended globally on social-media networks and among protesters on the streets.

In Syria’s Idlib province, an artist painted a portrait of Floyd on the side of a bombed-out building, an attempt to both back the US movement and draw attention to the misery of Syrians bombarded regularly by an oppressive regime and its foreign backers. Protesters in Sao Paulo, Brazil threw rocks at police in protests that turned Floyd’s death into a rallying cry against the racially tinged, right-wing policies of Brazilian President Jair Bolsonaro. In Belgium, protesters demanded the removal of statues of Leopold II, the genocidal conqueror of what is now the Democratic Republic of Congo. A statue of British slave trader Edward Colston in Bristol found its way off its pedestal and into the nearby River Avon at the hands of protesters inspired by the dismantling of monuments to the Confederacy in the United States.

Floyd’s killing triggered something in the planetary psychosocial algorithm. What it has underscored, among many other things, is that even as American influence has declined and the mythology associated with American exceptionalism has faded, events in the United States continue—whether by way of disappointment or inspiration—to shape the course of events around the world.

In recent years, of course, there have been similar cause célèbres with international reach. The 2009 killing of Neda Agha-Soltan by Iranian regime paramilitary forces, captured on video, inspired marches, petitions, and diplomatic condemnations. The 2010 self-immolation and death of Tunisian fruit vendor Mohamed Bouazizi ignited a revolution and inspired mass uprisings that continue to resonate across the Middle East and North Africa. The 2015 massacre of journalists and caricaturists by jihadis at the Charlie Hebdo offices in Paris launched hundreds of opinion pieces and a march by world leaders in defense of press freedom.

But rarely if ever has one incident inspired such a broad global movement. Attention has focused not just on the United States and its abuses but also on entire systems of power, racism, and oppression, which have come under scrutiny and criticism in what amounts to a global teach-in. “It’s a privilege to learn about racism instead of experiencing it your whole life,” said a simple cardboard sign held up by a protester in Rome’s Piazza del Popolo.

Australia protests over Floyd are laced with concern about persistent oppression of the continent’s indigenous communities. French protests coincide with anger over police violence targeting brown people in the rough suburbs of France’s big cities. “Germany, you are not innocent,” protesters cried in Berlin’s Alexanderplatz, as they decried both Floyd’s killing and the racism that pervades German society.

What has made the mass protests particularly surprising is that they come in the throes of the COVID-19 outbreak, when much of the world seemed resigned to remain at home, stream television shows, and stay glued to their mobile devices rather than pour into the streets in pursuit of change.

It’s difficult to pinpoint exactly why the world has been so deeply moved by Floyd’s murder. But it seems almost as if people are reeling from a kind of secondary post-traumatic stress disorder. The Los Angeles Police Department’s beating of Rodney King, captured by an old-fashioned video camera 29 years ago, and a New York police officer’s fatal chokehold of Eric Garner in 2014 as Garner, like Floyd, cried “I can’t breathe,” both generated widespread attention and condemnation abroad, but no international movements like the one now unfolding. The only comparable phenomenon in recent years was the Me Too movement, which was set off by allegations of sexual abuse in the United States before spreading worldwide.

Struggling to overcome a once-in-a-century pandemic as well as an unprecedented global economic meltdown, people around the world are now stewing in a potent mix of fear and solidarity. There’s also the fact that even for many of those who no longer view the United States as a singular beacon of hope and democracy, America remains a global bellwether.

“We know racism is part of the American story. It’s just that people can’t believe it,” said Yoruk Isik, a geopolitical analyst in Istanbul. He drew a distinction between the reactions of those who are hostile to the United States and seeking to exploit Floyd’s death and the subsequent unrest for propaganda purposes, and those who believe in the promise of the United States and are saddened by what has happened. “There are some people who are happy this happened in America, and some people who just expect better from America,” he said.

“People understand that the US wields a lot of power around the world, and people see this happening in the US” and worry about President Donald Trump using that power abroad to promote the kinds of policies that protesters are opposing, said Rami Khouri, a professor of journalism at the American University of Beirut.

I asked Hend Amry, a leading Libyan-American social-media commentator, to put the question of why Floyd’s death has had such a great impact to her roughly 250,000 followers on Twitter. Some attributed it to the mundane fact that many people across the world have been idled from work or school because of the coronavirus crisis. “People who otherwise would shake their heads and then go on with life as normal can’t right now,” said one follower.

But another noted Floyd’s anguished cries for his “mama” during the last moments of his life, suggesting that they inspired an urge to act that transcended boundaries of class, ethnicity, and nation.

“It’s the yell for help to a mom that isn’t there,” the follower said. “Moms across the world heard it, and wanted to yank that monster off of him.”

What Donald Trump has failed to understand about America

The president’s ongoing failure of leadership at home in the wake of Floyd’s death may at first glance appear to have little to do with another development in recent days: his casual but telling expressed interest in inviting Russia’s despotic president, Vladimir Putin, to the Group of Seven (G-7) summit later this year. But they share an origin: Trump’s failure to understand America’s character as a nation forged in common values rather than common blood, and therefore his corresponding failure to appreciate the American worldview derived from that unusual identity.

Why the Atlantic Council’s mission begins at home: “A single garment of destiny”

Image: More than 10,000 people gathered in the vicinity of Place Polaert (Palace of Justice) during protests in Brussels, Belgium on June 7, 2020. Photo by Arnaud Brian/bePress/ABACAPRESS.COM