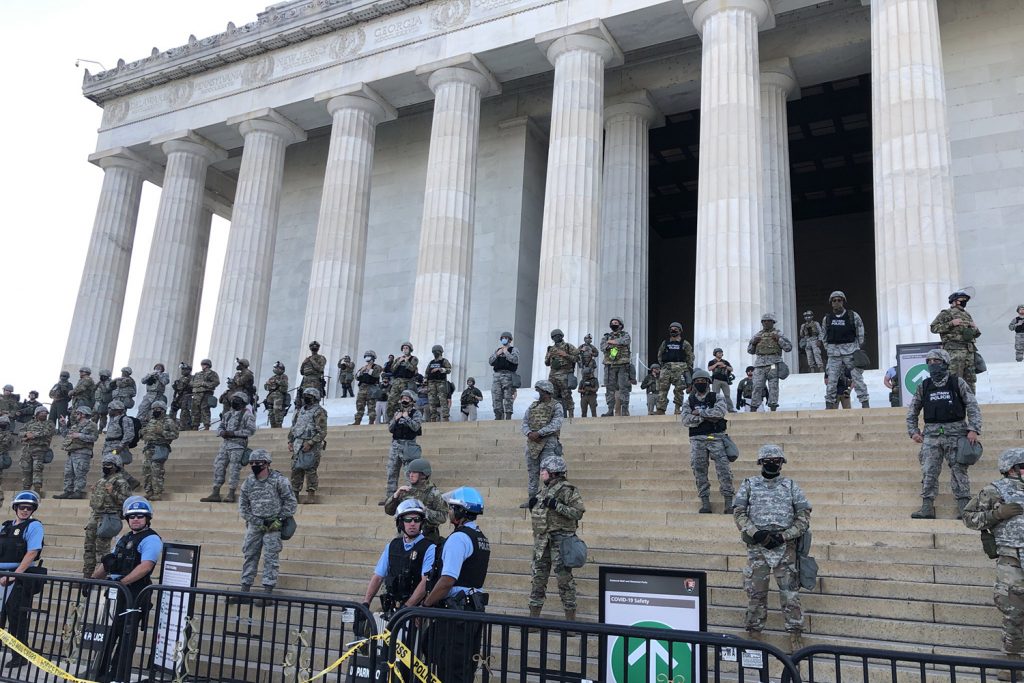 WASHINGTON, UNITED STATES- National Guard troops deployed to the Lincoln Memorial on the eighth day of protests in Washington DC, United States on June 2, 2020. (via REUTERS)

If it wasn’t the most galling image to come out of the United States over the past week, it was surely among the top contenders: troops in battle gear deployed on the steps of the Lincoln Memorial. They were there as part of US President Donald Trump’s desire to respond to protests over the killing of an African American man by a white police officer through confrontation and “domination,” in the US president’s words. It was particularly galling because the killing of George Floyd, and so many others, recall for many Americans the original sin of the United States: slavery, enforced by violence through the power of the state when that state was a white man’s republic.

The man whose statue those troops were seemingly protecting, Abraham Lincoln, didn’t simply restore the Union as it had been. He sought to remake it according to the Declaration of Independence as a nation “dedicated to the proposition that all men are created equal.” The American nation was created and has been continually recreated through adherence to that principle. Immigrants, Lincoln argued in an 1858 speech, become “the blood of the blood and the flesh of the flesh of the men who wrote that Declaration” when they embrace it. Lincoln’s last speech called for voting rights for African Americans (a stance that convinced John Wilkes Booth to assassinate him). Thanks to Lincoln, the United States was reborn after the Civil War as a new nation for all who lived there. Reconstruction tried to realize this vision. Southern white resistance and lack of northern resolve killed it, but America again and again returned to it. This remains our guide as we try to bend the long arc of our history toward justice.

The president’s ongoing failure of leadership at home in the wake of Floyd’s death may at first glance appear to have little to do with another development in recent days: his casual but telling expressed interest in inviting Russia’s despotic president, Vladimir Putin, to the Group of Seven (G-7) summit later this year. But they share an origin: Trump’s failure to understand America’s character as a nation forged in common values rather than common blood, and therefore his corresponding failure to appreciate the American worldview derived from that unusual identity.

Trump’s racially charged rhetoric—his “birther” campaign against President Barack Obama, his dismissal of an American judge as a “Mexican,” his flirtation with white supremacists, his repeated swipes against non-white public figures and journalists—are revealing. I’m old enough to recall the language of resentful bigots railing against the civil-rights movement in the 1960s. Trump’s rhetoric brings back the language of those who think that a values-based nation is a fantasy; that America is still at core a white man’s republic; and that challenges to it must be put down with force and domination.

That mindset also lies at the heart of Trump’s personal approach to foreign policy (though, happily, not always that of his administration). Judging by his persistent fawning over Putin, Chinese President Xi Jinping, North Korean leader Kim Jong-un, Saudi Crown Prince Mohammad Bin Salman, and others, Trump prefers power over principle and dictators over democratically elected leaders. Trump seems to despise the European Union, the institution through which Europe put aside its habit of regular wars in favor of wealth and order. He has little patience for consensus building, even when it would ultimately work to US advantage. (Why weaken the World Trade Organization by destroying its appellate procedure, when we could use the WTO to manage Chinese abuse of the international trading system?) Trump is so ambivalent about NATO that in 2018 his own administration rushed through conclusion of a NATO summit communique before Trump’s arrival to avoid him trashing it, as he had a G-7 communique earlier that year.

The G-7 is a core group for the world’s biggest democratic, free-market nations. Expanding it to include other democracies—Australia and South Korea for example—seems right (and many are talking about a democracy-based “D-10” in its stead). The Group of Twenty (G-20), which includes the Russians, Chinese, Saudis, and other non-democratic powers, is properly inclusive. But isn’t it in US interests to give the world’s core democracies institutional expression? To invoke an avowed Trump administration objective, don’t we want a strong venue in which we can organize the like-minded around a long-term common China policy? Bill Clinton and George W. Bush brought Russia into the G-7 when its course was arguably converging with the rest of the group. That time is gone, at least for the present. Trump’s interest in inviting Putin now, when the Russian leader has not ended the aggression against Ukraine for which Russia was kicked out of the bloc in 2014, seems intended to dismantle yet another institution of the free world to curry favor with an adversarial despot.

Dealing with dictators, understanding power, and being realistic about the world and what the United States can accomplish at any given moment is essential to wise foreign policy. But US grand strategy since 1945 has been rooted in a larger vision: that America, as a values-based nation, can best advance its interests along with its values—that a rules-based world that favors democracy is apt to work out better for us than the alternative of competing empires, cynical deals with dictators, and spheres of influence. Realism is essential in terms of tactics, but it must be informed by higher objectives.

It’s no coincidence that one of the first expressions of an interests-through-values foreign policy was articulated by Secretary of State John Hay, who as a young man served as Lincoln’s secretary. Hay’s “Open Door” policy toward China—now seldom remembered—called for an end to imperial pressure on China in favor of China’s open and free engagement with the wider world. There is a line between that and America’s post-1945 leadership, which for all its flaws and failures looks awfully good compared with the competition.

There are plenty of Americans who get it, both Republicans and Democrats. President George W. Bush’s statement and Vice President Joe Biden’s speech on the protests over the killing of George Floyd are alike in their principled, thoughtful tone, rooted in a values-based definition of the nation. America’s friends abroad, appalled by what they see and hear from us now, want us to recover ourselves. When we are back we will be welcomed, because our leadership is needed.

Why the Atlantic Council’s mission begins at home: “A single garment of destiny”

Leading through the mud

The sacrifices required to defeat the coronavirus do not require mass death. Loose talk of allowing coronavirus to kill people—young as well as old—to advance a politically-driven schedule for an early announcement of success is morally abhorrent.