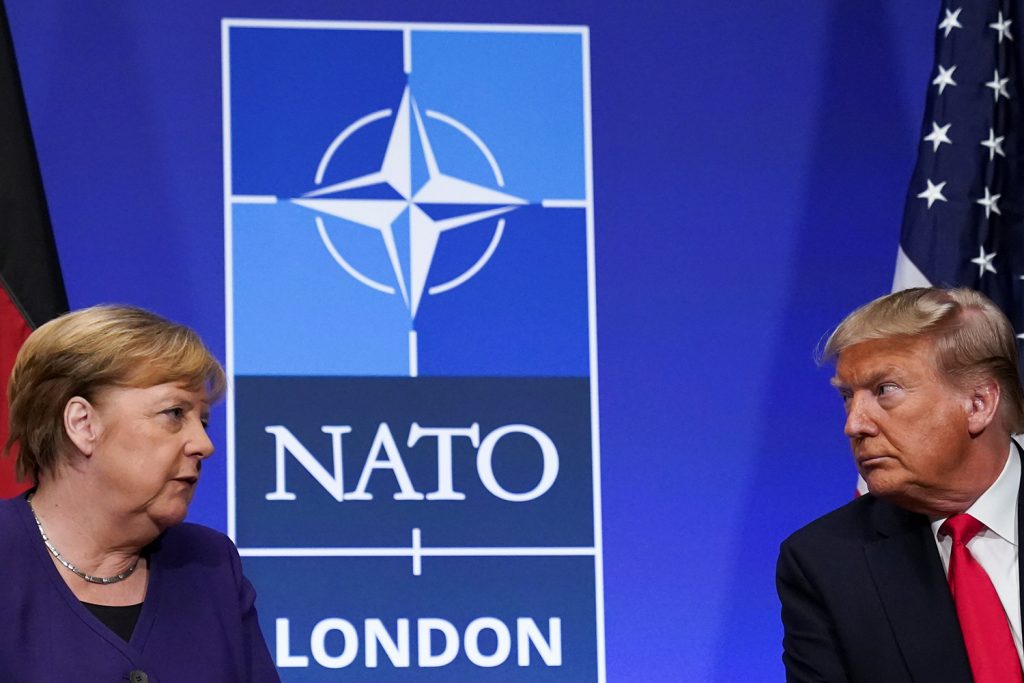 At a moment of crisis in their relationship, as Donald Trump moves to punish Berlin by withdrawing thousands of US troops from German soil, the United States and Germany are simply talking past each other. The US president and the German government have given up on one another and withdrawn to their own camps, ignoring the growing structural issues in their bilateral ties that promise to linger no matter who wins the US presidential elections this fall.

German officials have reacted to Trump’s planned troop cut by reiterating the usual, tired grand-coalition talking points of German defense policy. They have described NATO as an alliance of shared values, warned the US against signaling its flagging interest in Europe, and questioned the efficacy of NATO’s benchmark for each member to spend at least 2 percent of GDP on defense. What they have not done is address fundamental irritants in US-German relations involving energy policy, defense spending, and trade.

Meanwhile, at a June 24 press conference with Poland’s President Andrzej Duda, President Trump shattered any illusions by making clear he is personally targeting Germany in his transatlantic security policy. While German leaders (and President Duda) have framed Trump’s imminent drawdown of US forces in Germany to 25,000 as a matter of transatlantic concern to allies across Europe, the US president linked his changes in force posture in Europe to German behavior.

Trump used his appearance before the media to hammer Germany for being “delinquent” in NATO and spending below 2 percent of its GDP on defense. Of course, NATO experts counter that Trump misunderstands how NATO works. No matter. He’s the president of NATO’s most important member, and his interpretation of how NATO works is more important than bureaucratic realities. More importantly, Trump is not wrong in principle.

For well over a decade, American politicians and government officials have bemoaned Germany’s flagging contributions to NATO. In his farewell speech to NATO in 2011, delivered on behalf of President Barack Obama’s administration, former US Defense Secretary Robert Gates warned European countries that their lack of commitment to defense spending would produce the “dim” and “dismal” situation we see today in German-American relations. A 2012 Atlantic Council report cited Germany as a “lost nation” and criticized the country’s lack of commitment to defense spending and history of restricting the rules of engagement for its troops operating in NATO missions.

In recent years, after Russia’s 2014 annexation of Crimea, Germany has finally come around to addressing the issues of its deficient defense spending and poor state of military readiness, albeit without apparent conviction. Yet it has done so too late to avoid blowback from the United States, its main benefactor and protector. A President Joe Biden might not approach Germany like a slumlord dealing with a tenant two months behind on making rent, as President Trump has, but he would still expect Germany to keep its promise to reach the target of spending 2 percent of GDP on defense. Members of Congress feel the same way.

In his press conference, Trump also took aim at Germany’s sordid Nord Stream 2 energy deal with Russia, another sore point not only in transatlantic relations but in Europe as well. As with defense spending, the Nord Stream 2 issue is not merely a quixotic Trumpian obsession. The pipeline is widely reviled in Congress and in the Democratic Party, where worries about Russia are widespread, and also in Central Europe where it is seen as an example of “Germany first” behavior. Here again, Trump makes a fair substantive point, which German officials avoid. Why should the United States subsidize German (and European) defenses against Russia when Germany willfully deepens its strategic links with Moscow at the expense of wider European energy security? Bipartisan US hostility to German strategic dependency on autocratic rivals will only worsen if Berlin allows China’s Huawei to play a major role in building out Germany’s 5G networks.

If Germany were serious about alleviating the collateral damage from the Nord Stream pipeline, it could offer political and financial support for the Three Seas Initiative to develop north-south energy flows in Europe and wean the wider region off its dependence on Russia for natural gas. This would win support in the United States, Poland, and Eastern Europe, and salve the wounds and suspicions created by Nord Stream 2. Rather than wrestle with the regional and transatlantic consequences of its actions, the German government has chosen instead to create facts on the ground by plowing ahead with Nord Stream 2 and acting as if doing so will not affect its relationships with key allies.

Ultimately, Berlin is trying to have it both ways. German officials make the case for transatlantic links and better relations with Washington, without seriously addressing the fact that a number of their policy choices are undercutting transatlantic solidarity. Germany demands to go its own way on energy policy, defense spending, and relations with China, without the audacity, vision, or resources that France invests in its conception of strategic autonomy. As a result, Germany finds itself in the unenviable spot of depending on the United States for its defense, Russia for a mounting share of its natural-gas imports, and China for a growing share of its industrial exports. That triad will prove increasingly unstable for Berlin in the coming years, regardless of whether or not President Trump spends another four years in the White House.

If German leaders have indeed given up on Trump, it is hard to blame them. Trump’s offensives against multilateralism attack the foundations and principles of the Federal Republic of Germany’s foreign policy and place in the world. Yet Berlin makes a grave mistake when it allows Trump’s hostile rhetoric and actions to distract from the fact that he has identified serious, long-term problems in US-German relations. Just because Germany viscerally dislikes the American messenger does not mean it should discount the message.

Jeffrey Lightfoot is a nonresident senior fellow with the Transatlantic Security Initiative in the Atlantic Council’s Scowcroft Center for Strategy and Security.