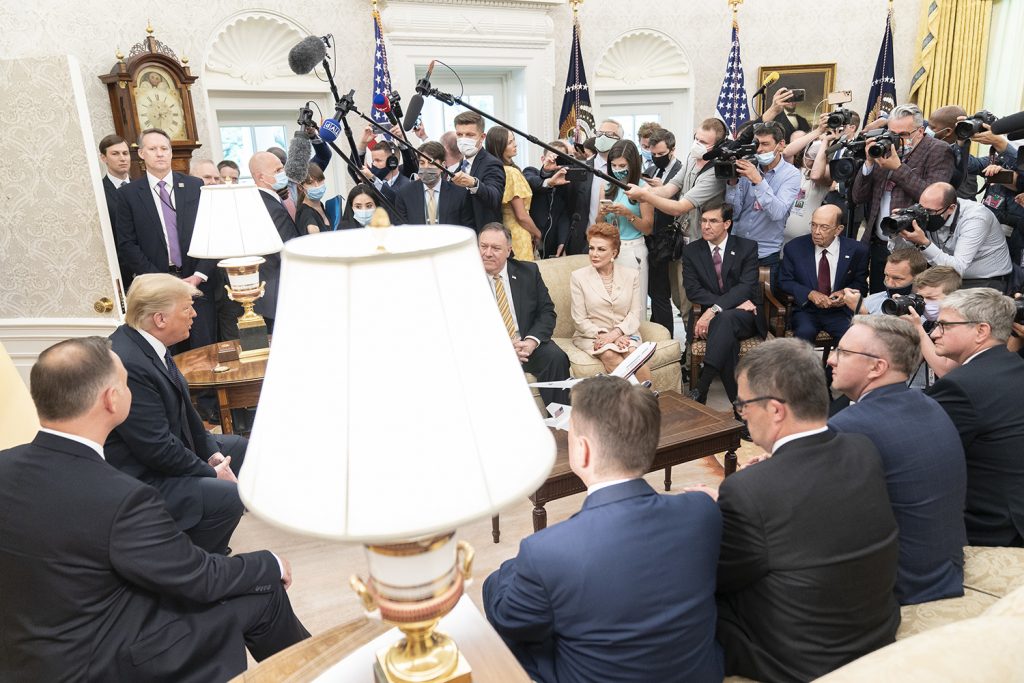 On June 15, US President Donald J. Trump confirmed press reports that he is planning to pull 9,500 US troops out of Germany, leaving 25,000 in the country. He described the decision as an outgrowth of his longstanding argument that the United States is shouldering too much of the economic burden for its alliances around the world, and that Germany and other NATO members are not contributing their fair share to the Alliance.

The plan has drawn criticism in Washington from a number of lawmakers in both parties. Twenty-two Republicans on the House Armed Services Committee, for example, noted in a letter that “signs of a weakened US commitment to NATO will encourage further Russian aggression and opportunism.”

On the other side of the Atlantic, at an Atlantic Council Front Page event on June 24, German Defense Minister Annegret Kramp-Karrenbauer warned that if US forces were to be redeployed to the United States, “you have to make sure you don’t send the signal [to Russia], which would be incorrect, that the United States is less interested in Europe.” If the president shifts US troops to the Indo-Pacific region, as US National Security Advisor Robert O’Brien recently suggested in The Wall Street Journal, “that would mean a new strategic focus” for the US, Kramp-Karrenbauer added. Meeting with Polish President Andrzej Duda on the same day as Kramp-Karrenbauer’s appearance, Trump signaled that he would likely send at least some of the troops currently stationed in Germany to Poland.

So what’s the best way for the administration to proceed, and what’s at stake strategically for the United States and its allies in how this all plays out? Here’s how the Atlantic Council’s experts are assessing the decision and its significance.

This is no way to preserve the Trump administration’s positive legacy on transatlantic security.

“We can’t sugarcoat how difficult Trump’s presidency has been for transatlantic relations. Faith in US leadership is at its nadir, and that won’t change for most Europeans as long as Trump remains in office.

“Nevertheless, the administration can claim a defensible policy legacy with respect to transatlantic security. NATO readiness and deterrence are improved, European defense spending is at its highest point this century, China is prominent on the transatlantic agenda, and there is renewed attention to arms control on both sides of the Atlantic, even if controversially. Pulling US forces from Germany to settle scores with Berlin—clearly part of the motivation in National Security Advisor O’Brien’s otherwise unconvincing post-hoc justification for the withdrawal decision—will undermine those successes.

“Details of the US redeployment will matter, but NATO deterrence of Russia is likely to be weakened if there is a net reduction of US forces on the continent, which Poland’s President Duda made clear in his public remarks on Wednesday at the White House. Moreover, there will be less incentive for Germany and other NATO members to follow US cues on China or arms control. Since defense spending will be forced downward because of the global depression, there will be few positive achievements from the past four years left to point to.

“Those in the administration who care about leaving some kind of constructive legacy on transatlantic security would do well to convince the president to change his mind.”

– Christopher Skaluba, director of the Transatlantic Security Initiative in the Atlantic Council’s Scowcroft Center for Strategy and Security

“At his press conference with President Duda, President Trump defended his decision to reduce US troops in Germany from over 35,000 to 25,000, citing Germany’s “delinquency” in meeting NATO’s 2 percent-of-GDP target for defense spending. Trump said that some of the troops would be returned to the United States and some would be shifted to Poland or other NATO countries. Such a shift would only partially mitigate the damage that would result from the implementation of Trump’s unilateral decision, and it could create other problems.

“It’s important to remember that US troops in Germany are not there primarily for the defense of German territory, which is no longer on the front line as it was during the Cold War. But US forces in Germany are vital to deterring Russian aggression along NATO’s eastern flank. The credibility of NATO’s deterrent depends critically on its capacity to rapidly reinforce any ally that could be threatened by aggression with little warning, including the most vulnerable Baltic states. Cutting the number of troops in Germany too sharply, or moving some of them to the United States, could make it harder for NATO to reinforce quickly enough to prevent Russia from presenting the Alliance with a fait accompli. Such a weakening of deterrence could embolden Russia to test NATO’s resolve.

“Moving some of the US troops to Poland would preserve some of the reinforcement capability now based in Germany, but risks over-concentrating US forces close to NATO’s eastern front, reducing their survivability against a Russian preemptive attack. It could also create political strains within the Alliance by suggesting that the United States is more committed to Poland’s security than to Germany’s. In addition, as the German defense minister noted during her Atlantic Council event, it could provoke a divisive debate inside NATO on its commitments under the 1997 NATO-Russia Founding Act. In that agreement, with NATO’s prospective enlargement in mind, the Allies pledged to not carry out “additional permanent stationing of substantial combat forces.” Upholding that pledge signals the purely defensive character of NATO’s “Enhanced Forward Presence” on the territory of Poland and the Baltic states and remains key to maintaining Allied unity.

“Trump is justified in complaining about Germany’s poor performance in meeting NATO’s 2-percent goal, but he should now shift from punishing a close ally to finding pragmatic solutions. In this regard, the German defense minister suggested that Berlin could lead efforts to create a stronger European pillar within NATO. The United States should take the Germans up on this proposal, suspend implementation of the president’s withdrawal decision, and see whether Allies can agree on increases in European military capabilities that would bolster deterrence and reduce the current over-dependence on US forces. The goal should be a future NATO 2030 that is far more balanced than NATO 2020, allowing the United States to divert forces and assets to the Asia-Pacific and other theaters without jeopardizing European security.

“In any case, Trump should listen to Duda’s appeal that the overall level of US forces in Europe be maintained, even if some forces in Germany are reduced, to avoid any weakening of NATO’s deterrent. Having made his point on German “delinquency,” Trump should now do what’s best for the security of all the Allies.”

– Alexander Vershbow, distinguished fellow at the Atlantic Council and former deputy secretary general of NATO and US ambassador to Russia

Trump’s troop withdrawal is an attitude in search of a rationale.

“This has not been a good week for transatlantic ties.

“President Trump’s announcement of US troop withdrawals from Germany—which he confirmed during his press conference with President Duda—reflects an attitude looking for a rationale.

“Trump made clear during the Duda press conference that the troop reduction is a sort of punishment for Germany for, among other things, not yet spending 2 percent of GDP on defense (a goal that Germany isn’t supposed to reach until 2024 anyway). Nobody in the administration, including National Security Adviser O’Brien in his Wall Street Journal op-ed on this issue, has explained how drawing down US forces in Germany will advance US or Allied security. Trump said that some of those troops will go to Poland but offered no further details, perhaps because those details haven’t yet been worked out. Duda, for his part, notably (and wisely) expressed support for US troops remaining in Europe for the sake not only of Polish but also of European national security.

“Meetings between US and Polish presidents usually advance European security and solidarity. Bringing US forces to Poland was a good idea when Barack Obama did it after the 2014 Russian attack on Ukraine. Trump advanced that sound policy. But the confusion surrounding the president’s latest decision does nothing to suggest US seriousness of purpose in the defense of Europe.

“The timing of Trump’s invitation to Duda is equally hard to understand. Trump likes Poland (and probably exaggerates the nationalist profile of the current Polish government). That’s good. But in extending the invitation just days before Poland’s presidential election, in which Duda faces a strong competitor from the opposition liberal party, the US thrust itself into Polish partisan politics. That’s a bad idea, which is why US administrations usually avoid such visits before foreign elections. And it also makes Poland a partisan factor in US politics, which is even worse. If Democrats start to believe that Poland is a Trump “pet,” that will damage the bipartisan support for Poland that dates back decades.

– Daniel Fried, Weiser Family distinguished fellow at the Atlantic Council and former US ambassador to Poland

Image: President Donald J. Trump participates in a bilateral meeting with Polish President Andrzej Duda Wednesday, June 24, 2020, in the Oval Office of the White House. President Trump said Wednesday that the United States plans to move some troops from Germany to Poland, speaking as he hosted Polish leader Andrzej Duda just for days ahead of Poland´s election, via REUTERS