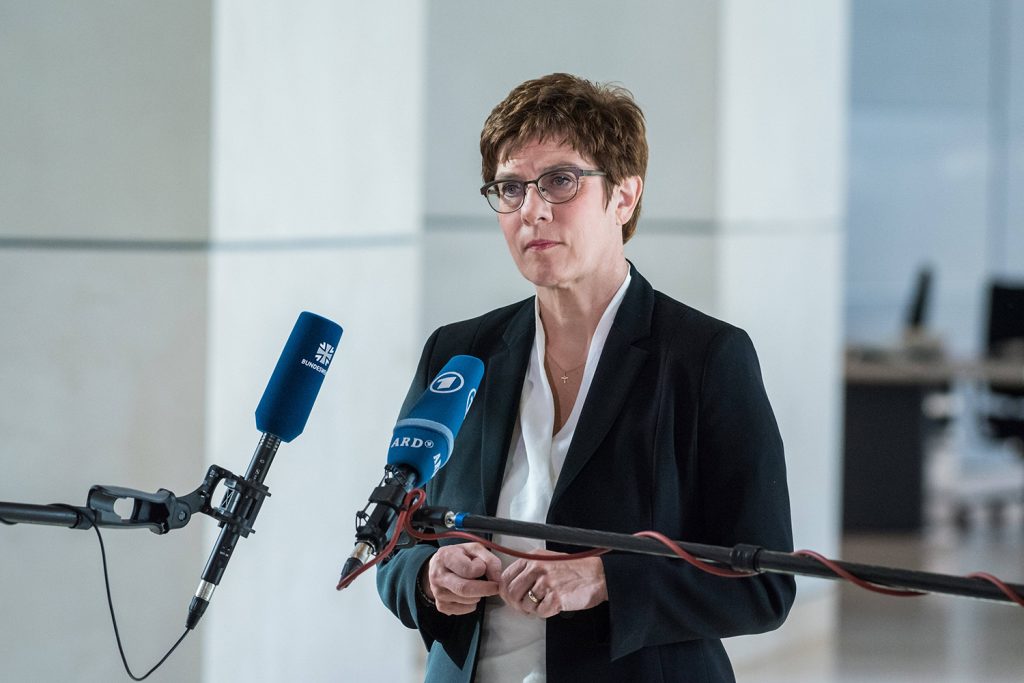 Speaking through an interpreter from Berlin at a June 24 virtual event organized by the Atlantic Council, Kramp-Karrenbauer said the 34,500 US troops currently stationed in Germany, along with the thousands of American civilians supporting those men and women in uniform, “stand up for the security of Germany, together with our own troops and NATO partners.”

But she added that they provide “collective defense” as well by sending “a very strong signal from Europe to Russia,” and also “serve US security.” The defense minister noted the importance of several key US military installations on German soil such as Ramstein Air Base, which includes a military hospital and serves as the hub for the deployment of US troops as far afield as Africa and Afghanistan.

“NATO, for us in Germany and for myself, is an alliance of the US with European and other states that have common interests but, more importantly, that share values,” she said. “NATO is not a trade organization, and security is not a commodity. But it’s about how we all together deal with the threats of our time.”

Asked about speculation that US troops currently in Germany might be shifted to Poland, she said, “We are not talking about a bilateral German-American matter, but redeployment of troops within an alliance. If troops are redeployed to the US, you have to make sure you don’t send the signal, which would be incorrect, that the United States is less interested in Europe. If troops are moved to the Indo-Pacific area, that would mean a new strategic focus.” And if those troops are moved to Poland, she said, NATO members—with the 1997 NATO-Russia Founding Act, designed to guide relations between the alliance and Moscow, in mind—must “stand visibly united and… stick to this treaty that we’ve agreed to.”

Kramp-Karrenbauer said she was reassured by recent comments by US Defense Secretary Mark Esper during a recent virtual meeting with his NATO counterparts that Washington would remain focused on strengthening the transatlantic bond and that the subject was not up for debate.

Noting how US and German forces have worked together in Afghanistan, she said, “it is important that we can rely on one another here, that we coordinate our plans with one another. And so it’s not only about an individual decision that is going to be made, but instead, it’s about how we deal with each other, how we behave to one another, what our goals are, how many allies are to be involved. And it’s important that the Pentagon and the American side is reliable.”

Kramp-Karrenbauer also said that the goal for NATO members to spend at least 2 percent of gross domestic product on defense, which the Trump administration has been urging the bloc’s European members to meet, might not be the right objective to set.

“If [Germany] were to hit another recession, we’d get to 2 percent much more quickly,” she said. “What Germany pledged in Wales was investing so much in the next two years that by 2030 we can provide 10 percent of military capabilities in NATO. That’s the goal we pursue. … That’s what I’m advocating for.”

Yet given severe budgetary constraints in the age of COVID-19, it won’t be easy, she said. “If you look at Europe as a whole, overall we have to spend as much on the military as China does, but with less effective input because very often we do things for ourselves and then realize that parallel structures in our neighboring countries are doing the same.”

“We see an aggressive, assertive policy coming from the Russian leadership,” she said, referring to Moscow’s 2014 illegal annexation of Crimea. “Russia has no respect for the right of self-determination of other countries. It was the first time since the Second World War that borders have been changed with force.”

“All this time, there have been attempts to restart and reset relations with Russia,” she said. “Russia needs to understand very clearly that we in Europe and in NATO are strong—that we follow through with what we do, and that we are willing to tackle the threat that Russia poses. This is why the concept of deterrence is so up-to-date.”

Even so, she added, “we still need and want Russia to come back to the negotiating table so we can have valid disarmament treaties again.”

Kramp-Karrenbauer noted that the United States made the right choice in withdrawing last year from the Cold War-era Intermediate-Range Nuclear Forces (INF) Treaty, which limited the development of ground-based missiles with a range of 500 to 5,500 kilometers.

“It was very good that the entire NATO, with no exceptions, said that Russia had violated the INF, and this is why it was right for the US to end the INF because it was an act of aggression,” she said. “We made very clear that we will not answer any provocation with a counter-provocation.”

But Krampe-Karrenbauer said NATO is going one step further, developing common strategies in response not only to Russia’s nuclear capabilities but also with regard to its conventional weapons.

China, she said, represents a “systemic challenge” for the United States and Europe in that the country is economically strong but does not respect the principles of individual liberty, democratic values, and civil rights that knit together the transatlantic alliance.

“We’ve had this idea for a long time that China cares mostly about economic influence. But if we look at the recent past, this time proves us wrong. In the Indo-Pacific [area], China is being very assertive and is gaining more and more clout. Australia is as concerned about China as the northern states [of Europe] are about Russia,” she said. Still, “the truth is also that we live in a globalized, multinational world with economic ties,” she added. “That means we must not engage in trade wars that will ruin us all.”

Wieslander, noting that women comprise only 10 percent of military forces throughout the NATO alliance, asked Krampe-Karrenbauer why female representation in defense is so low.

“Women are absolutely indispensable in all areas of society, and the military has to be open to women as well,” the defense minister said, adding that Germany began the process of integrating women into its armed forces rather late. She said this is particularly crucial for international missions in countries ravaged by civil wars and terrorism, where women are often intentionally targeted.

“Think of the horrible terrorist attack in Afghanistan, where an OB-GYN hospital was attacked and women and their babies were killed,” she said. “It is important that in peacekeeping missions we have a high share of women. [People in these countries] need to see themselves represented so they can trust security forces. In the past, we’ve seen [peacekeeping] troops themselves have committed crimes too.”

“The better mix we have of men and women, the better it will be for the mission, and the people on the ground we are there to protect,” she added.

NATO secretary general unveils his vision for the Alliance’s future

On June 8, Secretary General Jens Stoltenberg laid out his plans for a new period of reflection on the Alliance’s mission and structure over the next ten years. At a time when the COVID-19 pandemic has accentuated certain security threats to member states, including “unabated” Russian military activity, the spread of disinformation and propaganda, and the disruptive ascendance of China, NATO “must stay strong militarily, be more united politically, and take a broader approach globally,” he stated.