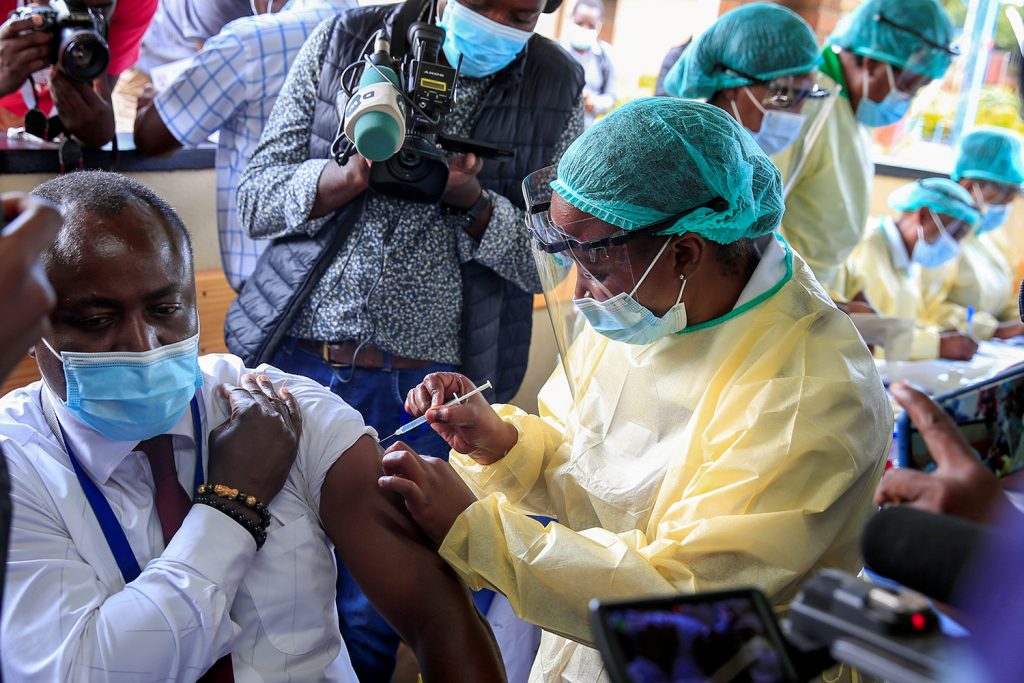 Nearly five hundred days after the first COVID-19 lockdowns, which were quickly followed by rich countries flooding the zone with vast spending programs, Africa still awaits comprehensive support from the international community to help offset the pandemic’s economic blows. When the Group of Twenty (G20) finance ministers and central bank governors meet July 9 and 10 in Venice, Italy, they have an opportunity to respond in a meaningful way. Will they take it?

Of course, some financial assistance has flowed, and the International Monetary Fund (IMF) and World Bank deserve commendation for their advocacy and support for Africa at this difficult time. Innovative policies like the IMF’s proposal for allocating $650 billion of special drawing rights (SDRs) to boost countries’ foreign-exchange reserves may help stave off the worst of the crisis for some, but the idea has moved at a sluggish pace. The overwhelming conclusion one must draw is that rich countries are leaving Africa to its own devices during an unprecedented crisis.

Grim data continues to mount from the third wave of COVID-19 spreading across the continent, driven by the Delta variant. The number of daily cases in the region recently passed 41,000, up from this year’s low of around 7,000 in mid-May; the third wave is already worse than those that came and went in July 2020 and January 2021. And there is reason for further concern for Africa, where some countries already face acute shortages of oxygen and emergency beds, as evidence from India suggests that the Delta wave is unsparing across all age groups. Africa now faces the prospect of much of its youthful, working-age population becoming afflicted by the virus.

International action in Africa is urgent, but simply reiterating that message in the face of the pandemic’s rising toll borders on futility. So while the international community has provided strong rhetorical support, actual assistance to Africa falls far short of what is needed. For example, the G20’s Debt Service Suspension Initiative (DSSI), set up in April 2020 to provide breathing room to countries facing heavy repayment obligations, allowed forty-three countries to put off paying an estimated $5.7 billion last year. However, the United Nations Children’s Fund (UNICEF) argued that amount pales by comparison with the more than one hundred billion dollars of debt forgiveness provided under the Multilateral Debt Relief Initiative and the Heavily Indebted Poor Counties Initiative, IMF-World Bank debt-relief programs put in place around the turn of the century. The latter program recently put in motion up to fifty billion dollars of relief to Sudan alone.

The international community needs to ensure that Africa receives assistance commensurate with the nearly $20 trillion in monetary and fiscal expansion that rich countries had committed, as of November, to their own economies during the pandemic. Without fresh financing, the economic divergence between advanced economies that are experiencing a return to growth and struggling low-income countries will only continue to widen.

A fresh start will require a commitment to plug financing gaps across all fronts:

The World Health Organization-led COVAX cooperative’s plan to distribute COVID-19 vaccines to developing countries and the G7’s proposal to donate one billion doses over the next year falls far short of demand. Africa and the developing world need the shots now, and India’s export restrictions on its vaccine production—originally intended for COVAX—suggest that supply shortages could persist into 2023. The World Trade Organization is considering a proposal to relax intellectual property protections on COVID-19 vaccines—which some regard as global public goods—but there is strong European opposition to that approach. Efforts to manufacture the vaccines in Africa are moving too slowly to address the immediate crisis, so another possible solution is for the Biden administration to expand the scope of the US Defense Production Act to compel pharmaceutical companies like Pfizer, Moderna, and Novavax to step up global distribution.

The IMF and World Bank should push the G7 and the G20 to endorse a comprehensive financial assistance package for Africa and then get the governments to decide how that money can best be used. This includes continuing DSSI at least into 2022, pressing lenders like China to be more transparent about their debt negotiations, and accelerating debt restructuring under the G20’s Common Framework—a snail’s-pace process that revolves around “creditor committees” of bilateral lenders.

Most importantly, it is crucial that the international community quickly approves the IMF’s $650 billion SDR allocation and then redirects one hundred billion dollars of those funds from advanced economies to low-income countries. IMF insiders, who asked to remain anonymous to discuss the state of play, tell us that deliberations on both steps in the process have been handicapped by lack of consensus over how the money will be used once countries receive their SDR apportionments and whether already-heavy debt burdens will increase even more due to shifting funds from high-income to low-income countries. Other proposals to assist heavily indebted countries with IMF funds also remain under discussion.

The pandemic hit as many African nations had weaned themselves off of aid dependency and come to rely on access to borrowing from private capital markets. But when the crisis hit and caused many debt loads to become unsustainable, the private lenders failed to participate in the G20’s debt-service moratorium. G20 governments must make a push to bring the private sector into the debt-relief process. Commercial banks and institutional bondholders hold more than 30 percent of Africa’s debt, and so far those creditors have refused to participate in any debt-relief initiative that goes beyond case-by-case negotiations.

Meanwhile, some governments remain hesitant about DSSI out of fear that credit-rating agencies will downgrade their bonds and limit their access to capital markets. The effort to induce voluntary private sector participation in the DSSI and Common Framework has been a failure. This has been underlined in Chad, one of the three countries currently negotiating debt relief with official creditors under the Common Framework, where government lenders are closing in on a restructuring agreement but have done no more than urge private creditors to join the effort.

This process has run its course, and the G20 needs to require that banks and asset managers participate in the debt-relief effort. There are several innovative proposals for addressing the debt issue in ways that free up funding for African countries, notably from the UN Economic Commission for Africa. But governments need to force the issue with private lenders, as they have during previous debt restructurings from South Korea in 1997 to Argentina last year.

A commitment across these three fronts is particularly urgent with the onset of the third wave because of its frightening trajectory across the continent. Africa has already waited long enough: It should not have to wait five hundred more days—or even longer—for the international community to provide comprehensive assistance.

Vasuki Shastry, formerly with the IMF, Monetary Authority of Singapore, and Standard Chartered Bank, is the author of  Has Asia Lost It? Dynamic Past, Turbulent Future. Follow him on Twitter @vshastry.

Jeremy Mark is a senior fellow with the Atlantic Council’s Geoeconomics Center. He previously worked for the IMF and the Asian Wall Street Journal. Follow him on Twitter @JedMark888.

Blue Dot Network represents another chapter for US leadership to address global needs and safeguard the international system from predatory behavior. With the Biden administration’s mission to build back better for the world, it is well poised to make BDN one of its landmark legacies for global good.

Rich countries must live up to their pledges by getting specific about the resources they’re making available to low-income countries—particularly in Africa—to deal with the economic downturn and rising debt. The meeting of G20 finance ministers on February 26 will provide an opportunity to fill in the policy blanks.

Image: A health worker vaccinates a man against coronavirus in Harare, Zimbabwe on February 18, 2021. Photo via REUTERS/Philimon Bulawayo