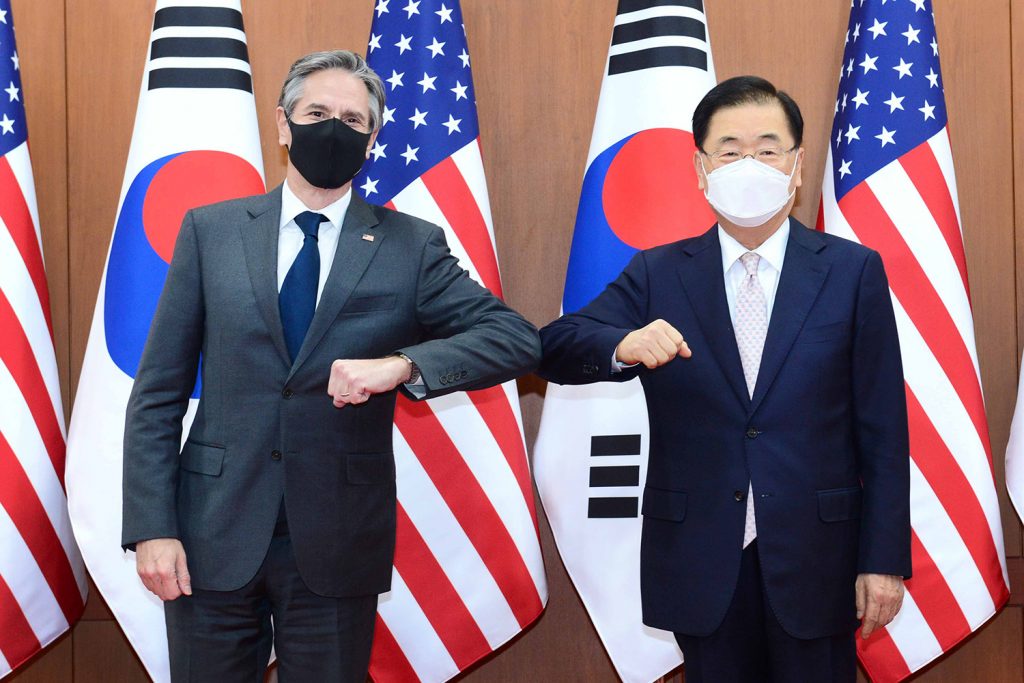 The alliance between the United States and Republic of Korea (ROK) was seriously undermined by Donald Trump’s transactional approach of gauging it merely in terms of monetary contributions. In the former US president’s view, the partnership did not have any intrinsic value and was instead tradeable—something that could be downgraded at any time. Trump trivialized the alliance to the extent of jeopardizing its very existence, showing willingness to stop joint military exercises that he called “war games” and reportedly threatening to withdraw US forces from South Korea if Seoul did not pay five billion dollars for them.

In South Korea, the Moon Jae-in administration also contributed to the devaluation of the alliance with the United States. Instead of strengthening security ties with the United States in the face of increasing nuclear and missile threats from North Korea, the South Korean government made inter-Korean relations a strategic priority and put more emphasis on constructing a peace regime on the Korean peninsula through cooperation with North Korea. The Moon administration showed uncertainty about whether South Korea would join the US-led campaign to counter China, and a spineless posture toward Beijing by declaring its “Three Nos” position when China retaliated against South Korean businesses after the deployment of the US missile-defense system THAAD on the Korean peninsula. When Chinese President Xi Jinping, marking the seventieth anniversary of China’s entry into the Korean War in October 2020, described Chinese participation in the conflict as a glorious victory against American imperialism, the Moon government shied away from commenting on the issue even though the interpretation went diametrically against the South Korean position. In prioritizing peace with North Korea, hesitating to join the US-led alliance network, and adopting a low-key diplomatic profile with regard to China, the Moon administration weakened its partnership with Washington.

First of all, the alliance’s mission should go beyond addressing the threat posed by North Korea’s nuclear weapons. And it should not be leveraged to expand inter-Korean cooperation, as some high-ranking officials in the Moon administration have suggested they would like to do. Minister of Unification Lee In-young, for example, has expressed his aspiration that “US-Korean relations may turn into an alliance for peace that goes beyond the military alliance and Cold War-era alliance.” This suggests that the alliance is not for defending South Korea from North Korean attack but rather for brokering peace with North Korea. The US-ROK alliance, however, is not merely a bargaining chip to be traded at North Korea’s request in order to improve inter-Korean ties or to serve as an incentive for North Korean denuclearization. We should not forget that the alliance has existed since the end of the Korean War—many decades before Pyongyang seriously began developing its nuclear program—for the purpose of deterring traditional military threats from North Korea. It is also noteworthy that the mutual-defense treaty between the United States and South Korea is geared toward defending the Pacific region as well, according to Article III of the pact.

Third, the scope of the US-ROK alliance should also extend beyond the Korean peninsula. The alliance contributes not just to South Korea’s defense against North Korea, but also to the peace and stability of Northeast Asia and the Asia-Pacific. Together with United States Forces Japan (USFJ), United States Forces Korea (USFK) performs the critical role of defending the Western Pacific from rival countries’ intrusions and assertiveness. Camp Humphreys, one of the largest US overseas bases, is strategically located off the Yellow Sea, which the Chinese military uses as a bottleneck. Outside the military arena, South Korea is also a shining example among East Asian countries of multifaceted development. The alliance with the United States made it possible for South Korea to transform itself from a poor country to a rich nation, from an authoritarian regime to a democracy, and from an aid-receiving country to a donor country. Together with Japan, South Korea represents a model case for the success of liberal democracy and open-market economics. Though there is a distorted perception among many observers that South Korea is gradually tilting toward China, the South Korean public clearly favors the United States (73.2 percent) over China (15.7 percent). South Korea, whose interests are not served by the emergence of a regional hegemon in East Asia and the Pacific, should be willing to join the league of democratic countries in the region, including Japan, Australia, New Zealand, and India. Seoul is a natural partner for the global “Summit for Democracy” that Biden is pursuing.

In aiming for these objectives, South Korea and the United States should keep a number of other key considerations in mind if they hope to further upgrade the alliance.

First, while it is impossible in the short term, the United States and South Korea should design new ways to work toward eventually transforming North Korea into a democratic country with an open-market economy. Building a new order on the Korean peninsula that is based on non-autocratic, non-nuclear, and non-closed systems would certainly contribute to the peace and stability of Northeast Asia and the world, while benefiting the North Korean people.

Third, establishing ways to contribute to stabilizing the wider Indo-Pacific region could help revamp the alliance. South Korea, like the United States, has many motivations to maintain an open and rules-based order in the Indo-Pacific. About 90 percent of oil imported from the Middle East to South Korea passes through Indo-Pacific oceans, and more than 30 percent of South Korean exports and imports also navigate through the area. Though South Korea, preoccupied with the military threat from North Korea, may have a limited role to play in terms of providing military security, it has a vast array of other interests in the region—including promoting free trade, human rights, and the rule of law. South Korea can also work with the Organisation for Economic Co-operation and Development’s Development Assistance Committee to build capacity among Southeast Asian countries through measures such as official development assistance and infrastructure investment.

The baseline for the US-ROK alliance going forward is to reinvigorate it so both countries can better advance their bilateral, regional, and global interests. But the United States and South Korea need not stop there. They can also enhance the alliance as one that helps widen and deepen ties among the world’s democratic nations while engaging in competitive coexistence with China and other rival countries.

Cheol Hee Park is a professor at the Graduate School of International Studies at Seoul National University and a nonresident senior fellow at the Atlantic Council’s Asia Security Initiative.

A Biden administration North Korea Strategy should continue dialogue with Kim’s government, backed by a variety of pressure and enforcement tactics, in order to strive for the goal of arms reduction.

Report release: The future of the US-ROK alliance

In a rapidly changing environment, the US and ROK must develop an integrated strategic vision for security in the Indo-Pacific, innovative approaches to denuclearization, and responses to a rising China.

Global value chains in an era of strategic uncertainty: Prospects for US-ROK cooperation

This report investigates key drivers that pose risks to global values chains in an era of strategic uncertainty and provides recommendations for the governments and private sectors of the United States and Republic of Korea.