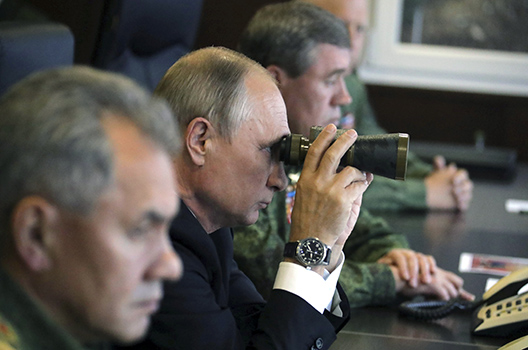 Although the Trump administration’s decision to withdraw from a Cold War era nuclear arms control treaty with Russia was “legally justified,” the decision could “give Russia free rein to rapidly deploy ground-launched versions of its newest cruise missiles and hypersonic weapons,” Alexander Vershbow, a distinguished fellow with the Atlantic Council’s Scowcroft Center for Strategy and Security, warned Congress on February 26.

Vershbow, who is a former NATO deputy secretary general, testified to the House Armed Services Subcommittee on Strategic Forces that Washington’s “allies are concerned that, politically, we may have given a gift to [Russian] President [Vladimir] Putin, who has long sought to escape the INF Treaty’s limitations.”

On February 1, US Secretary of State Mike Pompeo announced the US decision to suspend its participation in the Intermediate-Range Nuclear Forces (INF) Treaty citing Russian violations. “We can no longer be restricted by the treaty while Russia shamelessly violates it,” he said. The US withdrawal will take effect in August.

Vershbow said the US decision is effectively releasing Putin from all of his commitments at a time when the United States and its allies are confronting renewed Russia aggression in Europe. “Today’s Russian leaders may be more prepared to use their nuclear weapons coercively than were Soviet leaders in the 1970s and 1980s as part of their strategy to weaken NATO and reestablish domination over Russia’s neighbors,” Vershbow warned.

Former Republican US senator from Indiana and arms control advocate Richard Lugar, who testified with Vershbow, echoed this warning, while also cautioning lawmakers that “arms control is not just about limits on weapons.” Lugar explained that “much of the value of the treaties comes from verification provisions” that can build trust between partners and lower risk of surprise attacks. “There is safety in transparency,” Lugar maintained.

As the INF Treaty unravels, it has led to fears in Russia that the United States might deploy intermediate-range nuclear missiles in Europe. Putin has said he is ready for a Cuban missile-style crisis (a reference to the Cuban Missile Crisis of 1962) if the United States wanted one. He has also said he would deploy hypersonic nuclear missiles on ships and submarines near US waters. This week, Russian state TV listed US military facilities Russia would target in the event of a nuclear strike.

US President Ronald Reagan and Soviet leader Mikhail Gorbachev signed the INF Treaty in 1987. The treaty banned the possession of ground-based nuclear and conventional missiles with ranges of 500 to 5,500 kilometers. The treaty, which extended to Soviet successor states following the collapse of the Soviet Union in 1991, resulted in the dismantling of almost 2,700 missiles by both sides.

As Vershbow explained, the treaty “had a transformational impact in ending the Cold War and stabilizing the relationship between the West and Moscow for more than three decades.” Cold War negotiators had focused specifically on these close-range missiles because the short period of time required to deploy and use the weapons heightened fears of surprise attacks and escalation by both sides, Vershbow explained.

Despite the importance of the treaty, US officials became concerned that Moscow was developing a new short-range missile, the 9M729, that was in breach of the agreement, and raised these violations with Russian officials as early as 2013. In July 2014, then US President Barack Obama wrote a letter to Putin about the violations, and finally on October 20, 2018, US President Donald J. Trump announced the United States would withdraw from the treaty unless Moscow reversed course on its new missile. With no sufficient answer from Russian officials, US Secretary of State Mike Pompeo said on February 1 that the United States was suspending its participation in the treaty, with a full withdrawal possible in six months.

Vershbow agreed with the Trump administration that “Russia is clearly in breach of its obligations under the treaty.” US officials have also been concerned that Washington is beholden to limitations while other countries, especially China, continue to build arsenals with substantial short-range missiles. Vershbow conceded that these are real concerns for Washington and “the administration has a certain logic in arguing that it is difficult to justify the United States continuing to comply with a treaty that the other side is clearly violating.”

? Amb. @ARVershbow testifies before @HASCDemocrats on #INF withdrawal and implications for the security of the United States. He begins by noting the missile agreement’s impact. 1/ pic.twitter.com/XT0kk6FXMt

Vershbow conceded that there seems to be little motivation in either Washington or Moscow to save the treaty as “it seems inevitable that the treaty will become a dead letter on August 2, six months after the United States gave notice of withdrawal.” Both sides, however, “should not give up on other possible arms control solutions that could, at least, mitigate the effects of the loss of the INF Treaty,” Vershbow argued.

“One possible solution,” Vershbow posited, “would be to challenge Russia to agree to a mutual renunciation of all nuclear-armed, land-based INF-range missiles (including the 9M729) and to agree to mutual inspections to verify that no nuclear-armed versions are deployed by either side.”

Alternatively, he said, both sides could “agree to refrain from deploying any land-based INF systems in or within range of Europe, while permitting some agreed number of such systems in Asia,” in order to address concerns about China and other Asian players who were not limited by the INF Treaty.

“A successor agreement along those lines,” Vershbow argued, “could help maintain stability and avert an unconstrained competition in intermediate range systems.”