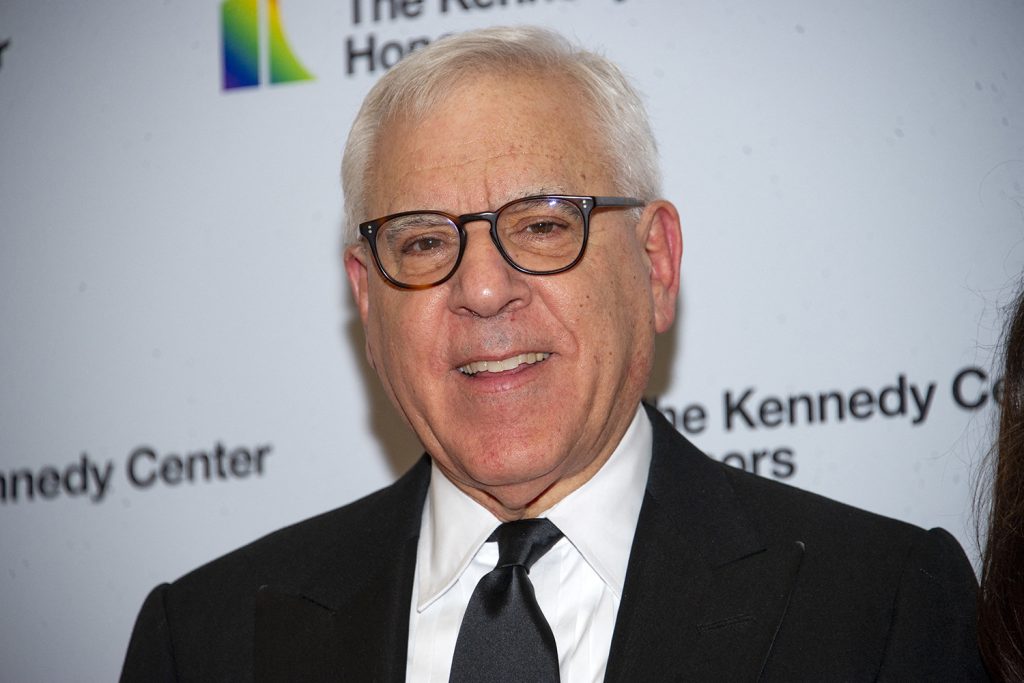 David Rubenstein arrives for the formal Artist's Dinner honoring the recipients of the 42nd Annual Kennedy Center Honors at the United States Department of State in Washington, D.C. on Saturday, December 7, 2019. Photo by Ron Sachs/Pool via CNP/ABACAPRESS.COM)

Private-equity pioneer, financial analyst, and philanthropist David M. Rubenstein offered his take on world events in the shadow of COVID-19—as part of an Atlantic Council Front Page interview with Atlantic Council President and CEO Frederick Kempe on May 14 that covered topics ranging from China’s global influence to the legacy of former US President John F. Kennedy.

As co-founder and co-executive chairman of The Carlyle Group, Rubenstein said he used to travel relentlessly. But stuck in his Bethesda, Maryland, house in the wake of the nation’s worst pandemic in a century, the seventy-year-old billionaire investor said he’s been thinking more than ever about his own mortality.

“I’ve probably spent more time at home in the last thirty days than I have in the past thirty years,” he told Kempe. “When I was growing up, people retired at sixty or sixty-five. I feel no different than when I was sixty. But I’m more fragile now. With this disease, you can be healthy—and then within a week you can get sick and be gone.”

Delving straight into the issues, Kempe asked Rubenstein how COVID-19 will ultimately affect ties between the United States, which leads the world in both coronavirus infections and deaths, and China, where the virus first emerged less than half a year ago.

“This is by far the most important bilateral relationship in the world,” he said, expressing fear that Washington-Beijing ties will worsen before they improve. “You’re going to see people blaming China for a lot of what’s happened. Whether that’s fair or not is another issue, but people running for office won’t see any downside politically. I think it’s important that we not let political exigencies overcome us, and make sure this relationship stays intact.”

There’s no question, he said, that China is playing a much bigger role in Europe, Latin America, Africa, and the Middle East than it did thirty years ago. But that makes perfect sense from the Chinese point of view, he said, considering that for much of world history, China was the world’s dominant political and economic superpower.

“It’s only in the last 100 years or so they’ve fallen down. Now they’re just regaining their rightful position,” he said, noting that this has coincided with a sharp drop in US influence. “After World War II, we were 50 percent of the world’s gross domestic product (GDP). Today we’re at 18 percent. We just cannot do the things we once could afford to do, and politically we can’t get away with it.”

Rubenstein said he’s been surprised at the resilience of the stock market, considering how poorly the US and world economy has performed in recent weeks.

“We have 30 million people unemployed or underemployed right now. It’s worse than a recession, but not quite a depression,” he said. “But things are not going to come back in quite the way people would like. Many employers have learned they can get away without as many employees as they once had. A lot of people who have been laid off are not going to get their jobs back. It’s not going to be a pleasant situation.”

Rubenstein predicted the US economy will continue shrinking “for at least six months, maybe nine months, or maybe even longer.” Yet one consequence of that is an explosion of national debt in order to help the American people through the current crisis.

“When I worked in the White House, our last budget proposed a $59 billion annual deficit. Today, we have trillion-dollar annual budgets as if it’s nothing,” said the former deputy domestic policy advisor to President Jimmy Carter, noting the country’s current deficit of around $4 trillion. “How will we pay for this? We’re looking at $26-27 trillion of indebtedness. We can print money but that’ll produce more inflation. There’s no easy answer. Clearly, getting people back to work is a higher priority at the moment.”

American colleges and universities forced to offer classes only online will also suffer, given that less government money and endowments will be available—and students won’t be willing or able to pay current tuition.

“It will take many years to get back to where we were just a year ago,” said Rubenstein, who over the years has donated more than $100 million to his alma mater, Duke University. Another three institutions—Harvard University, Johns Hopkins University, and the University of Chicago—have received a combined $100 million or so from Rubenstein.

Yet philanthropy is taking a severe hit as well, said Rubenstein, who in 2010 vowed—along with forty other billionaires—to donate more than half of their wealth to charitable causes as part of The Giving Pledge.

“Right now, all philanthropists are struggling with this issue. I’ve been shifting a number of my philanthropic efforts to things of much more immediate importance, like food banks,” he said, recalling TV reports of miles-long lines of cars full of people waiting to receive food donations. “Americans have never had to experience hunger in quite the way they do now.”

Rubenstein also urged viewers to tamp down any unrealistic expectations that the coronavirus pandemic will be defeated quickly.

“We have therapeutic drugs for HIV, but still don’t have a vaccine—or a vaccine for the type of virus that caused the Spanish flu of 1918,” he said. “A lot of people are working on this, but then you have to manufacture billions of doses overnight. That’s not as easy as you might think. And until there’s a vaccine, I just don’t see people travel as much as they did before.”

On a lighter note, Kempe asked Rubenstein—a lifelong voracious reader—what’s on his current reading list. The answer: “Spillover: Animal Infections and the Next Human Pandemic” by David Quammen, and “The Great Influenza: The Story of the Deadliest Pandemic in History” by John Barry.

“Life is fragile and we’re very fortunate to be living in a time when we have the means to avoid the virus and practice social distancing,” Rubenstein advised. “I hope people will be careful and won’t make reckless mistakes because they think they’re healthy.”

Turning the tables, Rubenstein challenged Kempe to name one of the most influential politicians of the postwar era.

“Helmut Kohl is one of the most underestimated leaders of our time,” Kempe responded without hesitation. “Everyone takes for granted that the Soviet Union has fallen and that communism is gone. But at one time, we were armed to the teeth with nuclear weapons. Helmut Kohl negotiated an outcome with the Soviets because he was joined at the hip with the US. He kept Europe unified when it could have fallen apart. He gave up the deutsche mark for the euro. Without his work, Germany would not have had a peaceful reunification, nor an end to the Cold War.”

Before wrapping up, Kempe asked Rubenstein what advice he’d give young entrepreneurs.

“You can’t plan your life. You never know where it’ll go, so don’t worry about where you’ll be at sixty,” he suggested. “There’s no point in making a lot of money or having lots of possessions if you don’t make the world a better place.”

Rubenstein added: “Experiment. Try different things, and find something you love doing with a passion. Nobody ever won a Nobel Prize doing what they hate.”

This paper is a preliminary look at the geopolitical implications of the COVID-19 pandemic and sketches three scenarios for the possible direction of the global system post-COVID-19.

Forging national renewal from the wreckage of coronavirus