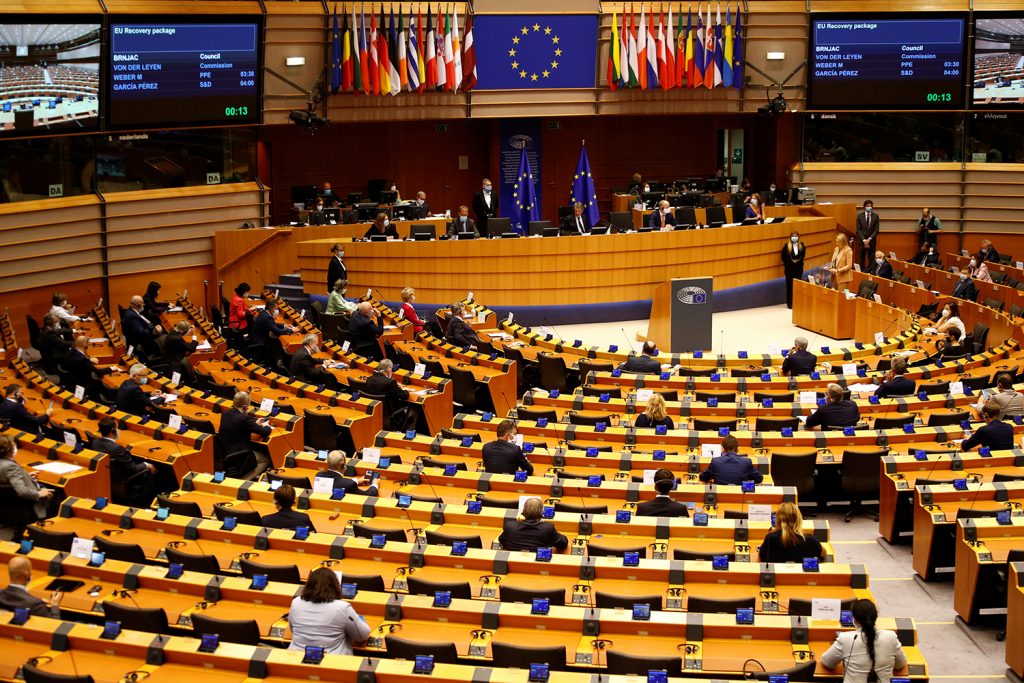 Top officials from Italy and Spain—the two European Union member states hit hardest by the coronavirus pandemic—praised the EU’s May 27 announcement of a €750 billion ($826.5 billion) recovery program to rescue the bloc from its worst economic crisis in its history.

But the stimulus package must still be negotiated, and the road ahead won’t be easy, they warned.

Vincenzo Amendola, Italy’s minister of European affairs, and Juan González-Barba Pera, Spain’s state secretary for the EU, spoke May 29 via Zoom with Alexis Crow of the Atlantic Council’s Global Business and Economics Program.

The conversation, introduced by Benjamin Haddad, director of the Council’s Future Europe Initiative, was co-sponsored by the National Italian American Foundation.

“These days are very tough, not just for Europe but also for the US and others. So we need to get out from this crisis with a recovery plan. It means investing in our industrial base and our value chain,” said Italy’s Amendola. “The EU must be more green, and more digital. We are ready to do whatever it takes to defend European solidarity for future generations.”

Spain’s González-Barba said “there was no other way out” of the upheaval caused by two months of lockdowns, which has devastated the economies of Europe.

In terms of loss of life, Italy as of May 29 ranked third in the world after the United States and Britain, with 33,142 deaths attributed to COVID-19; Spain was fifth, with 27,119 deaths.

Earlier this week, Christine Lagarde, president of the European Central Bank, predicted that the eurozone economy could shrink by up to 12 percent this year.

“We have been advocating for a sort of Marshall Plan since the beginning of the crisis, and it’s amazing what we’ve managed to do in these past eight weeks,” said González-Barba, Spain’s former ambassador to Turkey.

“The EU is built upon the wishes of our citizens, and we cannot lose the fight for public opinion,” he added. “In Spain, we’ve always been European enthusiasts, but lately, the EU’s wider acceptance has not been unanimous. Some parties have started to become euroskeptic, and it was important to receive such a boost in terms of support. Public opinion has reacted accordingly. But we still have to negotiate the whole package. It will be an uphill battle.”

Under the plan, which requires approval from all twenty-seven member states as well as the European Parliament, the EU will borrow €750 billion by issuing long-term government bonds on international markets, then distribute that money via €500 billion in grants to member states and €250 billion via loans.

Amendola said reaction to the announcement in Brussels was “fantastic” compared to the Greek financial panic of 2011-12, when huge divisions erupted between wealthier countries of Northern Europe and those in the south—including France, Italy, and Spain—which have called for a common EU response to the crisis.

“Twenty-seven countries with different narratives, are uniting and standing together to defend the European architecture. For the first time, we’ve borrowed on the market. It’s a question of investment,” Amendola said. “We have to react against the recession, but also invest in new industrial bases and a green vision for the future.”

Gonzalez-Barba noted that “even in the so-called frugal countries, economists, and think tanks are advocating for a strong fiscal stimulus to get us out of this crisis.”

To be sure, Sweden and the Netherlands are likely to raise objections when EU member states meet June 18 to thrash out the details. Yet Germany and France appear to be on board. González-Barba said that Germany—with 83.2 million people and a gross domestic product of $3.9 trillion—is the EU’s most powerful member state, and that “German leaders tend to see with greater ease than others where national and European interests lie.”

Asked how capital markets are likely to respond to the EU’s unprecedented levels of spending, he said Spain has seen a surge in savings accounts as households worry about the future in the absence of a vaccine against COVID-19.

“First of all, this is a one-off crisis. There will be frontloading vast amounts of funds that are going to be raised on the market. It should not be a precedent,” González-Barba replied. “In this case, there was no moral hazard implied. We have been growing at about 3 percent consistently in the last four to five years, and had reduced unemployment from the heights reached in 2012—nearly 25 percent here in Spain—so no one can accuse us of not implementing reforms.”

Another lesson learned from the eurozone crisis is that “no one should be left behind,” he said, recalling the 2017 EU Social Summit in Gothenburg, Sweden, which leaders presented a European Pillar of Social Rights. “This is an issue that as a progressive government we want to push,” he said. “The EU is not only about capital and markets, but also social issues.”

González-Barba said several times that it’s in the EU’s DNA to take a multilateral approach to such crises, leading him to predict that “frankly, I think there won’t be any vetoes” when the €750 billion stimulus package comes up for a vote.

Image: Members of the European Parliament are seen during a plenary session on a new proposal for the EU's joint 2021-27 budget and an accompanying Recovery Instrument to kickstart economic activity in the bloc ravaged by the coronavirus disease (COVID-19) outbreak, in Brussels, Belgium, May 27, 2020. REUTERS/Johanna Geron