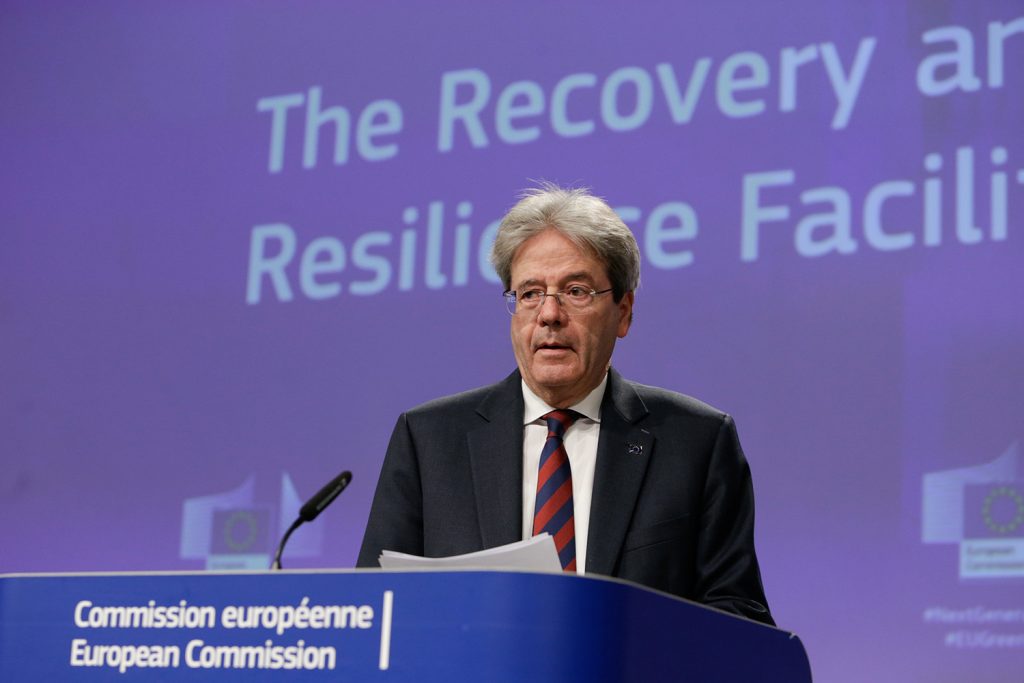 Amidst high expectations, the European Commission has just released its proposed €750 billion recovery plan labeled “Next Generation EU,” as a “temporary reinforcement” of its draft budget of €1.1 trillion for 2021-2027. Built on the suggestion by German Chancellor Angela Merkel and French President Emmanuel Macron of a €500 billion recovery fund based on borrowing by the EU on capital markets and disbursed to members through grants, such a fiscal package has been viewed by some observers as signaling a “Hamilton” moment for the EU. This is an analogy to the agreement Alexander Hamilton was able to secure in 1790 for the US federal government to assume states’ debt (used to finance the Revolutionary War) and to fund those debts by issuing federal government bonds to be repaid by new tariffs on imports—thus strengthening the financial position of the newly established federal government. While the EU recovery plan is a good step toward more fiscal cohesion, it is nowhere near fostering a fiscal union—hence the analogy is not quite accurate.

The EU recovery plan consists of three pillars. The first pillar contains the most important instrument, the Recovery and Resilience Facility of €560 billion, €310 billion of which will be in grants, €250 billion in loans (adding in other programs, the grant portion will come to €451 billion of the €750 billion total). This recovery facility will support regions and sectors in need, with projects in line with EU priorities for a green and digital transformation of the economy. In addition, there is €95 billion to top up cohesion policy programs and to support a Just Transition Fund to help member states moving toward climate neutrality. The second pillar aims to kickstart the economy, by leveraging €56.3 billion (hopefully) by a factor of ten to get private sector participation in providing solvency support for viable companies and other investment projects. The third pillar of €38.7 billion addresses the health care needs revealed by the COVID-19 pandemic.

There are several novel features in the proposal. First, the EU will borrow the €750 billion on international capital markets. This represents a big step-up in issuance, after traditionally modest bond issues to fund various programs, resulting in an outstanding amount of about €50 billion. The new issuance should be welcome by market participants eager to acquire European safe AAA (except AA from S&P) assets. The bond issue will be repaid in the period 2028-2058 from the EU budget, to which member states contribute according to their relative shares of the EU economy. As such, the new EU borrowing is not the joint Eurobond or Coronabond that some have proposed with “joint and several” liability among the member states.

Second, grants in substantial amounts are a new feature compared to the traditional use of loans to support members in need, albeit at lower interest rates than those members can get on capital markets. However, since member states contribute to the EU budget, the net transfer portion of any grant to a member is much less than what the headline numbers may suggest. For example, according to Commission staff estimates, the net transfer to Italy taking into account allocation (including the grant element) of €153 billion and its budget contribution will amount to €56.7 billion (3.2% of gross domestic product—GDP) over the next several years—a useful amount but not a game changer given the fact that Italy’s government debt will jump by about 20 percentage points of GDP to more than 155 percent this year. As expected, the northern countries including Germany and the “frugal four” (the Netherlands, Austria, Denmark, and Sweden) will become net contributors to the plan, in the range of 3.5%-5.4% of Gross National Income (GNI).

Third, the Commission has also proposed to raise its own resources ceiling (maximum amount of resources in any given year that can be called from member states)—currently at 1.2% of GNI to 1.4% to accommodate Brexit, and adding a “temporary and ring-fenced” element of 0.6% to come to 2 percent of GNI—so as to create sufficient fiscal headroom to borrow in capital markets. The 0.6% temporary element will be removed when the new bond issue is paid off. Furthermore, the Commission has also suggested new ways to raise its own revenues—namely via an extended Emission Trading System (estimated to raise €10 billion per year); a tax on big corporations benefiting from the Single Market (raising €10 billion per year); carbon border adjustment mechanism (raising €5-14 billion per year) and a digital tax on companies with global turnover greater than €750 million (raising €1.3 billion per year—this however will put the EU in conflict with the United States which has threatened to retaliate with tariffs if any European country implements a digital tax).

Counting the previously approved stimulus package of €540 billion (for unemployment insurance support and European Stability Mechanism facility), the just announced €750 billion “Next Generation EU” recovery plan, reinforcing a €1.1 trillion 2021-2027 budget (itself representing an almost 15% increase from the 2014-2020 budget), the total amount of fiscal mobilization comes to €2.39 trillion—quite a robust and unprecedented step. The recovery plan and 2021-2017 budget proposal will be on the agenda of the next European Council meeting on June 18-19, with intense debate in particular with the “frugal four” going on until then. The fact that the proposal contains a mix of loans and grants (of somewhat smaller amount compared to the Merkel-Macron suggestion), presented as an “one-off” temporary addition to the budget (which all member states contribute to and unanimously approve) can create some room for compromise. It will then be debated in the European Parliament with final approval planned for December.

On balance, the large volume of fiscal measures funded in part by substantial borrowing by the EU, increasing the Commission’s own resources ceiling and adding new ways to raise own  revenues— which enables the Commission to implement more EU-wide measures—as well as accepting the principle of grants, are positive steps that move a good way toward more fiscal cohesion, demonstrating solidarity to fiscally-challenged member states. These moves have been positively received in financial markets, reducing pressures on the European Central Bank (ECB) to buy bonds of highly indebted member countries. The proposal can be said to reflect a “Merkel” moment, as her legacy to the cause of European integration.

However, these measures do not constitute a fiscal union—which can only come about by Treaty change. Here lies the relevance of the German Constitutional Court’s ruling in early May. The EU, the Euro Area, and the ECB can try to take incremental steps to sustain the Union and the euro during crises, but until the EU Treaty is changed from the “Articles of Confederation” to a “Federal Constitution,” tension within the Union and the Euro Area will remain.

EU looks for next step in coronavirus economic response

An agreement within the EU to not only jointly issue debt, but to disburse the proceeds of those debt issuances in the form of grants to financially weaker member states, would be an important moment in capital markets.