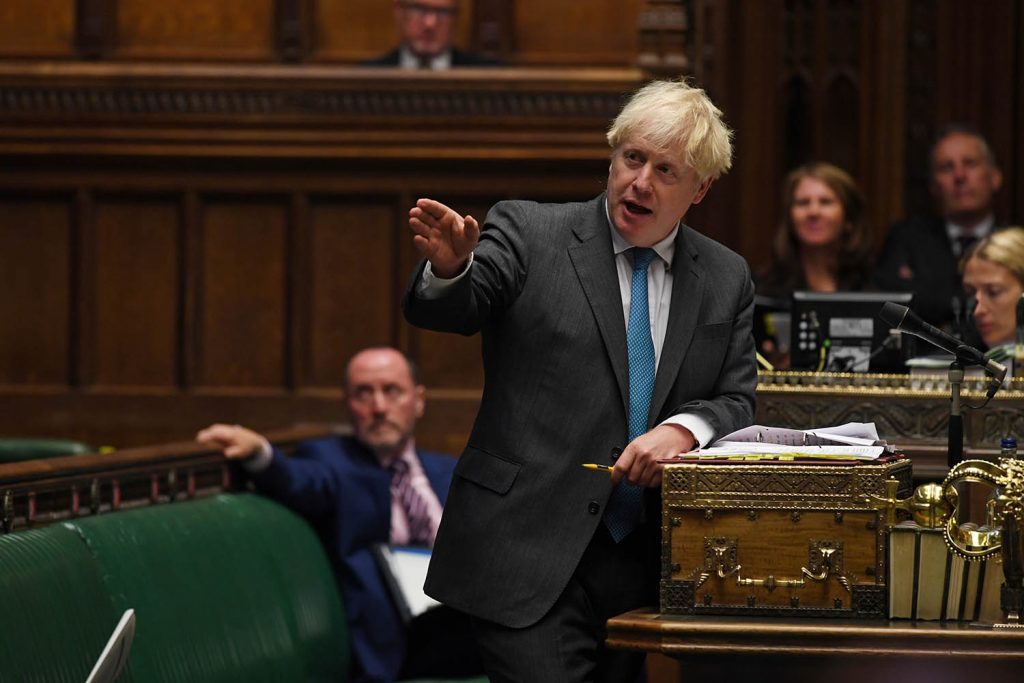 The two issues are already prompting calls for a major cabinet reshuffle and warnings that Johnson, despite holding a very large eighty-seat majority in parliament, may have just six months to save his premiership.

Sacrificing one deal for another?

For the UK’s foreign partners, the most pressing issue is the fallout from the declaration by the Government a week ago that new legislation to cover Britain’s internal market would openly break the Withdrawal Agreement on the UK’s exit from the European Union that Prime Minister Boris Johnson signed with the European Commission less than a year ago.

The Government has insisted that current negotiations with the European Commission on a trade deal to replace British membership of the European Union must be concluded by October 15, in effect to provide some breathing space for new border traffic handling arrangements to be put in place once the current interim period under which British and EU regulations remain exactly the same ends on  December 31. EU Commission President Ursula von der Leyen has said she is hopeful that a trade agreement can be concluded by then, but remains insistent that Britain must drop the clauses in its Internal Market Bill that would break the existing Withdrawal Agreement.

So either the UK or the EU must give way if an agreement is to be reached, or else they must repeat the fudge of the original Withdrawal Agreement. This means the UK may well be on the brink of completing its exit from the EU without any follow-on agreement to ensure the smooth continuation of trade when the current transition period ends on December 31.

For its part, the Government is moving to assuage the fears of rebel parliamentarians in its own Conservative Party by saying that although it will not remove the bill’s controversial clauses, which it openly admits will break the Withdrawal Agreement, it will agree to a parliamentary vote before invoking their use.

The clauses relate to the extraordinarily complex issue of how to ensure that the UK and the European Union go their separate ways on economic development and customs arrangements without instituting a hard border between the Republic of Ireland, which is a member of the EU, and Northern Ireland, which is part of the United Kingdom. The Withdrawal Agreement was supposed to have resolved this issue, but the UK government argues that the unity of the United Kingdom itself—in this context, the need to ensure there are no de-facto restrictions on goods from the British mainland entering Northern Ireland—requires the UK to “disapply” elements of the Withdrawal Agreement “in certain very tightly defined circumstances.”

A longer-term problem for Johnson is that his vision of Global Britain is based on signing a whole set of free trade agreements, that would prove the UK does not need to be a member of the EU to ensure its commercial wellbeing and that an accord with the United States is top of the list. But a UK-US trade deal is now threatened by concern in the Democrat-controlled US House of Representatives that British government’s preparedness to break the Withdrawal Agreement could seriously damage the 1998 Good Friday agreement, which ended thirty years of violence in Northern Ireland. The Democrats’ concern about the UK policy was epitomized by a tweet from Presidential candidate Joe Biden on September 16.

In Washington, on September 17, British Foreign Secretary Dominic Raab sought to allay such concerns in a conversation with Atlantic Council’s Damon Wilson.

“We’ve undertaken and committed to all of the things we said we would do in the withdrawal agreement. There are, of course, obligations that go the other way in terms of protecting not just the single market of the EU, but the internal market of the United Kingdom, the trade between Northern Ireland and the rest of Britain. That was clearly written in, as was protecting the Good Friday Agreement.

“What we can’t have is the EU trying to press on this political (issue), what they, I think, perceive as a point of vulnerability with the U.K. in order to erect a regulatory border down the Irish Sea. So we’ve taken a reserve power. It’s a defensive power.”

The problem here, as Labour Opposition Leader Keir Starmer made clear when he rebutted Johnson in the House of Commons on May 9, is that either the British government knew that the problem of regulatory conditions in the Irish Sea existed when it signed the Withdrawal Agreement on January 24  or that its ministers and lawyers didn’t realize just what they were signing up to.

The results of the Withdrawal Agreement debacle are striking. Britain’s five living former prime ministers—John Major, Tony Blair, Gordon Brown, David Cameron and Theresa May—as well as key legal officers involved in either negotiating or implementing the agreement, have all condemned the government’s move to break its own withdrawal agreement. One of their principal concerns is that it damages Britain’s reputation as a staunch supporter of international law at a time when the UK government is itself condemning the Chinese Government for breaking the agreement under which the UK handed back Hong Kong to China in 1997

On May 16, Allister Heath, the political editor of the Daily Telegraph, a staunch supporter of conservative governments, commented that Johnson has six months left to save his premiership. Heath wrote: “His supporters know that he has it in himself to reach for greatness, but even they are starting to panic as the Government’s failures continue to mount. The collapse of the COVID testing system at the first sighting of a second wave has been bitterly disappointing, and the skirmish over the internal market mishandled.”

The feeling that the Government is simply losing its grip could scarcely have come at a worse time.

For most of the British population, the immediate issue is COVID and, in particular, the massive problems the Government currently faces in trying to deliver effective systems both for testing and contact tracing.

A doubling of the daily rate of COVID cases in the last two weeks has already ensured that several large areas of the UK, including the northeast of England, much of Northwest England and some major urban areas in both Scotland and Wales, are in total or near-total lockdown while the Government’s scientific advisers are reported to be arguing that a further nationwide lockdown might very soon be required to act as a circuit breaker.

But will people obey fresh lockdown orders? Government messaging on the rules for social behavior in the face of COVID is already prompting considerable uncertainty and complaints of unfairness, epitomized by edicts that in England only six people can gather together indoors for a chat or for dinner but up to thirty can meet outside to shoot grouse. In Scotland, at least, children under the age of twelve are excluded from the ‘Rule of Six’ while in Wales children under the age of eleven are excluded. Not so in England, where there are no exemptions for children.

At the same time, the inability to conduct and process COVID testing is leading to endless stories of key workers who either cannot secure a test at all or who are being asked to drive hundreds of miles to what the automated testing website says is their nearest available center.

The Government’s responses to such concerns have been lackluster, to say the least. Health Secretary Matt Hancock, addressing the House of Commons on September 15, once again stressed the capacity the Government supposedly had in place for testing, rather than the actual number of tests conducted or properly evaluated. “The good news is that capacity is at record levels and that a record number of people are able to get tests. I do not deny that it is an enormous challenge. When a service is free, it is inevitable that demand will rise.”

Likewise, Jacob Rees-Mogg, the senior government minister in charge of parliamentary business, appeared to dismiss the concerns of testing access when he told the House of Commons on September 17: “Instead of this endless carping, with people saying it is difficult to get them, we should be celebrating this phenomenal success of the British nation in getting up to a quarter of a million tests for a disease that nobody knew about until earlier in the year.”

The Brexit and COVID issues come together in a manner which poses one particularly worrisome question: whether a government that has said it is prepared to break its own agreements is actually in a position to stand up to those who defy its latest COVID-related rules by rejecting social distancing, mask-wearing and, above all, breaking the ‘Rule of Six.’

Johnson, just nine months after his crushing electoral victory, is now feeling the heat, both from the UK public and his own party.

Is British Prime Minister Boris Johnson really putting the Northern Ireland peace agreement at risk, or is it just a ploy to improve the UK’s position in negotiating a post-Brexit trade agreement?