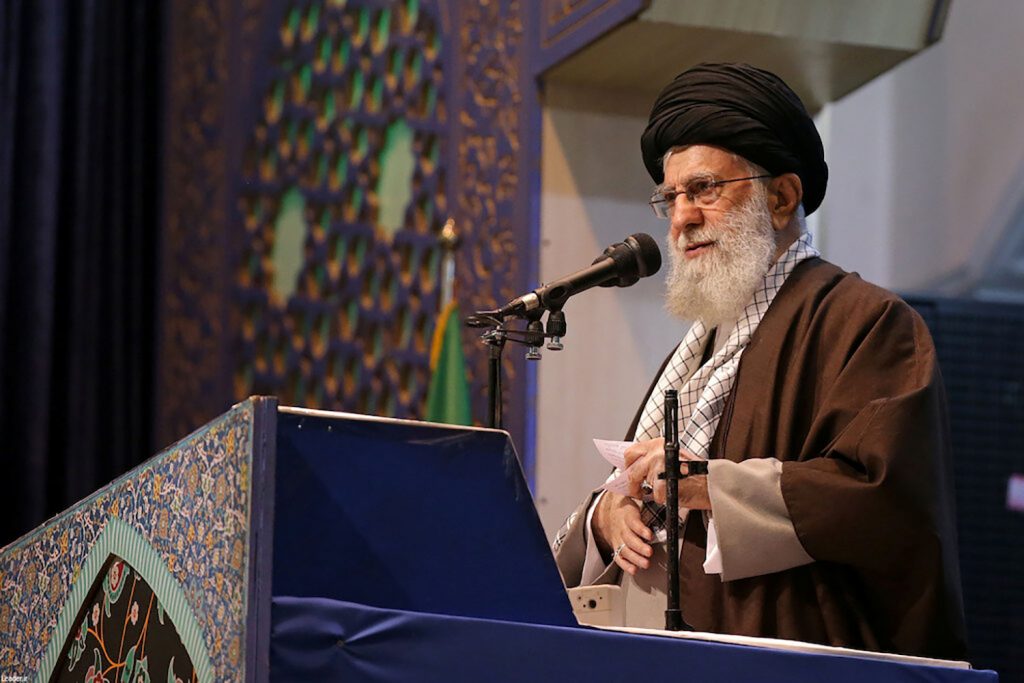 Iranian Supreme Leader Ayatollah Ali Khamenei used a sermon on January 17 to call for the removal of the United States from the Middle East and deflect attention away from growing public unrest within Iran. Khamenei, who led Friday prayers in Tehran for the first time in eight years, blasted US leaders as “clowns” in response to the killing of Islamic Revolutionary Guards Corps (IRGC) Quds Force commander Major General Qasem Soleimani by a US drone strike on January 3.

In retaliation for the strike, Iran launched dozens of missiles at Iraqi military installations housing US troops on January 8. During the action, a Ukrainian airliner was mistakenly shot down, killing 176 people. The accident has sparked further anti-government protests within Iran, which led US President Donald J. Trump to tweet on January 11 that he and his “administration will continue to stand with” the Iranian people. Khamenei responded on January 17 by saying that “these American clowns lie in utter viciousness that they stand with the Iranian people,” adding that if Washington stands by Iranians “it is only to stab them in the heart with [their] venomous daggers.” He further labelled protestors as “stooges of the United States.”

“The Supreme Leader of Iran only addresses Friday prayers at a moment of crisis for the Islamic Republic and its region. The current situation clearly qualifies in the aftermath of the US assassination by drone of Quds Force leader Qasem Soleimani, the Iranian attack on US targets in Iraq, and the accidental shoot down of a Ukrainian airliner. While describing the latter as a tragedy and expressing condolences to the primarily Iranian victims and their families, Khamenei otherwise stuck to the hardest of hard lines, ruling out any new talks with the Trump administration, which he derided as a bunch of “clowns.”

“Addressing a wider regional audience in Arabic, Khamenei vowed to continue efforts to eject US forces from Iraq and the region as a whole and called the Quds Force, the elite overseas branch of the Revolutionary Guards, “fighters without borders.”

“Resistance must continue until the region is completely freed from the enemy’s tyranny,” he said. Those placing hopes in recent protests in Iran to shake—or even overturn—the system underestimate its power and ruthlessness.”

“For the first time in eight years, Iranian Supreme Leader Ali Khamenei appeared in public at Friday prayers, making a fiery speech in front of hundreds of supporters. He doubled down on the need for the Iranian regime to crack down on peaceful protesters calling for reforms. He conceded nothing to the demands of the protesters that includes accountability for the Iranian Islamic Revolutionary Guards Corps (IRGC) shooting down a Ukrainian passenger plane, killing 176 people, 147 of whom held Iranian citizenship. (Many were dual nationals.) Speaking in Arabic as well as Persian, he called for the region to rise up and throw the United States out of the Middle East.

“Those who follow both US and Iranian politics closely couldn’t help but note the irony connecting the men leading Iran and United States during this crisis. Both Ayatollah Khamenei and US President Donald J. Trump are proud to appear uncompromising in public. Both have a history of refusing to admit mistakes, both are under domestic pressures at home, and—as the January 17 Khamenei sermon and the January 14 Trump rally in Wisconsin showed—both find strength speaking before crowds of cheering supporters.

“The particular danger in Khamenei’s call to drive the United States out of the Middle East is that Iran’s proxies in Iraq and elsewhere in the Gulf may respond to his call by conducting attacks that target US military or diplomatic facilities. President Trump has made it clear that any attack by Iranian proxies that result in the death of an American will produce a military response. The current lull could evaporate. Further escalation could happen quickly.

“The Trump administration is also sending every signal it can that if the Iraqi government throws US military forces out of Iraq, it will close the dollar window at the New York Federal Reserve Bank and put Baghdad under sanctions comparable to what Iran is under. This would devastate the Iraqi economy to an extent that the Iraqi Kurdistan Region and the predominantly Sunni provinces of western and north-central Iraq would start to ask themselves whether it’s worth staying in an Iraq that is under Tehran’s effective control.

“One of the most concerning lines in Khamenei’s Friday sermon was his insinuation that the United States wants to break up Iraq. His appeal to Iraqi nationalism will appeal to few Iraqis, especially given widespread anti-Iranian protests in Iraq before the January 2 strike that killed IRGC Quds Force Major General Qasem Soleimani and Kataib Hezbollah leader Jamal Ja’far Muhammad Ali al-Ibrahim, better known as Abu Mahdi al-Muhandis.

“The project on which Soleimani and al-Muhandis were both working when they were killed was the establishment within Iraq of a state-within-a-state by institutionalizing Iranian-supported militias loyal to Tehran’s clerical leadership. That, plus Iran’s support for some Iraqi political parties and politicians, has divided Iraq and is leaving it weakened—in contrast to US and Western efforts to help Iraqis build a united, federal Iraq that would not threaten its neighbors. Khamenei’s statement that the United States wants to see Iraq broken up qualifies as disinformation. Tehran’s trying to drive the United States out of Iraq is what could lead to the breakup of the country. It is Iran, not the United States, that would find Iraq’s breakup to be a good thing.

“The other significance of Khamenei’s sermon on January 17 is that he shows no sign of Iran backing away from any part of its policies—repression at home, destabilizing actions abroad. President Trump’s January 14 speech to his supporters was equally uncompromising. The vision that both leaders have for the Middle East is that the other side backs down. This crisis is far from over.”

Masoud Mostajabi, assistant director of the Middle East Programs at the Atlantic Council:

“After eight years, Iran’s Supreme Leader Ali Khamenei, delivered the Friday prayer sermon in Tehran’s Imam Khomeini Grand Mosque. At a time of growing discontent at home and confrontation with the Unites States, Khamenei doubled down on his uncompromising message, suggesting Iran would not seek to ease tensions internationally nor address domestic grievances.

“Insisting that America cannot be trusted, Khamenei claimed that the “Gentlemen” sitting behind the negotiation table, “are the same terrorists that assassinated Qasem Soleimani”, commander of the Quds Force, in Baghdad.

“The speech comes on the heels of the assassination, which led to Iranian retaliation with dozens of missiles launched at two Iraqi bases housing US troops, and an accidental shoot down of a civilian airliner, killing all 176 passengers.

“For many Iranians, the downing of the airplane was a reminder of the cruelty and mismanagement of the Islamic Republic on full display and led to candlelight vigils for the victims, followed by renewed protests across the country calling for the Supreme Leader to step down.

“During his speech, the Supreme Leader expressed his condolences to the families of the victims, while admitting no fault. He went on to claim that foreigners have continued their efforts to deceive Iranians through the press and “overshadow our (Iran’s) accomplishments” citing the missile strikes as “a blow to the dignity and awe of the US as a superpower.”

“Noteworthy during his speech was the sidelining of Iranian protesters’ frustrations of unemployment, corruption, mismanagement; rather labeling them as “stooges of the US”.

“In sum, the speech made clear there will be no change, no reform, only reinforcing the strident policies of the Islamic Republic; continued domestic repression and avoidance of compromise abroad, at any cost.”

Iranians are protesting again: What does it mean?

So far, Iranian security personnel have remained loyal to the regime—again, unlike 1979 when the military and police defected in droves. As long as the repressive apparatus of the government is intact, it is likely that the latest protests will eventually fade as past ones have done, only to be followed by others.