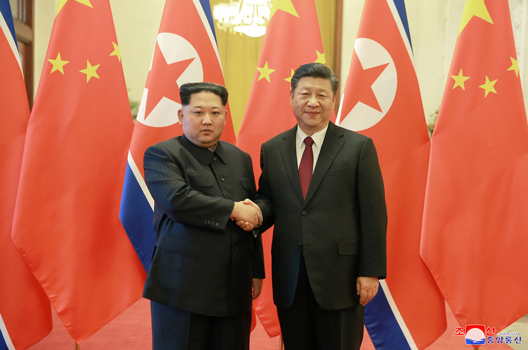 Overnight, China ended the mystery and intrigue of its secret visitor: Yes, it was North Korean leader Kim Jong Un, making his first foreign trip to Beijing. While there, Kim pledged a commitment to North Korean denuclearization.

However, the confirmation of Kim’s first foreign trip since assuming control three years ago only opened the door to the next mystery. Amidst a flurry of activity in the region focused on North Korea’s nuclear activity, what did Kim’s visit to China mean and what will happen next?

His incognito trip took place against the backdrop of a pending summit between North and South Korea in April 2018, and a potential meeting between Kim and US President Donald J. Trump, both meetings complicated by the ongoing North Korean nuclear crisis. A March 27 report by the New York Times, includes a video showing that Pyongyang appears to be firing up a new nuclear reactor.

In light of these concerns, Washington has placed a great deal of pressure on Beijing to take a more active role and urge its neighbors in Pyongyang toward denuclearization.

One imperative of the Xi-Kim summit was to repair a badly tattered relationship with China’s only formal ally. Both leaders spoke of taking new measures to improve strategic communication, as well as both people-to-people and high-level exchanges to “jointly move forward to promote long-term healthy and stable development of China-DPRK relations.”

However, the most significant issue was, of course, denuclearization. Xi reiterated that “China sticks to the goal of denuclearization of the peninsula,” and calls on all parties to support the improvement of inter-Korean ties and take concrete efforts to facilitate peace talks.”

A quick glance at the official photo told much of the story. It depicts Chinese President Xi Jinping, with a cat-that-ate-canary grin stiffly shaking hands with an uncomfortable looking Kim, looking like a teenager forced by parents to go visit relatives.

Though Kim’s trip had all the trappings of an official state visit, including honor guards, limo lines, and banquets at the Diyoutai State guest house, China described the meeting as an “unofficial” visit, presumably done on a Communist Party-to-Korean Worker’s Party basis.  Kim’s visit, at the invite of Xi, “showed his will to carry forward the tradition of DPRK [North Korea]-China friendship.”

While there are no signs that Kim is prepared to follow China’s lead and embark on economic reforms, or that Xi is about to get out his checkbook for Pyongyang, there was a vague proposal to “actively advance peaceful development.” Beijing indicated that it is “ready [for] joint efforts with the DPRK side.” This could be the precursor for more economic cooperation.

However, the summit focused on not just economics, but denuclearization. The timing of Kim’s visit was no coincidence. He needed to “kiss the ring,” and show face in Beijing ahead of any potential meeting with Trump or North-South Korea summit. China has of late remained on the sidelines with regard to the nuclear tension between Washington and Pyongyang. However, the meeting underscored both China’s influence vis-à-vis North Korea and its centrality to any resolution of the nuclear issue.

Though he expressed a commitment to denuclearization, Kim seemed to backtrack a bit on the summit with Trump, saying only that he is willing to have dialogue with the United States and hold a summit between the two countries.

Kim may have asserted cooperation with China, but US intelligence and think-tank analysts may spend the rest of the week trying to unpack Kim’s more elaborate statement:

“The issue of denuclearization of the Korean Peninsula can be resolved if South Korea and the US respond to our efforts with goodwill, create an atmosphere of peace and stability, while taking progressive and synchronous measures for the realization of peace.”

What does “respond to our efforts with goodwill” mean? Lifting economic sanctions? Halting US-Republic of Korea [ROK] military exercises? What does “an atmosphere of peace and stability” mean? Finally, what does “taking progressive and synchronous measures for the realization of peace” mean? A peace treaty? Normalizing US-DPRK relations? Ending sanctions?

Is Kim serious this time? The potential new nuclear reactor raises questions about his motives. His words could be nothing more than a clever gambit to achieve sanctions relief, but there is only one way to find out what Kim is up to—that is to test him. The United States and its allies can do this by putting deals on the table. The upcoming summit between North and South Korea in April will provide an opportunity for the first such test. However, if North Korea raises anything less than terms for denuclearization, such as a nuclear freeze, hold on to your wallets.

Robert A. Manning is a senior fellow with the Asia Security Initiative at the Atlantic Council’s Scowcroft Center for Strategy and Security. You can follow him on Twitter @Rmanning4.