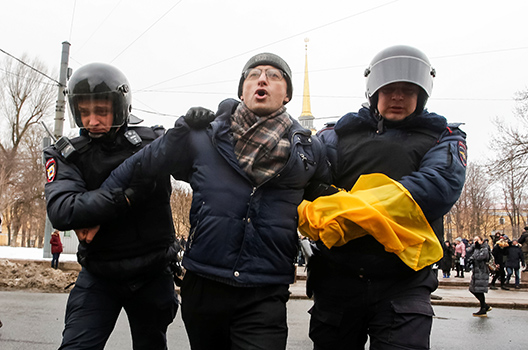 An oppressive political climate marked by a lack of rights and freedoms is now a key factor driving emigration from Russia, according to a new report from the Atlantic Council’s Eurasia Center. This is in stark comparison to emigration before 2012 when economic factors were the primary driver.

Emigres who left Russia  after 2000 “are notably more critical of the Kremlin’s authoritarian policies” than those who left in the 1990s, but the newest batch—those who left after 2012—are unique in that they seem to have left primarily because of this oppression, write Eurasia Center Director John Herbst and Rutgers University professor, Sergei Erofeev, authors of The Putin Exodus: The New Russian Brain Drain

“Our survey confirms that for the new emigration wave, professional and educational ‘pull factors’ have given way to ‘push factors’ like the discomfort of living in a country that limits political activity, human rights, and other freedoms,” the authors write.

The report is based on a survey of 400 Russian emigres living in San Francisco, New York, London, and Berlin. The Atlantic Council survey was conducted from November 2017 to March 2018. All of those surveyed left Russia after 2000. The report also includes information gathered from extensive focus groups with survey participants.

Between 1.6 million to 2 million Russians have left Russia since Vladimir Putin became president in 2000. While certain qualities connect this group, Herbst and Erofeev found a significant shift in attitudes based on whether the emigres left before or after 2012, when Putin re-assumed the presidency after serving as prime minister from 2008 to 2012. When asked for their primary reasons for leaving, many respondents in both groups mentioned economic opportunity, but the post-2012 saw a huge increase in those who left due to the political climate and lack of rights and freedoms.

Herbst and Erofeev found that new emigres demonstrate “a growing pro-Western, liberal orientation and greater politicization in general, including stronger support for the anti-Putin ‘non-systemic” opposition.”

Large-scale emigration from Russia is nothing new. Generations of Russians have journeyed across the world to build new homes after leaving their homeland due to economic hardship, political or religious persecution, or just to seize new opportunities.

Among the newest group, 58 percent of respondents noted that they had “lived comfortably” in Russia prior to leaving, further indicating that economic hardship is less of a motivating factor for emigration than in previous decades.

The emigres surveyed were almost united in their opposition to Putin’s administration. Sixty-five percent  said that Russia was worse off since Putin returned to the presidency in 2012, while only 7 percent said the country had improved. Eighty-six percent of respondents agreed or somewhat agreed that the Putin administration cares mostly about its own interests, rather than the interests of ordinary Russians. Only six percent disagreed.

The group that left Russia after 2012 is “younger, better educated, and skilled in languages. They are more creative, dynamic, and globally aware. The new wave is more diverse culturally and in terms of occupation, more individualistic and self-reliant,” the report says.

Half of the respondents were under the age of thirty-four and 86 percent were under forty-four. Only 19 percent of respondents indicated that they had less than a bachelor’s degree and many said they had multiple higher education degrees.

“So long as authoritarianism and politically connected economic privilege continue in Russia,” the authors write, “talented people will continue to leave.”

While Herbst conceded that “the results of our study are not authoritative” due to the limited sample size, he argued that “our findings provide a good launching point for future work” and demonstrate some lessons for policy makers. Herbst and Erofeev argue that their results show that “the overwhelming majority of the new Russian emigres… are comfortable in the global postindustrial culture and have a strong allegiance to liberal democracy.”

These results should drive policy makers to continue to rhetorically distance the Putin regime from Russian society as a whole, with the authors suggesting that commentators should only refer to “the Kremlin” when talking about the Russian government, rather than the blanket category of “the Russians.”

The liberal political values and continued deep interest in Russian news by the survey respondents also demonstrates how the émigré community can “be a bridge between the West and a Russia that is not destined to be authoritarian,” according to Herbst and Erofeev. “The values and activities of these emigres,” they write, “provide reason to hope that the future may be one that includes cooperation and comity between Russia and the West.”

Human capital is fleeing Russia. Since President Vladimir Putin’s ascent to the presidency, between 1.6 and 2 million Russians – out of a total population of 145 million – have left for Western democracies.