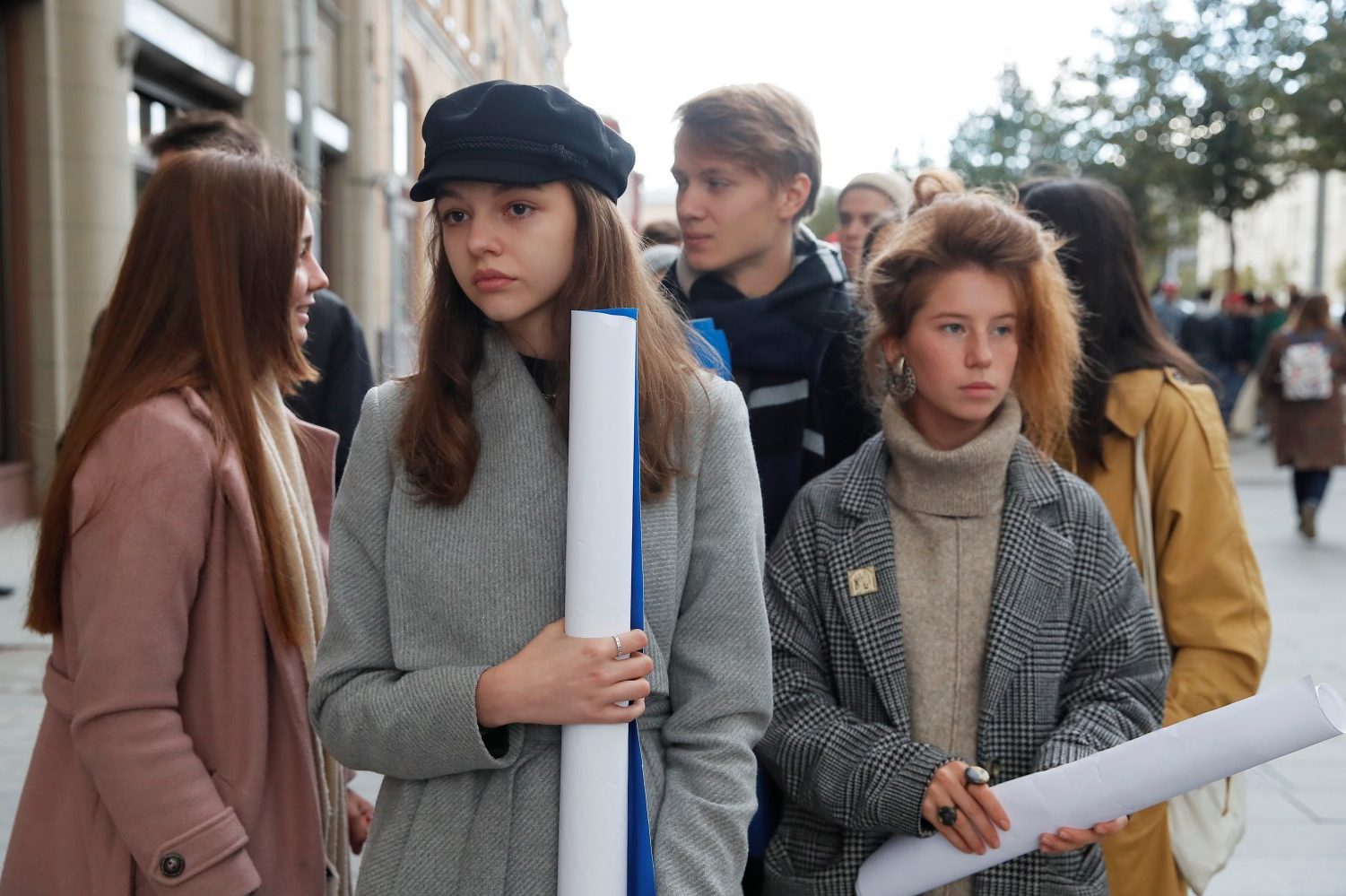 Participants attend a rally in support of Pavel Ustinov, who was sentenced to three and a half years in jail for dislocating a police officer's shoulder when he was arrested during an unauthorised rally to demand free elections, in front of the Presidential Administration building, in Moscow, Russia September 18, 2019. REUTERS/Maxim Shemetov

July and August 2019 saw some of the largest protests in Moscow in recent years. Tens of thousands took to the street to protest the government’s refusal to register independent candidates in the Moscow City Duma elections. Young Russians made up a noticeable group among the protesters—a trend that sociologists and political experts have increasingly registered. This is a sign that civiс awareness in Russia is growing, and young people who first showed up in large numbers to country-wide demonstrations in 2017 are increasingly demanding that the government hear their voices and enter a dialogue. While the specific role of the youth in the Russian protest movement remains unclear, it remains a factor to be watched closely.

It has been a turbulent summer for members of the unapproved Kremlin opposition in Moscow; despite their best efforts, all were banned from running in the September 8 Moscow City Duma elections. Moscow’s electoral authorities denied registration to as many as sixty-two candidates on often absurd grounds. By mid-July, public outrage reached a tipping point and erupted in the form of mass protests—with sanctioned demonstrations on July 20 and August 10 and unsanctioned rallies on July 27 and August 3. Each protest attracted tens of thousands of people, and the turnout only grew as law enforcement brutally cracked down on demonstrators with excessive force and arrests. By some estimates, authorities detained almost 3,000 people and arrested opposition leaders such as Alexei Navalny, Ilya Yashin, Dmitry Gudkov, and Lyubov Sobol. The August 10 protest in Moscow was reportedly the largest since 2011, with 60,000 people turning up on Moscow’s historic Sakharov Avenue.

Turnout for the protests took many observers by surprise, but the abundance of young faces remains a particular interest. According to a random sample poll conducted on August 10, 59 percent of protesters were thirty-five years old or younger, and 23 percent were twenty-five or younger. These statistics echo the numbers of the March 2017 anticorruption protests organized by Navalny, when Russian youth took to the streets en masse and surprised both the Kremlin and the general public.

This summer’s unrest confirmed that young Russians are breaking away from the Kremlin’s clasp and moving toward creating their own political identity. Until a few years ago, the eighteen to thirty-year-old demographic was viewed as the Kremlin’s most loyal and reliable group of supporters—youth support of the president was estimated at 65 percent—but these attitudes have changed dramatically over the last two years. In fact, according to a January 2019 poll by the Public Opinion Foundation, which has since been removed, young people now have the least favorable view of the Russian president—32 percent as opposed to the average of 42 percent among the general population.

Russian youth: a look inside the black box

What is actually going with the young Russians? Are these youngsters, in fact, disinterested in politics and loyal to the regime or have they become aware of the regime’s flaws and begun to look for opportunities to overcome them? Olga Khvostunova and Vladimir Milov look at the trends underlying a shift in the attitudes, beliefs, and values of Russia’s youth today.

At least three major factors are causing this drastic shift. First, the generational gap between the youth and the ruling elite has grown so wide that it is no longer possible to bridge—these groups have diverging interests, priorities, worldviews, and value systems. Second, the Russian youth inhabits the online world—similar to their foreign counterparts and in contrast to older generations. As digital natives, they consume information differently and are largely immune to the Kremlin’s propaganda that flows from national TV networks.

The third factor is the Kremlin’s failed youth outreach policy. Despite early success with its youth movements Idushchie Vmeste, “Walking Together,” and Nashi, “Ours,” the Kremlin still fails to offer a positive agenda or strategic vision for the future. In the long run, the Kremlin’s carrot and stick tactics have failed to rein in young people who are increasingly less driven by so-called “traditional values” imposed by the state, and more by personal goals of self-actualization, growth, and creativity. Career opportunities within the government or state corporations were the only real perks that the Kremlin had been able to offer young people, but these opportunities are now inaccessible since 2014 the Russian economy has been shrinking and kleptocracy and nepotism have flourished.

Still, on average, Russian youth show little interest in politics, which begs the question: what made young Muscovites, arguably the most privileged group among the Russian youth, protest this summer? Indignation over irregularities in the Moscow City Duma elections does not seem to explain their action, especially after it was reported that the turnout at the September 8 election was at a low point of 22 percent.

There are several possible reasons for these outbursts of unrest among the youth. One reason for the protests may lie in the context of the larger social processes unraveling in Russia today. According to economist Mikhail Dmitriev—notable for predicting the 2011-2012 mass Bolotnaya Square protests—Russia is currently undergoing a breakdown of the post-Crimea consensus, which is reflected in social discontent, a decline of public trust in the government, and a demand for change. Dmitriev recently explained, “Negative emotions don’t go anywhere, they build-up, which creates grounds for a potential outburst as a result of some triggering event.”

Other experts have argued that the Moscow protests were the result of growing civic awareness. Russian people, including the youth, increasingly find themselves in conflict with the government and feel the need to assert their dignity and demand a peaceful dialogue with the authorities. In the case of the Moscow elections, the government refused to enter this kind of de-escalatory dialogue.

In his Vedomosti op-ed, Levada analyst Denis Volkov also shared insights from Levada’s August interviews in focus groups. Referring to the Moscow protests, young interviewees said that the “authorities don’t want to let anyone in [the power structure],” and that “they only think about themselves and ignore average people;” that there are “no fair elections” and that the “Constitution doesn’t work.” The police brutality during the protest crackdowns disturbed many Russians—especially the case of Daria Sosnovskyaya, a young woman who was punched in the stomach by a riot police officer.

Political context is another useful lens to understand this new generational divide. Alexander Kynev, an expert in regional politics, echoed the view that Russia’s post-Crimea social consensus is under growing strain. Moscow authorities’ refusal to register independent candidates in the Moscow elections—an obvious injustice—was a trigger for the rallies, but the protest’s sentiment was already there. The government’s reaction to unsanctioned protests—police brutality and mass detentions—only added insult to injury, pushing more people to take to the streets.

According to political commentator Kirill Rogov, the political nature of the protest prevailed not just in Moscow, but also in other parts of the country; there have been recent protests in the northern town of Shies and in Yekaterinburg. The Moscow protests, in his view, revealed that the new generation of Russian youth is highly political and less timid than the older generations. Rogov said, “This youth has a different view of protest, they lack the complex of ‘learned helplessness’ inherent to older generations.” Human rights activist Tatiana Lokshina articulated a similar view of the situation, attributing the large number of young people at the Moscow protests to their not having grown up in the Soviet Union when Russians feared government repression.

Yet another way is to look at the situation is from the psychological perspective of individual and group experiences. Sociologist Olga Zeveleva explained that three hundred of the people detained during the Moscow protests were students, many “facing administrative prosecution, as well as threats from the police and university officials.” One of them, Yegor Zhukov, a Higher School of Economics student, remains under house arrest and could be sentenced to up to five years in prison for alleged calls for extremism on the Internet. In response to the mass detentions, Moscow students mobilized to help each other by building digital resources, such as the Here We Stand project, launched by independent student magazine DOXA. Clearly, for many young Russians, these early experiences with police brutality against their peers will shape their perceptions of the government for years to come, thereby exacerbating social conflict.

Finally, the government’s outright repression of youth culture further delegitimizes the regime in the eyes of young people. Bands and musicians that don’t toe the party line find themselves targeted by government bans—acts like IC3PEAK, Husky, and Monetochka are clear examples. As one Vedomosti columnist noted last December, the Russian authorities try to ban “the most honest music,” the music of the street, which is often dark, tough, brutally honest, and anti-government. Police brutality and lawlessness are recurring themes in what is becoming the “music of protest.” It comes as no surprise that support from popular bands like FACE, Oxxxymiron, Krovostok, and IC3PEAK, who showed up at the August 10 protest, was a significant factor in the high turnout of the youth.

While the high turnout at the Moscow protests makes the case for a public political awakening, the Levada national poll offers sobering statistics. On average, only 20 percent of the Russian people are ready to participate in political protests, and support is highest among the youth age eighteen to twenty-four, at 25 percent, and the lowest among Russians older than fifty-five, at 15 percent. Support for protests against declining living standards, or in support of rights, is slightly higher; 27 percent of Russians said they would join. The reasons for the brewing social discontent are not going anywhere, and there are signs that Russia’s political system is too rigid to adequately address mounting socio-political problems. As Dmitriev observed, the fomenting of public discontent will result in a change of social attitudes, although it is not yet clear what they will be. But opinion polls show a growing demand for political freedoms, respect, and honesty amidst the general crisis of public trust in the government. Under these conditions, the Russian youth with its still-forming attitudes, open-mindedness, and audacity, can play a crucial role in political change in the country.

Olga Khvostunova is the director of the Institute of Modern Russia and editor-in-chief of imrussia.org. She tweets @olgakhvostunova

This publication was created in partnership with