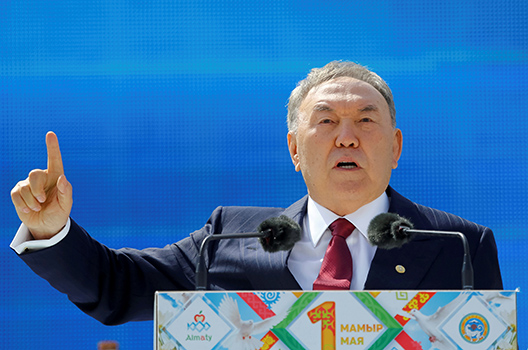 Nursultan Nazarbayev, who has served as the president of Kazakhstan for nearly thirty years, on March 19 abruptly announced his decision to step down from the presidency, but also said he would retain several important posts. The resignation goes into effect on March 20.

“Nursultan Nazarbayev has been an effective leader for Kazakhstan since before independence,” according to John E. Herbst, director of the Atlantic Council’s Eurasia Center, but after resigning his position as president, the question now becomes whether Nazarbayev “and the various clans and other interest groups in the country can come to some sort of understanding on the new leadership.”

Nazarbayev, who is 78, has been in power since 1989, serving both as leader of the Soviet republic of Kazakhstan and then as the only president of the independent Kazakh state. Although resigning his presidential position, Nazarbayev will remain the head of Kazakhstan’s Security Council, a member of the country’s Constitutional Council, and was given “leader for life” status by the Parliament in 2010, a title he will likely retain.

“I have taken a decision, which was not easy for me, to resign as president,” Nazarbayev said on March 19. He announced that Kassym-Jomart Tokayev, the speaker of Kazakhstan’s upper house of Parliament, would serve as interim president.

Nazarbayev “will retain the most influence and power in the country,” Herbst explained, but by moving away from the presidency, “he will have more time to devote to the transition issue.”

According to Herbst, “the looming issue for the country over the past several years has been the impending transition to a new leader as Nazarbayev moves towards his eightieth birthday. The measures announced today suggest that he understands the importance of addressing this issue.”

Iskander Akylbayev, executive director of the Kazakhstan Council on International Relations and a 2018 Atlantic Council Millennium Fellow, said that Tokayev’s appointment will “fully address the requirement of the constitution, provide necessary balance between influence groups, and give a clear message to strategic partners around the world.”

The new president’s “rich diplomatic background will be a significant asset as he tries to maintain a multi-vector foreign policy in relation to Russia, China, the United States, Kazakhstan’s Central Asian neighbors, and the European Union, among others,” according to Akylbayev. Still, he warned, “the next presidential elections scheduled for 2020 will be a real test for Kazakhstan’s power transition.”

Rumors of Nazarbayev’s imminent departure emerged after the president asked the country’s Constitutional Court whether he had the right to resign or not earlier in February. Kazakh authorities have faced mounting pressure as the oil-rich country has struggled to rebound from low oil prices in 2014.

On February 21, Nazarbayev announced that he was sacking the government of Prime Minister Bakytzhan Sagintayev, justified, the president said, because “in many areas of the economy, despite the adoption of many laws and government decisions, positive changes have not been achieved.” Kazakhstan has been particularly hurt by US sanctions on its neighbor Russia. The round of sanctions enacted by the US government in August caused the Kazakh currency to drop more than 10 percent in value during the summer of 2018.

Despite recent economic struggles, Nazarbayev oversaw a dramatic transformation of Kazakhstan in the nearly thirty years of his rule, according to Ariel Cohen, a nonresident senior fellow with the Atlantic Council’s Eurasia Center.

Nazarbayev “took an impoverished former Soviet Republic with no memory of statehood and turned it into a Eurasian success story,” Cohen said. Before independence, Cohen continued, “Kazakhstan was a testing ground for Soviet nuclear weapons and a place where czars and the Bolsheviks sent people to colonize the prairie and to die in the Gulag. Nazarbayev is leaving office with Kazakhstan being more progressive in many respects than its Russian former colonial metropolis.”

Although Kazakhstan enjoyed solid economic growth for most of the last thirty years, Nazarbayev’s tenure has also been marked by unfair elections and a deteriorating human rights record. In 2011, Nazarbayev won re-election with 95.5 percent of the ballots cast, in a contest which the Organization for Security and Cooperation in Europe said was marked by a “non-competitive environment.” Later that same year, police killed at least fourteen unarmed oil strikers in the town of Zhanaozen in western Kazakhstan.

As Nazarbayev leaves the presidency, it remains to be seen who will replace him as the leading political force in the country, at a time of increasing economic pressure.