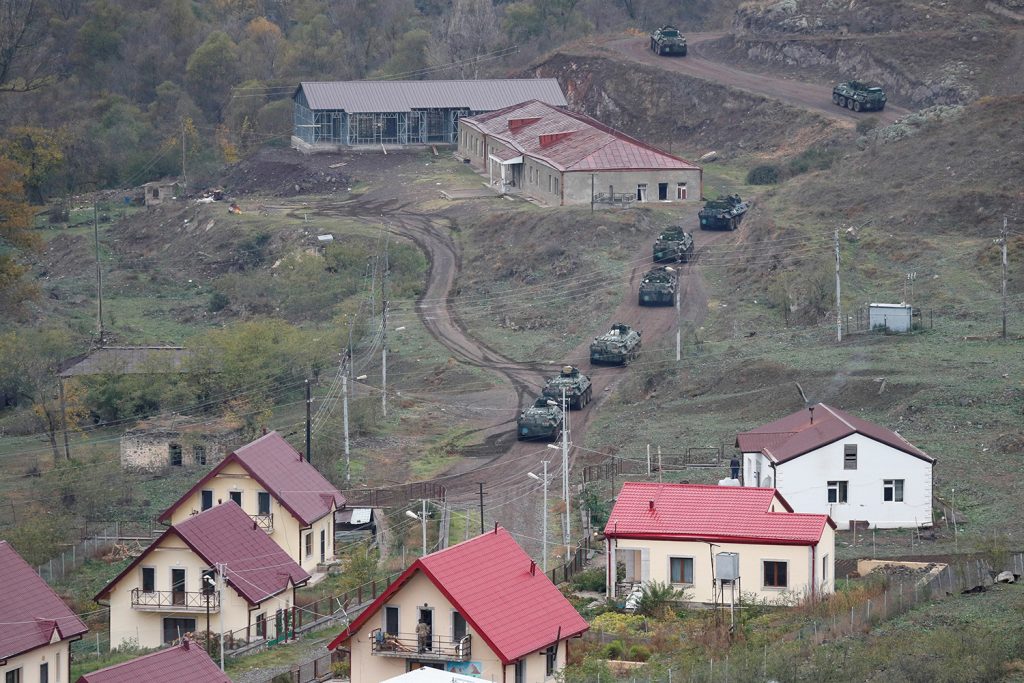 Armoured personnel carriers of the Russian peacekeeping forces drive along a road in a settlement near Lachin in the region of Nagorno-Karabakh, November 13, 2020. REUTERS/Stringer

After six weeks of warfare, Armenia, Azerbaijan, and Russia agreed to a peace deal on November 10 that seems to be more durable than prior agreements. The agreement was finalized after Azerbaijani troops advanced within miles of Stepankert (Khakendi), the capital of Armenian-majority Nagorno-Karabakh, forcing Armenian Prime Minister Nikol Pashinyan to agree to terms.

The peace deal allows for Russian troops to remain as peacekeepers in the region, giving Moscow a toehold for influence in another “near abroad” location. The war leaves Armenia and Azerbaijan with dramatically different domestic situations and a new regional security order, with Russia and Turkey as major players and the United States and Europe on the periphery.

We asked two former US diplomats to analyze what the peace deal means for both Armenia and Azerbaijan, and how the involvement of outside powers has changed the balance of power:

“For nine months in 2017, I was the US co-chair for the Minsk Group Process for Nagorno-Karabakh of the Organization for Security and Cooperation in Europe (OSCE), the other two co-chairs being Russia and France. We traveled frequently to Armenia and Azerbaijan and into Nagorno-Karabakh itself. Established in the early 1990s to solve the historic conflict between Armenia and Azerbaijan over Nagorno-Karabakh, the Minsk Group had by the second decade of the 21st century evolved into a process that put out occasional bush fires but, otherwise, just maintained the status quo. However, during my months of listening to the leadership in Yerevan, Baku, and even Khakendi/Stepanakert, I privately came to the conclusion that eventually war would be inevitable for a “solution,” because all sides were so adamantly dug in to their positions. And now that has happened with the result being dramatic change but no solution.”

“The current war is often reported to have begun on September 27, although it actually began on July 12 when Armenia bombed Azerbaijani territory outside of Nagorno-Karabakh, some say egged on by Russia to “send a signal” to Azerbaijan. Once the war took off in September, the three OSCE co-chair capitals attempted ceasefires, none of which held longer than the time it took to announce them. But now Russia has accomplished not only a ceasefire but has also changed the history of the past twenty-eight years. Armenia will withdraw from the seven Azerbaijani territories it has occupied around Nagorno-Karabakh itself; the United Nations High Commissioner for Refugees (UNHCR) will oversee the return of refugees and displaced people; and Russia’s border guards, reportedly with Turkish assistance, will set up a five-year peacekeeping operation that can then be renewed for another five years. All of this is a stunning reversal for Armenia, and it is still unclear whether Prime Minister Nikol Pashinyan can survive this dramatic reversal.”

“However, the current understanding, as dramatic as it is, does not “solve” Nagorno-Karabakh that has long been listed with the other “prolonged conflicts” of the former Soviet Union in Georgia, Moldova, and Ukraine. It’s important to remember that Russian President Vladimir Putin has frequently declared the countries of the former Soviet Union to be Russia’s “special sphere of influence.” With his imposition/achievement of the current Nagorno-Karabakh understanding, he has cemented Russia’s role in the region.”

“The cease-fire agreement negotiated by Russia creates major changes in the South Caucasus security landscape. The Armenian military will withdraw from the occupied territories and displaced Azerbaijanis will be able to return to their homes. Meanwhile, Russian peacekeepers are being dispatched to Nagorno-Karabakh and the Lachin Corridor connecting Armenia to Nagorno Karabakh. The bottom line is that Azerbaijan regains the occupied territories and the Armenian population in Nagorno-Karabakh will be protected.”

“For many years Russia prevented a resolution of the Nagorno-Karabakh conflict, because a low-level conflict allowed maximum Russian leverage over both countries. But the situation drastically changed over the last few months. Azerbaijan recovered much of the occupied territories militarily and threatened to overrun Nagorno-Karabakh. Only through Russian intervention did Nagorno-Karabakh avoid collapse and Armenia a much more devastating defeat. As a result, Azerbaijan will finally reach its goal of recovering its occupied territories, and Nagorno-Karabakh with Russian protection will maintain on a de facto basis its link to Armenia. This is close to what a final resolution ought to be and will remain in place for the foreseeable future. Western observers hope that Russia will not overreach and try to extend its influence in the two countries beyond its peacekeeping mission.”