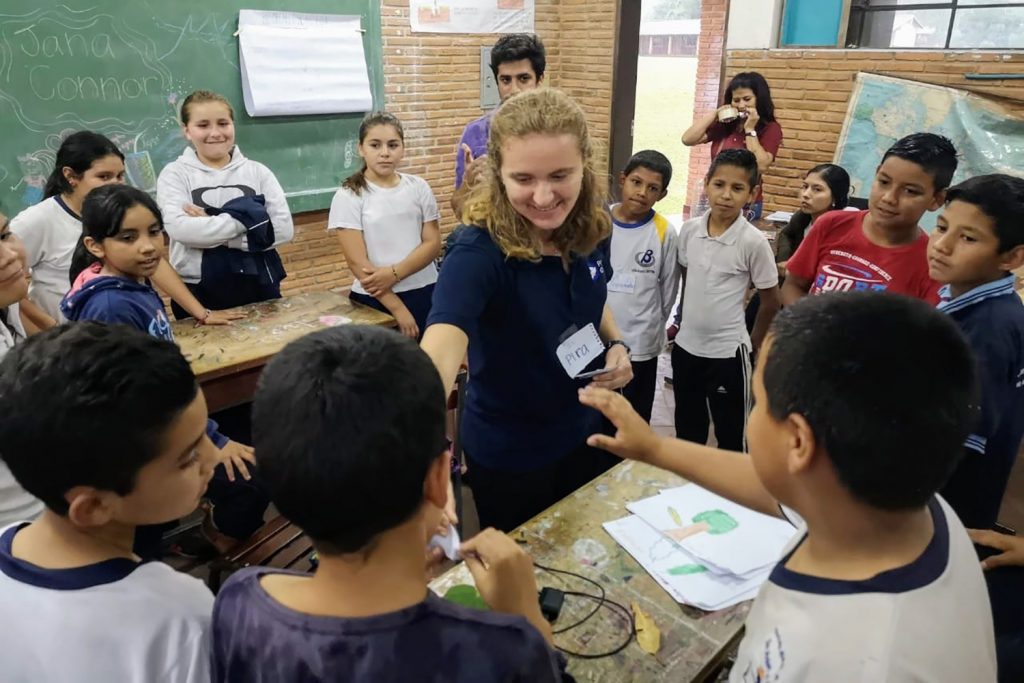 On March 1, over 240,000 returned Peace Corps Volunteers (RPCVs) marked the fifty-ninth anniversary of the volunteer service organization by sharing their unique experiences on social media, in classrooms, or during other special events. Founded in 1961, the Peace Corps sends thousands of Volunteers every year to interested communities across the world to build mutual understanding and provide technical assistance for economic and social development.

Glenn Blumhorst, who served in Guatemala and is president and CEO of the National Peace Corps Association (NPCA), used the anniversary to connect RPCVs with lawmakers to “share their experiences with elected officials on Capitol Hill…who decide the fate of Peace Corps’ future.” According to Blumhorst, Peace Corps “remains highly supported and respected among both Democrats and Republicans.” To continue this support, Blumhorst told me that “two hundred Peace Corps citizen activists, who represented nearly thirty-five states, held approximately 225 meetings,” with lawmakers. “This resulted in approximately 170 House members signing a bipartisan letter urging an additional $40 million for Peace Corps in Fiscal Year 2021. That, coupled with a similar letter in the Senate that has twenty-two signatures and remains open, serves as a strong opening salvo in our efforts to urge Congress that Peace Corps must rebound and remain impactful, independent and strong.”

But despite the positive momentum, Peace Corps was hit with a new challenge. Fourteen days later, Peace Corps Director Dr. Jody Olsen made the unsurprising announcement to evacuate all 7,334 Peace Corps Volunteers worldwide due to the novel coronavirus (COVID-19) outbreak.

Upon hearing the news, Peace Corps applicants, current Volunteers, and returned Volunteers turned to social media to express their heartbroken dismay. Byron L. Williams, who served in both Lesotho and Ukraine, told me that “as an RPCV I understand the work that was involved in building a bond with my communities all the while appreciating the investment they made in me…Thinking about what a community goes through to get a Volunteer and what a Volunteer goes through from application to close-of-service, it pains me all around.” Blumhorst echoed the sentiment, saying “as a community, our collective hearts break for the serving Volunteers whose lives in thousands of communities around the world were suddenly uprooted as they faced a swift departure from adopted families, friends, and counterparts they respect and love.”

Ambassador Lewis Lukens reflected that “our Peace Corps Volunteers are the very best of America and they are tremendous representatives, around the world, of our nation.”

In her letter to Peace Corps Volunteers, Olsen stated that the US government agency would “temporarily suspend all Peace Corps operations globally and evacuate all of our Volunteers.” Blumhorst said that “we understand Peace Corps’ decision to suspend programs across sixty countries, given the growing complexity of the coronavirus in regard to global transportation patterns, border access, and the agency’s stated priority to ensure the health, safety, and security of its 7,000 Volunteers.”

The majority of Volunteers do not live in capitals or major cities, but in communities where transportation can be fragile and irregular. Some Volunteers live on islands, remote mountain areas, or rural areas at least a day’s journey from the closest bank, post office, and reliable electricity. Olsen recognized the difficulty in reaching Volunteers, explaining that “as COVID-19 continues to spread and international travel becomes more and more challenging by the day, we are acting now to safeguard [Volunteers’] well-being and prevent a situation where Volunteers are unable to leave their host countries.”

Although the evacuations are temporary, there is a high level of anxiety over what the future holds. Williams said that Volunteers make a decision “to commit themselves to a successful service that includes learning a language, observing and respectfully participating in another culture, building bonds that feel like family, all the while gaining and sharing skills that can benefit a host community or organization.” Volunteers are juggling abrupt goodbyes to host families and friends and stopping projects mid-execution. “Having to uproot so quickly without closure has to be extremely difficult for both sides,” Williams explained. “Not to mention the relationship that the United States has with each individual country and the services we provide as a government agency.”

Back in the United States, Volunteers face anxiety over having the resources to cover their day-to-day expenses or searching for a new job, all while facing quarantine. A recent op-ed in the Washington Post observed that Volunteers are not eligible to receive unemployment benefits because their service is not defined as a legal employee and employer relationship. Charlotte Stein, who served in Morocco and is the president of the Returned Peace Corps Volunteers of Washington, D.C., an NPCA regional affiliate group, told me that “lodging is a particularly difficult issue right now as evacuees are being given guidance to not return to their home of record if they would be living with someone over the age of sixty-five—and guidance on this varies post by post.”

Many RPCVs observe that the hardest part of their service was readjusting to life back in the United States. Family and friends have changed; the cereal aisle at the grocery store has so many options; English is spoken everywhere; no one marvels when you do regular things like walk, or talk, or sleep, or eat; or, maybe the feeling of air conditioning and central heating feels strange on your skin and in your lungs.

RPCVs have ramped up efforts to support the Peace Corps Volunteers who are coming home. Stein reported that “the network of returned Volunteers has been inspirationally generous and is jumping into action to provide resources and general support for evacuees.” She stressed that more can be done, however, saying “I hope that businesses will be open to making free or very low-cost services available to evacuees.”

Stein is hopeful that the “Peace Corps will bounce back in the best way possible so this program of informal diplomacy can continue. It is essential to increasing understanding between cultures and improving global connections in our increasingly interconnected world.” Blumhorst echoed her sentiments, remarking “the pandemic reminds us that Americans—for better and for worse—are citizens of an interconnected world. Peace Corps Volunteers are essential to our national understanding of that world which contributes to the health, well-being, and security of our country.”

Blumhorst is thankful for the efforts of the Peace Corps Volunteers whose two-year commitment of service has been truncated by the coronavirus. “Our community awaits their arrival to welcome them back home and thank them for their tremendous service to our country.”

Clintandra Thompson is a web manager at the Atlantic Council and a Returned Peace Corps Volunteer who served in Senegal from 2012-2014.

Image: Hannah Dresang, shown here working with students on an environmental education lesson, had been working with the Peace Corps since September on conservation projects in Paraguay. (USA Today via REUTERS, March 2020)