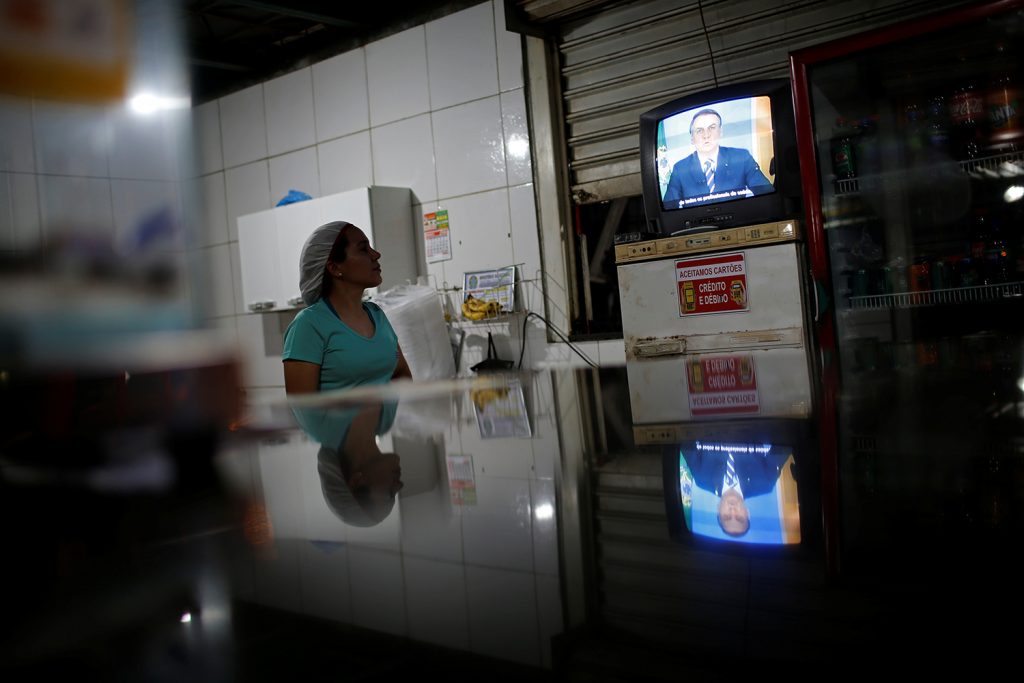 Since February, when the first case of COVID-19 was confirmed in Latin America, leaders have begun directing citizens on the best course of action to reduce the spread and loss of life. But whether to assuage fears or to assert their own political interests in a time of crisis, some heads of state have also been the culprits of spreading disinformation and misinformation. In Brazil and in Venezuela—two very different countries but both with oversaturated, highly polarized online information environments—thousands could end up paying for the spread of disinformation and misinformation with their lives.

At this moment of uncertainty and too many “expert voices,” societies are desperately seeking reliable, trustworthy sources of information. The COVID-19 pandemic is the first global health crisis in the age of social media—in countries where conversations on social media are hyperpolarized, governments must work even harder to create an atmosphere of confidence and reliability.

The number of COVID-19 cases in Latin America had surpassed 12,000 as March turned to April. As the situation worsens, it is imperative that governments be able to effectively implement national public health measures with which societies will comply. Yet the more governments send clouded, confusing, or outright inaccurate messages, the less likely it will be that their populations will heed mandates or warnings. In Brazil’s case, for example, the president himself is urging citizens to go back to work for the sake of the economy, contradicting health experts advocating for social distancing around the world and prompting the legal system to legally prohibit Jair Bolsonaro from amplifying directives against social isolation.

Two of the region’s most polarized countries, whose leaders espouse nearly opposite ideologies, provide stark glimpses into the very real effects of disinformation and offer a warning for how we should proceed.

In Brazil, President Jair Bolsonaro has failed outright to recognize the sheer potential of the virus—he has on various occasions called the coronavirus a “gripezinha,” (a small cold), as well as a fantasy amplified by the media. On March 29, he took to walking the streets of a market outside Brasilia, the capital, in an attempt to encourage Brazilians to keep the economy going rather than heed lockdown directives coming from health experts. Just days before, in a YouTube announcement streamed live on March 24, he affirmed that he will not sacrifice Brazil’s economy, and again referred to the virus as a small cold—going so far as to say it would not affect him as he is healthy and athletic, prompting enraged responses from scientists and some local government officials.

And, thanks in part to some encouragement from the president himself, mass gatherings like the pro-government protests that took place on March 15 brought together thousands of people at a time when social distancing was the recommended course of action by the World Health Organization. On the streets of São Paulo, some protestors called the virus a “hoax to discourage protesting.”

Confusing directions from the top, combined with the rising tide of disinformation spreading through Brazilian social media and messaging platforms, means millions of Brazilians are taking inappropriate, or outright ineffective, measures to contain the virus’s spread.

Brazilians, and most visibly the country’s most vulnerable populations, cannot afford to be put at risk by disinformation, misinformation, or the minimization of the seriousness of the virus. The first cases of coronavirus were confirmed on March 21 in the City of God favela. With low levels of access to health care services and high exposure to poor sanitary conditions, these are the populations that will suffer the most from this pandemic.

Nowhere is the information environment more conducive to the spread of disinformation than in Venezuela—the regime of Nicolas Maduro controls all of the major channels of communication, and independent media and civil society organizations struggle to make their voices heard within an environment replete with censorship, persecution, torture, and extrajudicial killings. Additionally, no epidemiological information has been publicly reported since Maduro took office in 2014, with one exception. In December 2016, then Minister of Health Antonieta Corporale published an epidemiological report, and the following day, the regime fired her.

In the middle of the COVID-19 crisis, on March 26, the US Department of Justice charged Nicolás Maduro and fourteen other former and current officials with drug trafficking, corruption, money laundering, and narco-terrorism. Hours later, Juan Guaidó, interim president of Venezuela recognized by more than fifty countries including the United States, called for the creation of a national emergency government to face the pandemic, excluding Maduro.

More than any other country in the region, the coronavirus pandemic could hit Venezuela at its very core. Just after Maduro ordered mandatory social quarantine in Venezuela, social media videos emerged from the streets of Petare, the country’s largest slum, showing hundreds heading to street markets to access basic goods. In a country where “59 percent of households have insufficient income to buy food” according to the Food Security Assessment published on February 2020, its unlikely that people could follow social distancing regulations.

The political stalemate in Venezuela and the US “maximum pressure” campaign is opening the door for the Maduro-controlled military to reinforce regulations exposing the population to larger violations of human rights, as well as political violence, persecution, and chaos.

As the online information environment in Venezuela continues to evolve, monitoring the digital engagement space with an approach to countering false narratives is increasingly necessary. #AlertaVenezuela, an Adrienne Arsht Latin America Center and Digital Forensic Research Lab effort, is paving the way for a deeper understanding of the complexities of the information environment in and around Venezuela. On March 27, we hosted a virtual discussion with key partners in Venezuela to look at the impact of COVID-19 disinformation in the country. By exposing and explaining disinformation in this context, the Atlantic Council has and will continue to shed light on the path ahead for combatting disinformation during this crisis.

A call to action

From the highest echelons of government to those sitting at home interacting with these developments from their phones or computers, there is a joint responsibility to stick to the facts, to verify everything, and to think twice before sharing.

Fact-checkers, media, and civil society have quickly mobilized to counter the rapid spread of disinformation. Technology companies launched control centers to help counter the spread of false news. And media outlets across the world opened bureaus focused on coronavirus reporting.

But, these efforts alone are not enough if leaders are contributing to the infodemic. Disinformation, misinformation, or misleading information coming from the top will not do the region any favors—at this time of uncertainty, the countries’ leaders must stick to the facts and avoid minimizing the dangers of this pandemic.

Roberta Braga is an associate director at the Adrienne Arsht Latin America Center of the Atlantic Council, where she focuses on Brazil and disinformation, and co-leads the organization’s #AlertaVenezuela work focused on countering disinformation in Venezuela with the Digital Forensic Research Lab.

Diego Area is an associate director at the Adrienne Arsht Latin America Center of the Atlantic Council, where he leads the Center’s work on Venezuela that covers themes including illicit activities, democracy and governance, crisis management, depolarization, and countering disinformation.

Image: A worker is seen in a snack bar while a television broadcasts Brazilian President Jair Bolsonaro's statement about the coronavirus disease (COVID-19) outbreak, at the Sao Sebastiao neighbourhood in Brasilia, Brazil, March 31, 2020. REUTERS/Adriano Machado