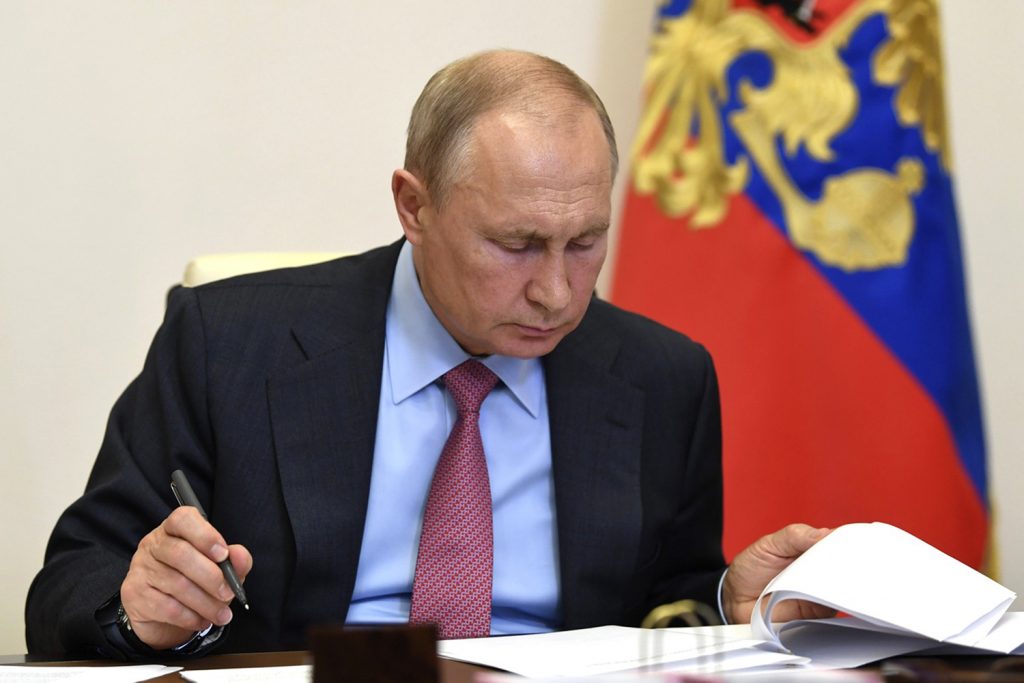 In an extraordinary article published under his name by The National Interest on June 18, Russian President Vladimir Putin made an impassioned effort to rebut Western criticism of Soviet behavior at the beginning of World War II, as well as to elucidate the sufferings and sacrifices of the Soviet people during the war. The article, titled “The Real Lessons of the 75th Anniversary of World War II,” appeared just ahead of Russia’s coronavirus-postponed commemoration of the end of the war in Europe. And it came as part of Putin’s multi-year campaign to justify what many regard as Moscow’s most notorious foreign-policy action ever: the signing of the Nazi-Soviet pact in 1939, which divided most of Eastern Europe into German and Soviet spheres of influence. Predictably, though, in purporting to set the record straight, Putin pins the blame for this agreement on the West and distorts the historical record.

In his article, the Russian leader seeks to absolve Soviet collaboration with Nazi Germany in 1939 by castigating the West for the infamous Munich agreement of September 1938, when the leaders of Britain and France acquiesced to Adolf Hitler’s demands that the relatively new state of Czechoslovakia cede the Sudetenland (which had a large ethnic German population) to Germany. According to Putin, “Britain, as well as France, which was at the time the main ally of the Czechs and Slovaks, chose to withdraw their guarantees and abandon this Eastern European country to its fate. In so doing, they sought to direct the attention of the Nazis eastward so that Germany and the Soviet Union would inevitably clash and bleed each other white.”

But as shameful as it was for the British and French leaders to consent to Hitler’s annexation of Czech territory, to claim that they did so in order to encourage conflict between Germany and the USSR is an exaggeration. For if this was their aim, then why did they later fall out with Hitler when he went beyond the terms of the Munich agreement and occupied the rest of the Czech territories in March 1939? More importantly, Britain and France offered to defend Poland and then declared war on Germany just after it invaded Poland in September 1939. Putin castigates the British and French for not undertaking much military action against Germany in 1939 and 1940. A truly Machiavellian Britain and France per Putin’s portrayal, however, would not have entered the war against Germany at all, but left Poland to its fate and hoped for a Nazi-Soviet clash occurring sooner than it did.

Putin also claims that the USSR attempted to build an “anti-Hitler coalition” in the late 1930s, but that this was rejected by Britain, France, and Poland. “The leading European powers,” Putin writes, “were unwilling to recognize the mortal danger posed by Germany and its allies to the whole world. They were hoping that they themselves would be left untouched by the war.” What Putin’s account neglects to point out is that the USSR, via the Communist International (or Comintern), had supported communist parties throughout the West that at various times during the interwar years had called for revolution against the Western governments that the Soviet Union subsequently proposed to ally with in the late 1930s. More loyal to the USSR than to France, the French Communist Party even supported the Nazi-Soviet pact and initially opposed the French war effort against Germany.

As shameful as British and French acquiescence to Hitler’s demands regarding the Sudetenland was, then, it is understandable why London and Paris might not have seen an alliance with Joseph Stalin at that time as desirable or even feasible. There would ultimately, of course, be a Soviet-Western alliance against Nazi Germany, but only after Hitler attacked the USSR in June 1941 and gave Moscow no choice but to agree to one.

In one of the most disturbing passages of Putin’s article, he writes, “In autumn 1939, the Soviet Union, pursuing its strategic military and defensive goals, started the process of the incorporation of Latvia, Lithuania, and Estonia. Their accession to the USSR was implemented on a contractual basis, with the consent of the elected authorities.” This repetition of Stalin-era Soviet propaganda is absolutely false. The Soviet annexation of the Baltics was accomplished by force and was a disgraceful action that Putin should be apologizing for and not defending. Putin’s continued insistence that the Baltics “voluntarily” joined the USSR has raised concerns in these and other former Soviet states that Russia might once again seek to annex them and claim that it was doing it “with the consent of the elected authorities.” Indeed, Putin justified his 2014 annexation of Crimea as reflecting the “will of the people” there.

At the end of the article, Putin credits the wartime conferences in Tehran, Yalta, San Francisco, and Potsdam for laying “the foundation of a world that for 75 years had no global war, despite the sharpest contradictions;” praises the “privilege and responsibility” of the veto power granted to the five permanent members of the United Nations Security Council; and calls for a summit meeting of the leaders of these permanent members (China, France, Russia, the United Kingdom, and the United States), which are all, he notes, nuclear powers. “Drawing on a shared historical memory, we can trust each other and must do so,” he stated.

This, however, is highly doubtful. Even if some of Putin’s criticisms of Western behavior are justified, his failure to acknowledge the USSR’s World War II-era misbehavior makes it impossible to trust him.

To stop Putin, the Western world must revisit the 1994 Budapest Memorandum

Ukraine’s Deputy PM for Reintegration of the Temporarily Occupied Territories Oleksii Reznikov says trust must be rebuilt before there can be peace with Russia. Returning to the framework of the Budapest Memorandum would be a step in the right direction, he argues.

Vladimir Putin has turned the Red Army role in WWII into a victory cult designed to rebuild post-Soviet Russia’s national pride and provide justification for Moscow’s aggressive foreign policy in Ukraine and beyond.

Image: President Vladimir Putin attends a videoconference on the coronavirus in Moscow, Russia on May 29, 2020, when he announced that the military parade for Victory Day over Nazi Germany in World War II would be celebrated on June 24 after being postponed due to the coronavirus pandemic via REUTERS