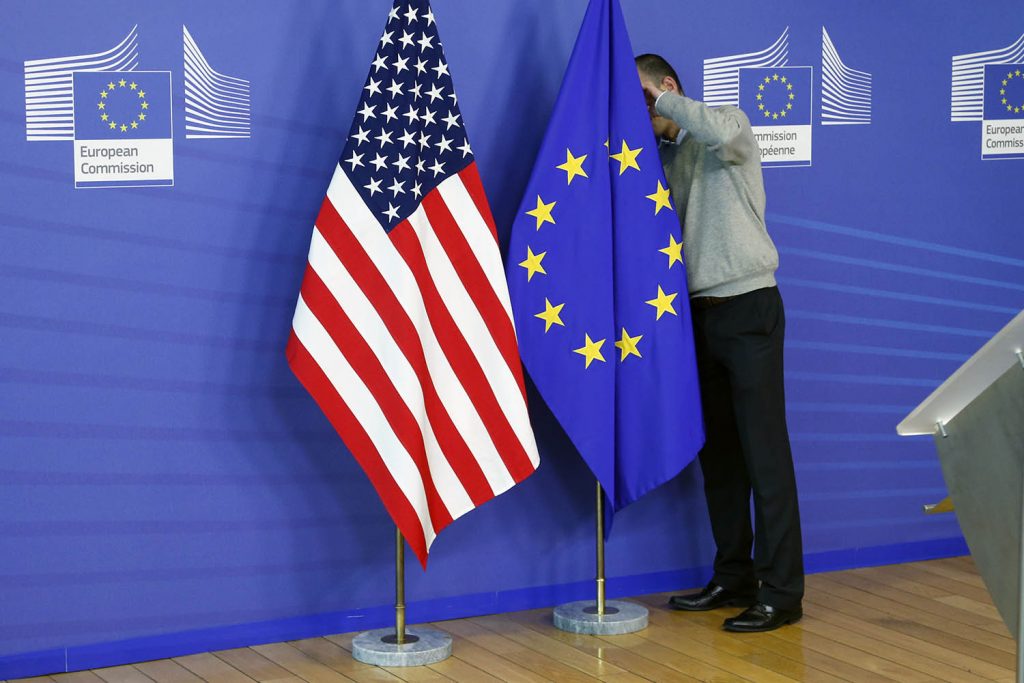 2020 had started well for transatlantic trade relations. When newly appointed European Commission President Ursula Von der Leyen and US President Donald J. Trump met for the first time in January in Davos, they vowed to make tangible progress on the US-EU trade agenda.

Yet nine months later, transatlantic trade relations seem to be more difficult than ever—“difficult” may even seem too soft a description. Pundits have called it an “escalating trade fight” or warned of a“truly ugly transatlantic trade war,” citing tariffs on EU exports of steel and aluminum, the repeated threats by President Trump of further tariffs, Brussels’ threat of retaliatory measures, the launch of an US investigation into European Digital Services Tax policies, as well as the endless Airbus-Boeing dispute at the World Trade Organization (WTO).

Given the extraordinary needs of a post-COVID-19 economic recovery and the continued threat of  global challenges, such as the rise of China, a new US-EU balanced partnership is more necessary now than ever. The US presidential election, whatever the result, can offer a window of opportunity to restart the discussion.

Europeans are ready to build something positive, but on a balanced basis

Despite having divergent views of US-EU relations, Europeans are united in their worries about the future of transatlantic trade. They are eager to start building something positive—but want to be considered as equals, not as a junior partner that can be bullied by the threat of tariffs.

The July 2018 Trump-Juncker joint statement, where the US president and the then-European Commission president committed to close friendship and strong trade relations, was a good start. The EU then showed its goodwill when the Council of the EU approved in April 2019 the reopening of negotiations with the United States on the elimination of tariffs for industrial goods and on conformity assessment.

August 2020 saw another positive development, when the EU and the United States announced their first negotiated reductions in duties in more than two decades, with the elimination of European tariffs on imports of US live and frozen lobster products in exchange of the reduction of US tariffs on a range of European products, including glassware and ceramics and disposable lighters.

However, the April 2019 EU Council mandate also set clear red lines: trade negotiations cannot be concluded as long as the May 2018 tariffs on EU exports of steel and aluminum remain in place. The European Parliament opposed the reopening of negotiations, asserting that the EU, unlike the United States, had already offered many concessions. Trade deals remain a difficult sell for the European public, as evidenced by the messy EU-Canada agreement (CETA) ratification, and the current US administration’s divisive approach does not help. As a result, EU Member States remain cautious and their individual priorities—such as France’s insistence on the inclusion of climate change measures—must be managed carefully.

What’s next? The need for a new trade relationship

A new transatlantic partnership will be necessary whatever the result of the US election. The clocks will not wind back to 2016, when the transatlantic trade agreement (TTIP) negotiations ended. Some of the tariffs, duties, and sanctions Trump imposed could survive even if he is not re-elected. More importantly, the EU-US trade relationship, the European and US approach to multilateralism, and the global balance of power have changed.

First, the US-EU partnership will be vital to the post-COVID 19 economic recovery. Transatlantic ties remain the artery of the world economy, with $1 trillion in two-way trade annually.

It is also critical to preserve the values and interests that link the EU and the United States. Both share common concerns, from securing supply chains to dealing with unfair Chinese trade practices. As Clément Beaune, France’s minister of State for European affairs, argues, “while not sharing the same style and method, Brussels had the same analysis as Washington when it came to China’s aggressive anti-competitive attitude.”

A balanced trade relationship is needed to find transatlantic answers to global threats. Trade politics is no longer exclusively about trade policy, but is often a proxy for security, technology, geopolitics, and more. Common US-EU answers to challenges such as cybersecurity, data privacy, 5G, artificial intelligence, and climate change can form the basis on which to shape a global trading system in which services, especially digital ones, increasingly supplement flows of manufactured goods. As Europe and the United States enter a strategic environment marked by great power politics, they cannot afford to be at odds on trade.

US-EU trade discussions have a long history, from the chlorinated chicken fights to the ambitions for a transatlantic agreement in the 1990s. The negotiation of the TTIP launched in 2013 was extremely ambitious, and in hindsight was maybe too ambitious in terms of method and scope. In 2016, after fifteen rounds of negotiations, it died without an agreement on a single chapter.

It is time to approach negotiations with new software. Whatever the framework, a step-by-step balanced process is essential. It would do well to start from current challenges. This could go down two different paths:

Restarting the transatlantic trade relationship also entails talking about the WTO. The global trading order is currently distorted, to the benefit of China, while the WTO’s rulebook does not reflect today’s realities. Only strong US-EU cooperation can restore fair global trade competition. This implies, as a first step, a frank transatlantic discussion on what created such a deadlock at the WTO.

There are only losers in a trade war. The US presidential election is an opportunity to launch a positive transatlantic dialogue to address current trade and geopolitical challenges through a pragmatic, step-by-step, and balanced approach.