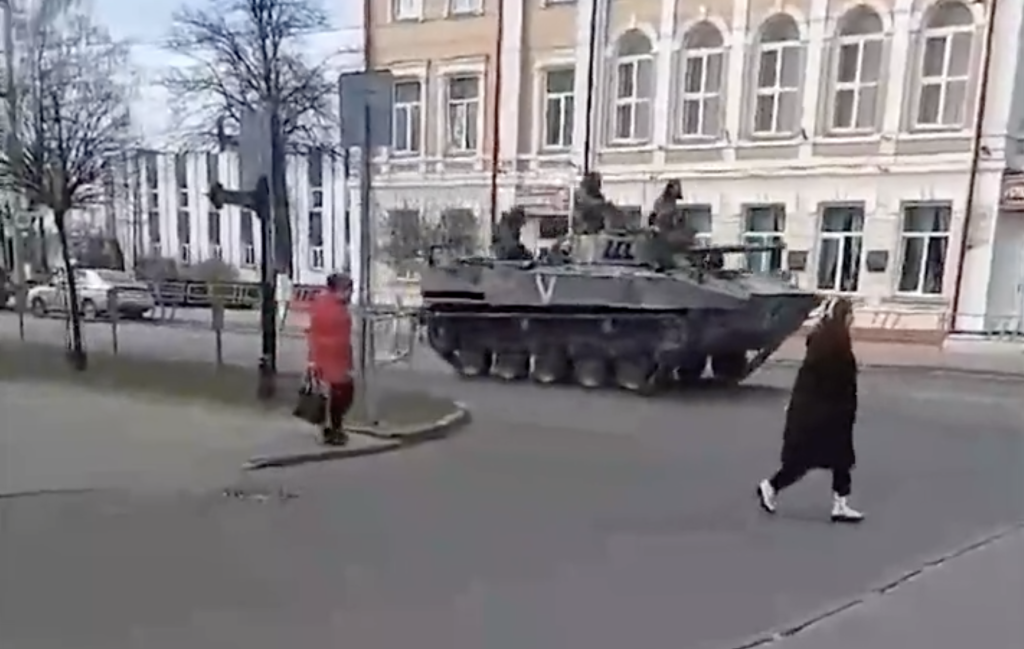 Questions swirl regarding explosions at Russian ammunition depot near Belgorod

On March 29, video evidence emerged suggesting that some Russian forces were returning to the territory of Belarus. A video showed Russian Airborne Forces (VDV) moving northward from the Belarusian border town of Rechitsa toward the city of Gomel, where they were loaded onto railway platforms. The second part of the video showed large Russian military formations, allegedly in Gomel, near railway tracks. While the exact location of the military vehicle formation is unknown, it was accompanied by a Belarusian police car, suggesting it was filmed in Belarus. Additional videos of alleged Russian withdrawal have surfaced over the past few days on social media, though they have yet to be confirmed.

In contrast, Twitter user @MarQs__ noted another video, originally posted by MotolkoHelp, appearing to show Russian vehicles going in the opposite direction, heading south to Rechitsa. “The convoy consists of mostly of trucks so either they will pick up soldiers in #Ukraine or they move in soldiers / supplies,” they wrote. MotolkoHelp later reported an additional video showing a column of Russian trucks heading toward Rechitsa.

Ukrainian presidential adviser Oleksiy Arestovych said that a withdrawal would demonstrate that Russia was unable to persuade Belarus to send its own troops into Ukraine. According to Arestovych, the probability of Belarus joining the war is currently low.

Multiple pro–Kremlin Telegram channels are spreading narratives that downplay or discredit the ongoing peace negotiations between Ukraine and Russia in Turkey. The Telegram channel Legitimniy (“Legitimate”) published a post stating that talks between Ukraine and Russia had ended and “there will be no results.” Seven minutes later, the channel published a rumor claiming that if the diplomatic negotiations did not bring any results, Russia would launch a massive attack in all directions.

As the Ukrainian delegation in Turkey outlined its proposals, pro-Kremlin Telegram channels tried to diminish them. The Legitimniy channel said that even though the bombardment of the Ukrainian cities continues, “the Ukrainian side started accelerating news of victory.” The channel claimed that Russia had established a police force within its occupied territories, concluding that it is not “profitable for Russia to make concessions now.” Finally, the channel argued against the peace negotiations by claiming that sanctions relief would not happen unless Russia admitted defeat and paid reparations to Ukrainian authorities.

Another Kremlin-linked Telegram channel, ZeRada, claimed that the Kremlin agreed to hold peace talks in Turkey to postpone Turkish ally Azerbaijan from launching an offensive against Armenia. The channel argued that Turkey would not support another conflict while the peace talks were happening. It also questioned Ukraine’s intentions to hold a referendum to finalize the country’s security status. The channel accused Ukraine of lying and questioned why Ukraine would suggest a referendum if it was winning the war.

Questions swirl regarding explosions at Russian ammunition depot near Belgorod

On March 29, videos surfaced of a blast at an ammunition storage facility near the Russian city of Belgorod. The videos show large explosions and detonating munitions in the town of Oktyabrsky, fourteen kilometers away from the Ukrainian border.

Rumors swirled on social media that the explosion resulted from a Ukrainian missile attack. However, Belgorod emergency services said the blast was caused by “a human factor,” suggesting human error.

Russian-owned news outlet TASS reported on its Telegram channel that four servicemen were injured after a projectile hit a military camp and that “according to preliminary information, the shelling happened from the Ukrainian side.” A pro-Kremlin Ukrainian Telegram channel repeated that narrative. Meanwhile, pro-Kremlin outlet RIA confirmed the injury of four servicemen, citing the “human factor” explanation.

While Russia has not provided any additional information about the explosion, spreading multiple explanations about an incident aligns with the Kremlin’s tactic to distract both its citizens and external observers by polluting the information space with numerous explanations that blur the line between truth and fiction.

On March 24, various reports emerged about the renewal of clashes between Azerbaijan and Armenian forces, which Armenia claims resulted in the death of three soldiers and fifteen wounded. Azerbaijani forces reportedly entered the village of Farrukh (Armenian name Parukh), which is currently under the control of Russian peacekeepers. The peacekeepers were deployed in Nagorno-Karabakh in November 2020, after a six-week war between Azerbaijan and Armenia ended with a peace deal brokered by Russia.

However, the Azerbaijani Ministry of Defense argued that Russia’s statement did not reflect reality, claiming that it had not changed positions near the village. Azerbaijan also denied violating the ceasefire and reminded Russia that the use of the term “Nagorno-Karabakh” was “disrespectful to the territorial integrity of the Republic of Azerbaijan,” and that it had disrespected the Declaration on Allied Interaction signed by the presidents of Russia and Azerbaijan on February 22, 2022.

In view of this, the latest reports about escalation between Azerbaijan and Armenia has been assessed by pro-Kremlin commentators as an attempt by Azerbaijan and Turkey to open a ”second front” against Russia in the South Caucasus. Tsargrad claimed that Azerbaijan, under Turkey’s influence, is trying to test Russia to see if it had enough military strength to engage in the region. It also reported that by opening a second front, Turkey and the United States want to significantly weaken Russia’s forces while it is focusing on “liberating Ukraine from neo-Nazis.” Pro-Kremlin outlet Reporter asserted that Azerbaijan is abetted by Turkey, and given that the latter is the largest supplier of drones to Ukraine, Russia should expect unfavorable moves from Turkey at any time.  Regnum wrote that Azerbaijan, Turkey, and the West are trying to create a second front for Russia in the South Caucasus, and that the Armenian government is also helping under the pressure from its “Western sponsors.” Rossiya 24 TV host Olga Skabeeva, meanwhile, also discussed the topic of a second front in the South Caucasus and asserted that Azerbaijan’s denial need to be clarified.

Millions of Russians are still using Facebook, Instagram, and Twitter, despite the social media platforms being blocked in the country. An analysis published by the pro-Kremlin online outlet RBC.ru analyzed social media usage over a period of nearly three weeks, including the ten days following Russia’s ban on Western social networks.

At the request of RBC, the research company Mediascope calculated the daily audience of the most popular social networks in Russia from February 24, the day when Russia invaded Ukraine, to March 15. According to the report, the number of daily users decreased following the ban, with a drop of approximately five million users on Instagram and four million on Facebook. Despite the decrease, Instagram had retained approximately 34.2 million daily users, while Facebook had retained around 5.5 million users. Twitter use dropped by more than 50 percent, from 2.6 million users to fewer than 1.3 million after the blockage. The research also showed an increase in the use of Russian social networks Vkontakte, Telegram, and Odnoklassniki. Telegram experienced the most dramatic jump, growing from 31.2 million users to 45.5 million users over the tracking period, a jump of more than 45 percent. TikTok remained relatively unchanged with more than 33 million daily users.

RBC concluded that the proliferation of virtual private networks (VPNs) in the country explained the continued activity of Russian users on Western social media platforms, as VPNs allow users to route their internet connections anonymously through other countries. The DFRLab has previously reported on the increased demand for VPNs in Russia.

On March 29, Vladimir Shamanov, Deputy Chairman of the Duma Committee for the Development of Civil Society, claimed that Russian special forces had captured the Ukrainian soldiers accused of shooting Russian prisoners of war in the legs. Shamanov said the captured Ukrainians were Sergey “Chili” Velichko and Konstantin Nemichev, who are battalion commanders of the Kharkiv branch of the Azov territorial defense.

Later that same day, Velichko and Nemichev released a video to prove they were not being held captive. In the video, Nemichev stated without evidence that the footage showing the Russian soldiers being shot was “propaganda” and that all Russian prisoners of war are being treated “humanely.”

The DFRLab could not confirm whether Velichko or Nemichev are in the graphic five-minute video, that appears to show Russian POWs being taunted and shot in the legs at close range.

Additionally, Vladimir Medinsky, the head of the Russian delegation attending peace talks in Turkey, said that Russia raised the video with the Ukrainian delegation. Ukraine “promised to take the hardest measures if they find them first – those who did these war crimes,” he said.

Previously, Oleksiy Arestovich, an adviser to the Ukrainian President’s Office, wrote on Telegram that the video was being verified.