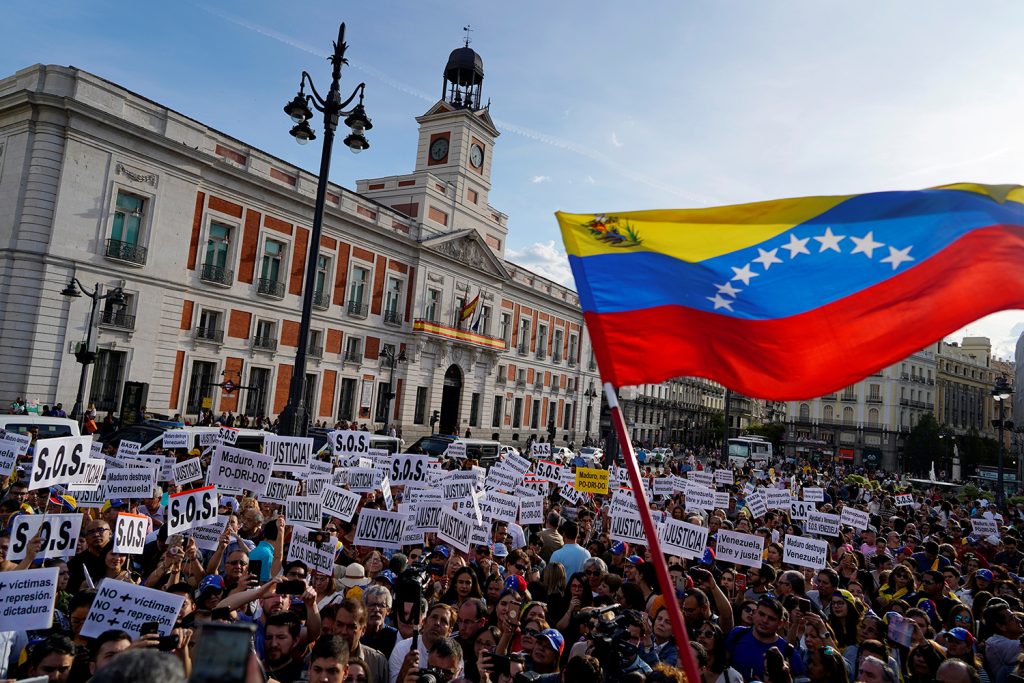 Late last month, the Spanish government broke diplomatic protocol with many of its European partners and its own historical precedent by announcing Prime Minister Pedro Sánchez would not meet with Venezuelan interim president Juan Guaidó. Instead, Guaidó was granted a meeting with Foreign Minister Arancha González Laya, despite Spain being among the almost sixty countries that recognize Guaidó as the constitutional and legitimate president of Venezuela.

Guaidó arrived in Madrid on January 25 as part of an effort to reinforce international support for the Venezuelan interim government. Just days before, Guaidó met with his British, French, Greek, Dutch, Austrian, and German counterparts, and addressed audiences at the European Parliament in Brussels and the World Economic Forum in Davos.

The decision was seen as indicative of the influence of far-left actors in Spain’s coalition government consisting of the Socialist Party (PSOE) and left-wing Podemos. The coalition was formed after two inconclusive elections and nine months of political deadlock. Although PSOE won both elections, it failed to obtain a majority in the 350-seat parliament. After the November elections, PSOE and Podemos reached an agreement to form a progressive coalition government, with Sánchez narrowly securing parliamentary approval on January 7 for a joint administration.

Spanish opposition parties requested EU High Representative Josep Borrell—who previously served as Spain’s minister of foreign affairs—to take action against the Spanish government. Moreover, US Special Representative for Venezuela, Elliott Abrams, commented that the visit seemed like a violation of EU sanctions and that the United States is in communication with the Spanish government regarding the matter. Relatedly, on February 7, the US Department of the Treasury’s Office of Foreign Assets Control (OFAC) announced sanctions on Venezuelan state-owned carrier Consorcio Venezolano de Industrias Aeronáuticas y Servicios Aéreos  (CONVIASA) and its aircraft, with US Treasury Secretary Steven Mnuchin adding that the Maduro regime relies on the airline “to shuttle corrupt regime officials around the world to fuel support for its anti-democratic efforts.”

While Sánchez has publicly condemned Maduro, Podemos has proven financial ties to the regime—last December, a judge ruled party founder  Pablo Iglesias received $272,325 in 2016 from the Maduro regime, deposited in an account at the Euro Pacific bank of the tax haven of the Grenadine Islands.  Moreover, Iglesias, now serving as second deputy minister and as minister of social rights and 2030 agenda, does not recognize Guaidó as interim president of Venezuela or as president of the National Assembly, arguing on January 23 that Guaidó had “lost” the January 5 National Assembly elections.

In fact, on January 5, the day National Assembly elections were to take place in Venezuela, Maduro’s forces blocked Guaidó and opposition lawmakers from entering the National Assembly building, where Luis Parra, loyal to Maduro’s regime, declared himself speaker of the assembly in a session that did not have legal quorum nor vote count. Hours later, an emergency session was held at the headquarters of El Nacional newspaper, where 100 of the 167 representatives voted to re-elect Guaidó as president of the National Assembly.

The regime’s actions were condemned by democratic forces in Venezuela and internationally. The United States immediately denounced the coup attempt and the Lima Group echoed the statement. The International Contact Group (ICG)—of which eight European Union states are member, including Spain—described the election of Parra as illegitimate and reiterated its support for Guaidó. Also on January 5, EU foreign affairs spokesperson Peter Stano reaffirmed the body’s recognition of Guaidó as the legitimate president of the National Assembly. Even the governments of Argentina and Mexico, which have notably taken more moderate positions on the regime, denounced the violence in Caracas.

By stating that Guaidó “lost” the January 5 elections, Iglesias contradicted official EU and ICG statements, turned a blind eye to the regime’s use of authoritarian force to seize control of the last independent institution in the country, and implicitly lent credence to Nicolás Maduro.

Support shown to the Maduro regime on ideological grounds serves to fuel further polarization, not only in Venezuela, but around the world.

Narratives of left vs. right, as well as disinformation (false information spread with intent to deceive) pushed by the regime and its allies on social media have further divided Venezuelan society, enabled Maduro to undermine the constitution, and helped convince people inside and outside Venezuela that Guaidó and Maduro are political rivals.

Whatever the nature of the relationship between the Maduro regime and Podemos, or ideological commonalities between the two, lending diplomatic support for Maduro is commending a dictatorship.

This dictatorship systemically persecutes and murders members of the opposition, relying on its Special Action Forces (FAES) and overall penchant for impunity. The horrific living situation in Venezuela forces five thousand people to leave the country daily, with estimated numbers of emigrants close to 5 million.

Spain must not only abide by European Union law and protocol when it comes to Venezuela—it must lead the bloc’s efforts in putting an end to the dictatorship that is destroying its former colony.

The airport encounter between Rodriguez and Ábalos was criticized in Spain as well as internationally and raises serious questions on how EU members interpret and apply sanctions on airport areas prior to passport controls. According to Article 6 of Council Decision (CFSP) 2017/2074, “Member States shall take the necessary measures to prevent the entry into, or transit through, their territories” of sanctioned individuals. During a press briefing in Berlin, Borrell commented that, according to EU law, it is up to each country to ensure the implementation of sanctions. Since EU sanctions in airport areas seem open to interpretation, the bloc must consider sanctioning Venezuelan airlines altogether to avoid future mishaps, or in the least of cases, amending Article 6 to specify it applies to airport areas.

On January 31, 2020, Vanessa Neumann, ambassador for Venezuela to the Court of St. James’s in the United Kingdom, announced the formation of a joint financial intelligence commission between the interim government of Venezuela and British authorities to combat illicit financial networks in Venezuela. Given recent money laundering and corruption schemes in Spain involving Venezuelans both in and connected to the regime, the Spanish government must consider establishing a Venezuelan financial intelligence unit to promote financial transparency, anti-corruption, and counterterrorism financing laws.

In 2019, Europe was the third-largest destination for Venezuelan oil, with Spain’s Repsol receiving an average of 118,980 barrels per day (bpd). Although Repsol has gradually reduced its activities in Venezuela, it continues to import Venezuelan crude in exchange for refined products or commercial debts, allowing Venezuela to curve US sanctions. With OFAC today announcing sanctions on a subsidiary of Russia’s Rosneft over Venezuelan exports, Spain should consider carefully reviewing and further reducing its activities in Venezuela to avoid infringing US law.

Venezuela’s Orinoco Mining Arc is an area of over one hundred thousand square kilometers south of the Orinoco River set aside in 2016 by Nicolás Maduro as a “strategic development zone” for extracting gold and forty other minerals. Gold trafficking in the Orinoco Arc props up the Maduro regime and is tied to money laundering, drug trafficking, and terrorism. Spain must lead the EU’s efforts in passing legislation requiring auditing systems for mineral supply chains and companies to report minerals purchases, as it is suspected that gold from Venezuela is traded through Switzerland and Belgium to markets around the world.