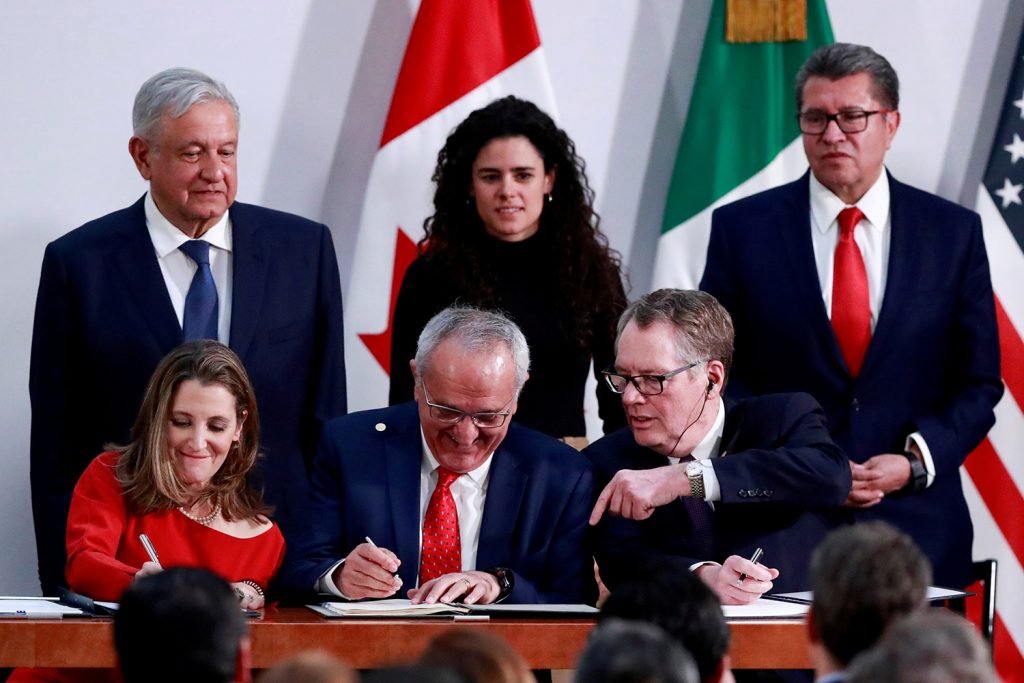 The deal, which was agreed to by then Mexican President Enrique Peña Nieto, Canadian Prime Minister Justin Trudeau, and US President Donald J. Trump in November 2018, was updated in December 2019 to strengthen labor, environmental standards, and enforcement provisions, to address concerns from US congressional Democrats. The USMCA also includes sections on automobiles, agriculture, data flows, intellectual property, energy, and pharmaceuticals.

The beginning of the new agreement coincides with a growingly uncertain economic outlook for North America, as the COVID-19 pandemic has sent economic shockwaves around the world. What will the new phase of North American trade look like and how will the USMCA help guide recoveries from the COVID-19 crisis? Our Atlantic Council experts weigh in on what the new USMCA era may bring:

Jump to an expert response:

Secretary Ildefonso Guajardo: The only light at the end of the tunnel.

Damon Wilson: A powerhouse together.

Maria Fernanda Perez Arguello: An occasion for optimism for the whole neighborhood.

The only light at the end of the tunnel.

“The USMCA is the only light at the end of the tunnel, because unfortunately, we never thought we would find ourselves in this crossroad: starting the new agreement during the worst moment of a crisis. We are predicting to lose around 10 million jobs in Mexico and the people below the level of poverty is expected to rise by 10 million—this figure will take us at least a decade back in terms of social development. The agreement will give us at least a new set of rules that will guarantee the continuation of North American integration.”

“Together, Canada, Mexico and the United States make North America an energy, manufacturing, and innovation powerhouse. The USMCA helps unlock this potential, offering greater prosperity for these nations’ citizens and positioning democracies in North America to better shape global standards and compete with China.”

“The US-Mexico-Canada Agreement will bring much needed certainty for the millions of US workers who depend on trade with Mexico and Canada for their jobs. It’s a result of bipartisan compromise with important new provisions for labor rights, rules of origin, and updates to make this an agreement for a new economy. But implementation will not be easy especially in the midst of a pandemic. Businesses of all sizes will have to readjust to new provisions, the new rapid response labor mechanism will quickly be tested, and questions on the exact formula for calculating USMCA rules of origin compliance will be top of mind for the many businesses who depend on the inter-connected supply chains. Getting implementation right is critical as we work to build out of economic contraction.”

“USMCA launch day comes at an auspicious time for energy markets. Following a precarious several months due to the impact of COVID-19 on energy demand and oil and gas prices, USMCA should provide some optimism by solidifying one of the largest integrated energy relationships in the world and not doing much to upset the energy status-quo set by its predecessor, NAFTA. Introducing an additional level of certainty for energy investment by protecting dispute mechanisms and providing a framework to support liberalization, particularly at a moment when markets are looking at pathways for post-COVID recovery, further strengthens the value of USMCA as Mexico City, Washington, and Ottawa move to implementation.”

“USMCA implementation arrives at an opportune moment, during a dreadful year for global trade and the global economy. The treaty establishes concrete commitments and next-generation standards regarding strategically significant 21st century trade policy priorities such as intellectual property, labor rights, supply chain management, data transfers, and pharmaceuticals production amid ongoing—and increasingly difficult—global WTO reform negotiations. The increased prominence provided to pharmaceuticals and medical supply production issues this year during the pandemic underscores the strategic importance of more diversified supply chain relationships. The USMCA will help accelerate supply chain diversification as it goes into force today. The treaty seems also likely to provide a foundation for economic security and diversification in Mexico and Canada amid a global shift away from carbon-based energy that will take a toll on their economies in the near term. Many additionally hope that the energy, pharmaceutical, and labor market provisions together with tough new enforcement mechanisms will create concrete incentives for sectoral reform in the North American region.

“The multi-decade shift towards regional (rather than global) trade agreements has been accelerated by the regrettable and troubling rise of economic nationalism in the United States and other countries around the world. Part of that rise relates to perceptions that the benefits of global economic interoperability deliver asymmetric benefits. Part of the backlash against global trade also relates to perceptions that classic trade agreements do not adequately address modern regulatory and policy priorities associated with the increasingly digital knowledge economy. The USMCA, for all its faults, establishes high standards that can help forward-looking trade negotiators in Geneva and the Ottawa Group advance free trade priorities regarding intellectual property and data transfers at the global table alongside advanced labor and other regulatory standards.

“Finally, the USMCA goes into force just in time to provide a deeper foundation for potential cross-border economic cooperation as European, Japanese, and North American leaders sharpen their efforts to challenge China’s alternative vision for how the global trade and economic relationships should function.”

An occasion for optimism for the whole neighborhood.

“The world over, but especially in Central America, nations outside of USMCA are preparing for the debut of the hemisphere’s remodeled economic engine. Pre-pandemic baselines and projections for growth and job creation are shattered, but no matter how slowed and stormy the years ahead are, the centrality of North America to the trade flows and the economic opportunity of the whole neighborhood remains. Compounded by the trending regionalization of supply chains, USMCA entry into force is an occasion for optimism south of the (Mexican) border.”

“The implementation of the USMCA takes place in the middle of a rethinking about global supply chains following disruptions caused by the COVID-19 pandemic as well as escalating political and trade tensions between the United States and China. Companies worldwide have begun to find ways to improve the resilience of their operations, including by streamlining and shortening their supply chains. In addition, there has been an effort to bring production closer to their customers in big markets. These factors have given rise to a regionalization of production, correcting to some extent the earlier globalization. The USMCA, in particular its higher local (regional) content requirements for auto parts, will reinforce the regionalization tendencies—basically diverting some trade and foreign direct investment from outsiders to benefit the three North American members. For example, while US imports from China declined by 16 percent (or by $87 billion) in 2019 compared to 2018, US imports from Mexico increased by 3.5% ($11.6 billion). Many companies, including from China, have announced plans to invest in Mexico. As a comparison, US imports from Vietnam rose by 35 percent ($17.5 billion) in 2019—both Mexico and Vietnam have been mentioned as “winners” among emerging markets countries in the US-China trade war.”

Despite USMCA, North America may see more confrontation on energy.

“While the arrival of USMCA on July 1 will have many benefits for the North American economies generally, for in the energy sector, confrontation rather than cooperation is more likely unless steps are taken to preemptively resolve escalating disputes. On the positive side, after years of uncertainty on whether “new NAFTA” or “no NAFTA” would prevail against the back drop of heighten political tensions, USMCA coming into force on July 1 reaffirms the legal foundation upon which millions of jobs rely and decades of intricate supply chains have been built. USMCA can also be a needed booster shot for three economies ailing under coronavirus. Global dislocations in trade and enhanced imperatives for resilient supply chains create significant new opportunities for North America’s integrated supply chains to outcompete global rivals.

“Energy cooperation can be a significant competitive advantage for each of the USMCA economies. North America’s abundant, low-cost natural resources, backed by efficient capital markets and developed infrastructure, can affordably power economic recovery. The global energy system is in transition to be more diverse, efficient, and cleaner. North America is well-positioned to be the global leader in innovation, manufacture, and deployment of new energy technologies to define that transition. USMCA lays the legal basis for further commercial integration on energy, and maximizing benefit of that foundation requires enhanced policy and regulatory dialogue, including to bridge the gap on areas such as national climate policies and infrastructure permitting.

“For energy, however, the dawn of the USMCA era threatens to be mired in confrontation rather than cooperation.  The crux of concern is Mexico’s slide away from fair treatment of US and Canadian energy exports and companies investing in Mexico. For example, companies report having import permits slow-rolled, thus limiting access for natural gas and refined oil product exports at a time of severe distress in the industry. Renewable power advocates are concerned by recently introduced rules that would give preferential treatment to state-owned CFE over cheaper renewable power, thus locking Mexico into use of expensive and polluting fuel oil.  Those are just two examples of how President López Obrador’s more nationalist energy agenda threatens to cross a line from Mexico asserting legitimate sovereign policy-making into the realm of prohibited violations of USMCA fair treatment rules. With leaders scheduled to meet next week, there is still room for these budding issues to be put to rest and confrontation to be avoided.”

Upgrading NAFTA was a long time coming, but things are different than they were in 1994 because Canada and Mexico have bilateral trade agreements with the European Union, and the United States doesn’t. The United States needs TTIP to make the most of USMCA.