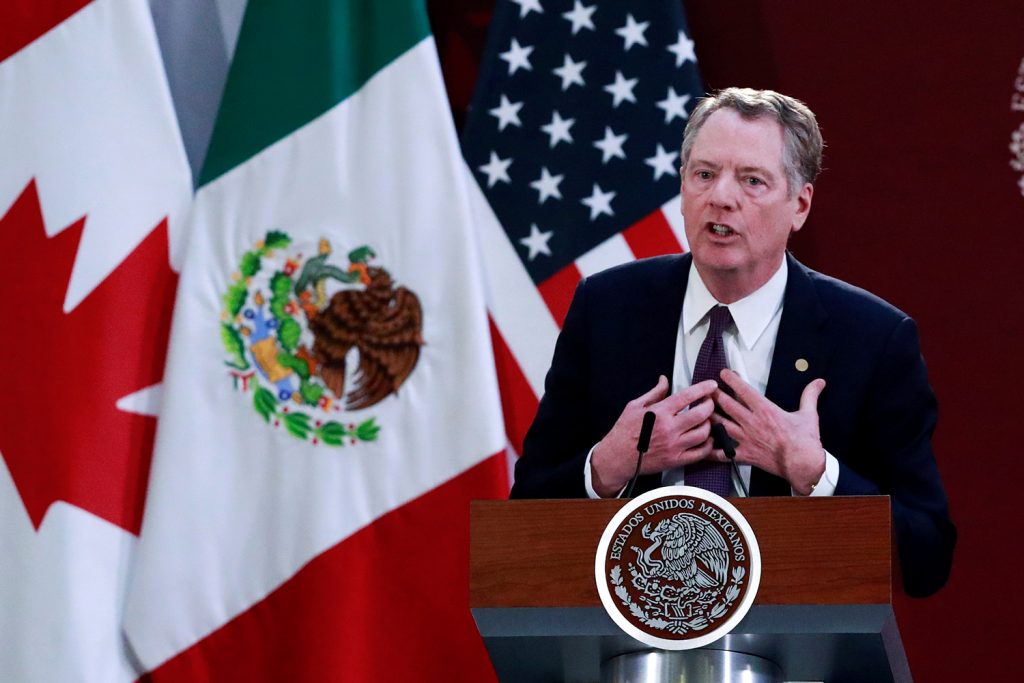 U.S. Trade Representative Robert Lighthizer gestures as he speaks during a meeting at the Presidential Palace, in Mexico City, Mexico December 10, 2019. REUTERS/Henry Romero

The rumor is that the United States-Mexico-Canada Agreement (USMCA) will enter into force in the United States on July 1. The occasion will be met with a sigh of relief, giving its predecessor, the North American Free Trade Agreement (NAFTA), a new lease on life.

But the work is just starting. That’s because the success of the USMCA will require that the United States sign yet another agreement: The Transatlantic Trade and Investment Partnership (TTIP).

This is the untold story of USMCA. Upgrading NAFTA was a long time coming, but things are different than they were in 1994 because Canada and Mexico have bilateral trade agreements with the European Union, and the United States doesn’t. The United States needs TTIP to make the most of USMCA.

This reality has been hiding in plain sight for years. The Canada-European Union Comprehensive Economic and Trade Agreement (CETA) went into force in 2017, cutting 99 percent of tariffs. One year later, the EU and Mexico upgraded their 1997 Global Agreement with a deal on goods, services, and government procurement, among other issues. This leaves the United States as the missing link. Why does it matter?

Imagine a US company that manufacturers widgets. USMCA ensures this company zero tariffs in Canada and Mexico. But if the company were to move to Canada or Mexico, it would also enjoy zero tariff market access to the EU under CETA or EU-Mexico, while still being able to ship back to the United States at zero tariff under USMCA. This is called an “inversion.”

The answer is TTIP. Think of TTIP as completing a transatlantic free trade area. Without it, you get USMCA-inspired inversions from the United States.

The risk of this incomplete triangle has been staring Washington in the face for years. The first round of TTIP negotiations took place in 2013 and ran through 2015, only to fall victim to the politics of 2016. The shame in this, quite apart from fears of inversions, is that the agreement was shaping up to be the best the United States has ever negotiated. Indeed, given the nature of US-EU trade, the deal myopically set its sights on correcting the most vexing market access problems.

EU politics didn’t help things. The realization that TTIP would allow US firms to compete on par in Europe, and even have a greater voice in regulatory politics across member states, did much to undermine Brussels’ negotiating authority, which has since lapsed.

Is there a way forward? Skeptics will insist that there is no political appetite for TTIP on either side of the Atlantic. Perhaps. But the reality is that not signing TTIP will be more costly for both sides, both commercially and politically. After all, EU firms have the same incentive to relocate to Canada or Mexico as US firms.

A new narrative will be needed, one that moves away from concerns about competing against low-wage labor and instead focuses on state-of-the-art concerns, like services and intellectual property.

The text of CETA can help in this regard. It contains provisions that will appeal to trade skeptics worried about labor and the environment, and win over trade proponents looking for modern obligations that go well beyond those of the World Trade Organization.

Is this the time to talk honestly about USMCA’s need for TTIP? The easy answer is no, first and foremost because the United States is gearing up for elections in November. That said, the coronavirus pandemic is raising axiomatic questions about how to reopen the economy, in addition to concerns about the proliferation of export restrictions.

USMCA brings predictability and stability to the supply chains that crisscross North America. Yet given CETA and EU-Mexico, the fact is that USMCA will fall short without TTIP. US politics is no more immune to international pressures than US commerce. The case for TTIP reflects the confluence of both.

Marc L. Busch is the Karl F. Landegger professor of international business diplomacy at the Edmund A. Walsh School of Foreign Service at Georgetown University and a nonresident senior fellow in the Atlantic Council Scowcroft Center for Strategy and Security’s Transatlantic Security Initiative.

Transatlantic policymakers must urgently find new ways to address this deepening crisis at the core of the interdependent economy that delivers economic growth and jobs. This requires finding ways right now to reactivate supply chains and increase confidence in supply chain control processes throughout this crisis.

Transatlantic policymakers should not waste this opportunity to redefine the transatlantic relationship. Leaders looking for traction should learn from the recent past and chart a different trajectory this year. In particular, they should acknowledge that different interests exist, focus on economic areas where interests align well, and pragmatically maximize efforts to align commitments.