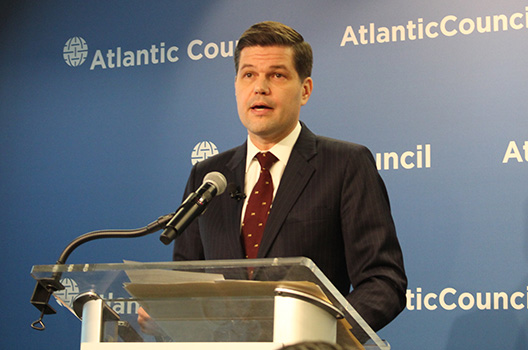 ‘The return of great nation competition is the defining geopolitical fact of our time,’ says US Assistant Secretary of State Wess Mitchell

The United States’ rivals are “expanding their political, military, and commercial influence” in Central and Eastern Europe to the detriment of the Western alliance, A. Wess Mitchell, assistant secretary responsible for the US State Department’s Bureau of European and Eurasian Affairs, said at the Atlantic Council in Washington on October 18.

“The return of great nation competition is the defining geopolitical fact of our time,” Mitchell said, adding the warning that “for far too long the West did not take competition seriously” in Central and Eastern Europe. Content with the success of the post-Cold War period, officials in Europe and the United States have allowed growing Russian and Chinese influence in the region to “sneak up on us,” he contended.

Mitchell, who spoke at the Atlantic Council’s “Championing the Frontlines of Freedom: Erasing the ‘Grey Zone’” conference, explained that “Russia uses manipulative energy tactics, corruption, and propaganda to weaken Western nations from within and undermine their bonds with the United States,” while “Beijing uses debt-book diplomacy to accumulate infrastructure and force concessions on smaller nations.”

Mitchell’s raising of Chinese influence in the region, alongside the more overt Russian presence, reflects a growing Trump administration focus on Beijing’s international influence activities. On October 4, US Vice President Mike Pence described a litany of aggressive Chinese actions in a speech, including growing Chinese commercial presence in Europe. Mitchell highlighted this point, explaining that Chinese investments in Europe totaled $318 billion in 2017 and that now Beijing “owns or controls almost a tenth of Europe’s entire port capacity.”

The United States and its allies cannot stand still in the face of this growing threat to Central and Eastern Europe, Mitchell argued. “We must not see it as a foregone conclusion that countries will automatically remain friendly to America,” he said. “We must apply ourselves to the task of preventing their domination by American competitors.”

Unlike Washington, “China and Russia are engaged in a diplomatic full-court press in sensitive regions around the world. The United States must show up or expect to lose,” Mitchell contended.

Washington must do more, Mitchell maintained, but it must also “expect those whom America helps to not abet our rivals.”

Talking directly to many American NATO allies, Mitchell stated: “Western Europeans cannot continue to deepen energy dependence on the same Russia that America defends it against. Or enrich themselves from the same Iran that is building ballistic missiles that threaten Europe.”

When asked by Atlantic Council Executive Vice President Damon Wilson, who moderated the session, about growing tensions between members of the transatlantic alliance, Mitchell conceded that disagreements between the United States and its allies on topics such as the Nord Stream 2 pipeline, the Iranian nuclear deal, and NATO spending may ruffle some feathers. But, Mitchell argued, it was better to “have those disagreements now… and get to a better outcome, precisely so we can take strategic competition [from Russia and China] seriously.” He noted the successful release of American pastor Andrew Brunson in Turkey, and hoped it would lead to further progress on convincing Ankara to abandon its purchase of S400 missiles from Russia. Despite the tensions with Ankara, Mitchell hoped that US diplomacy could “keep Turkey not only on a trajectory toward the political West, but also the strategic West.”

He also criticized “many of America’s closest allies in Central Europe” who “operate networks of corruption and state-owned enterprises that rig the system in favor of China and Russia. This creates an uneven playing field for US companies.” He added, “it is not acceptable for US allies in central Europe to support projects like Turkstream 2 and maintain cozy energy deals that make the region more vulnerable to the very Russia that these states joined NATO to protect themselves against.”

Mitchell maintained that the United States will always “prioritize support, resources, and aid for those who are our friends,” but that Washington now calls “on our allies to follow our lead and strengthen their laws to better screen foreign investments in their countries for national security threats.”

China and Russia have been able to move into Central and Eastern Europe in part due to the West overlooking “the foundational importance of the nation-state and national sovereignty,” he said.

Echoing remarks made by US President Donald J. Trump at the United Nations on September 25, Mitchell said the “West must reclaim the tradition of supporting the nation state as its own and work harder to ensure that international institutions reflect the democratic will of nations or expect institutions to lose influence and relevance.”

Disputes between governments in Central and Eastern Europe and the European Union, such as ongoing controversies between Brussels and member states Poland and Hungary, have allowed Russia and China to paint themselves as “sincere champions of true national independence,” a development that should be “unthinkable,” according to Mitchell. He maintained that Western nations must continue to engage – rather than isolate – governments in Central and Eastern Europe who may be pursuing policies Washington and Brussels disagree with. “We must be willing to use diplomacy to aggressively advance the national interest,” he said. “Not only by engaging with countries with whom we agree, but by engaging with countries with whom we have serious differences. Differences that can be exploited by rivals to increase their own influence.”

“Our allies in Central Europe must not be under any illusions that these powers are their friends,” Mitchell said, adding, “the idea that Vladimir Putin is truly a friend of the national independence of a small state is insane.”

The championing of national independence and sovereignty is exactly what differentiates the West from the authoritarian regimes, Mitchell argued. “Today it is the national sovereignty and territorial integrity of frontier states like Ukraine, Georgia, and even Belarus, that offer the surest bulwark against Russian neo-imperialism,” he said. The United States should be seen as the protector of sovereignty as it “reject[s] Russia’s territorial aggression against its neighbor Ukraine and [rejects] China’s predatory ‘debt-mongering’ throughout Central and Eastern Europe.”

“Unlike our rivals,” Mitchell continued, “America does not seek dependencies. We seek strong allies and partners that are free, independent, and confident states willing and able to share the burden of Western defense.” It is the maintenance of strong, independent allies, rather than weak dependents, that will allow the West to “once again prevail,” he argued.

Although he emphasized that European nations need to focus on “reclaiming sovereignty,” Mitchell maintained that “the EU is a very close partner of the United States” and “the future of the integration project is a decision only the Europeans can make.” But, he added, the United States has long had a tradition of not interfering in the details of European integration and now would “not get deeply involved in disputes between the EU and its member states.”

Despite the increasing threats, Mitchell was confident that the United States and its allies could beat back its competitors in Europe. “One of America’s greatest competitive advantages against its authoritarian rivals is our story. Our legacy as a democratic, generous, and entrepreneurial people,” he said. This legacy, combined with a “shared history of fighting tyranny” with the people of Central and Eastern Europe, Michell argued, can ensure that the United States and the West can secure the frontlines of freedom.

Full video of the Atlantic Council’s conference, Championing the Frontlines of Freedom: Erasing the ‘Grey Zone.’ can be found here. A transcript of Assistant Secretary Mitchell’s keynote remarks can be found here.

Image: US Assistant Secretary for European and Eurasian Affairs, A. Wess Mitchell, speaks at the Atlantic Council on October 18, 2018.