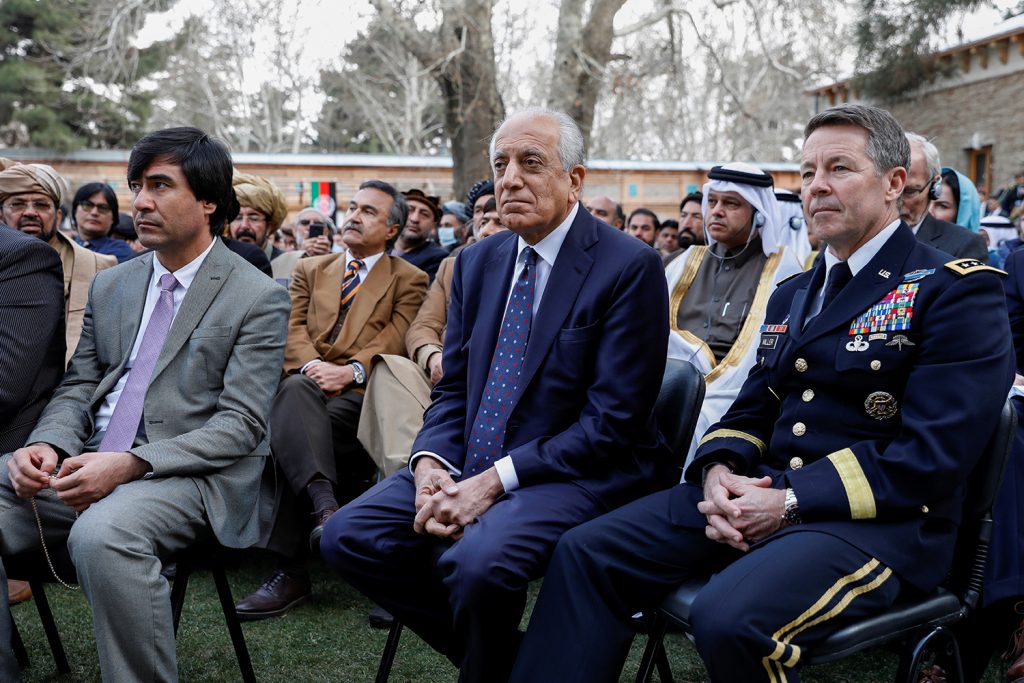 On March 1, the United States and the Taliban signed a peace deal following months of tense, highly publicized bilateral peace talks. The finalized agreement had four key points: 1) a staggered withdrawal of foreign troops over fourteen months; 2) assurances by the Taliban that Afghanistan will not be used as a base to launch terror attacks against the United States nor provide haven to other extremist groups such as al-Qaeda and the Islamic State; 3) the beginning of an Intra-Afghan Dialogue during the second week of March that includes the government in Kabul; and 4) a cessation of violence. The deal aims to wind down nearly twenty years of war in Afghanistan, following the Taliban’s rise to power in the 1990s and the terrorist attacks of September 11, 2001 in the United States.

The negotiations excluded the Afghan government, though elements of the peace deal—the bilateral prisoner swap in particular—required Kabul’s action. Afghan President Ashraf Ghani initially rejected the United States and the Taliban’s agreement to swap prisoners, stating that “it is not in the authority of the United States to decide, they are only a facilitator.” Although the Afghan government eventually approved the release of 1,500 Taliban prisoners (of the five thousand required by the deal), President Ghani’s initial rejection of this clause and the overall resumption of violence raise worries that the peace deal may indeed be short-lived. It remains unclear whether the agreement truly sought to guide Afghanistan towards a democratic and peaceful future, or simply to give US President Donald J. Trump’s administration a politically palatable exit from the United States’ longest armed conflict. If the peace agreement is to be salvaged and Afghanistan finally redirected away from the spiraling chasm of endless war, then all parties must answer the following questions.

The Taliban’s long-standing refusal to recognize Kabul as the legitimate government of Afghanistan does not bode well for successful implementation of a substantively meaningful Intra-Afghan Dialogue. Additionally, the Taliban’s fragmentation weakens the credibility of any promises the organization makes in a peace deal, as its political leadership may lack the coercive ability to enforce a ceasefire among its splinter and peripheral groups. Kabul will also not wish to negotiate under threat by the Taliban, though the group has already resumed attacks against the government. Should the two come to a political settlement, will the Taliban become a political entity with seats in the legislature and a power-sharing quota within bureaucratic/unelected segments of the state? Or will they be given an autonomous region of Afghanistan to rule with a separate set of political structures regulating their relationship to the political center in Kabul? Power-sharing agreements entrench differences between groups in government by forcibly giving their identities political weight and relevancy, as continues to be the case in Lebanon. Creating such an agreement in Afghanistan would be risky and necessitate extreme care to avoid political gridlock.

Can the Taliban be trusted to ensure that al-Qaeda and the Islamic State do not operate in Afghanistan, especially with a reduced US security presence?

It is difficult to imagine how the United States could reliably monitor and enforce adherence to such a policy, given that Taliban intelligence will almost certainly not be sharing information with the US Central Intelligence Agency. A massively reduced US security contingent would also make monitoring whether al-Qaeda and the Islamic State are being hosted or tacitly accepted by the Taliban very difficult. The ability of the Islamic State, al-Qaeda, and the Taliban to simultaneously operate in Afghanistan would pose a formidable threat to Kabul’s authority and democratic consolidation. Additionally, it is extremely unlikely that the United States would re-enter Afghanistan militarily following a withdrawal, given the invasion’s growing unpopularity and the enormous amount spent by Washington to maintain its war effort. The Taliban might use this to their advantage and spread influence by force, or seize an opportunity to legitimize themselves as a political entity, ban al-Qaeda and the Islamic State, and more sustainably reduce the chance of US re-engagement.

How might a political settlement between Kabul and the Taliban affect the Taliban’s complicated relationship with Pakistan?

In the event of a substantive political settlement between the Taliban and Kabul, the Taliban’s relationship with Pakistan could change considerably. If the Taliban becomes a legitimate political entity in the Afghan government and no longer needs to exist in refuge as an illicit group, then it may provide a good opportunity for Islamabad to push harder to eradicate the group from the Federally-Administered Tribal Areas (FATA), Khyber-Pakhtunkhwa province, and other areas of the country where they allegedly operate. This would undoubtedly be a challenging and controversial undertaking in Pakistan, but such a scenario could help Islamabad catalyze the international development assistance Prime Minister Imran Khan has been seeking, rebrand its international image, and reduce the threat perception of neighboring countries regarding nonstate groups tacitly allowed to operate out of Pakistan. This is contingent upon a settlement in Kabul that is anti-India enough for Islamabad’s liking, however.

How will Kabul expand and consolidate its authority across Afghanistan?

The US government’s enabling of corruption and security sector abuse in the Afghan government leave Kabul in a weak position to negotiate during the Intra-Afghan Dialogue. This is especially relevant as, under the terms of the peace deal, Kabul will soon have a reduced security sector umbrella from the Pentagon. Without US support, Kabul will have to contend with an even wider power vacuum across the country, while competing with the Taliban which controls more territory in Afghanistan than at any other time since its ousting from power in 2001. This and other shortcomings in substantive political planning bring to mind the Geneva Accords and Soviet withdrawal from Afghanistan three decades ago, which gave way to the collapse of the government in Kabul and consolidation of Taliban control shortly thereafter. Solidifying political power in Kabul will be extremely challenging, especially in lieu of powerful illicit networks throughout Afghanistan as well as locally and regionally organized power structures. The way that the Afghan government engages these actors to consolidate its authority will heavily impact Afghanistan’s political development for decades to come.

Will the Intra-Afghan Dialogue include Afghanistan’s complex illicit patronage networks?

The peace deal entirely ignores illicit economies and networks in Afghanistan that undergird conflict, corruption, instability, and international criminal patronage. The optimization of illicit economies to the chaos of war and lack of centralized political authority make them one of the most devastating threats to peace and the Intra-Afghan Dialogue. Powerful criminal patronage networks, dealing in smuggled goods such as talc, poppy, fuel, methamphetamine, timber, as well as human trafficking, will undoubtedly resist a stronger Kabul. The actors who benefit from those trades have a strong stake in Afghanistan remaining unstable and malleable to their interests. Additionally, the Afghan government cannot realistically expect to consolidate its authority across Afghanistan and create a power-sharing agreement with the Taliban if illicit structures intertwined with the war environment are excluded from peace talks. A negotiated settlement would be under serious risk without sufficient attention to illicit networks, their regional and international entanglements, and a deep understanding of their interests and motivations.

Will US and NATO security forces be able to disengage completely? If not, what might a partial withdrawal look like?

The signing of the US-Taliban peace deal saw a media frenzy about the full withdrawal of US and NATO forces, but what are the chances of this actually coming to fruition? It remains unclear what the full extent of the withdrawal will be—whether truly complete or more similar to the continued US presence in Iraq. Perhaps the United States will maintain air support and advising on the ground to ensure that the terms of its deal are being respected. In this case, the involvement of the United States—should Kabul and the Taliban come to a power-sharing agreement—could find Washington providing assistance to a security sector that includes the Taliban. That being said, withdrawing from Afghanistan and possibly contributing to a failed state scenario would severely delegitimize the United States’ democracy support and state-building projects around the world. Each aspect of the monitoring and evaluation for this deal will prove extremely difficult for every actor involved, state and nonstate, and this will significantly challenge implementation of the deal’s ongoing clauses, including the eventual withdrawal of foreign military forces.

What about Afghan refugees residing in Iran, Pakistan, and elsewhere?

The Afghan refugee population totals around 2.5 million and represents the second-largest protracted refugee population in the world. Will Taliban-Kabul negotiations involve any provisions for refugees, most of whom are forced to reside as third-class citizens in Pakistan and Iran? Rebuilding the Afghan economy will certainly necessitate an influx of labor and skills, but an overall lack of economic opportunity in Afghanistan is already a contributor to the appeal of nonstate actors and extremist groups. If the Afghan government (possibly in conjunction with the Taliban) is unable to provide a reasonable livelihood, then repatriating several million Afghan refugees will do little to help rebuild the country and lift people out of poverty.

Harris Samad is a project assistant at the Atlantic Council’s South Asia Center.