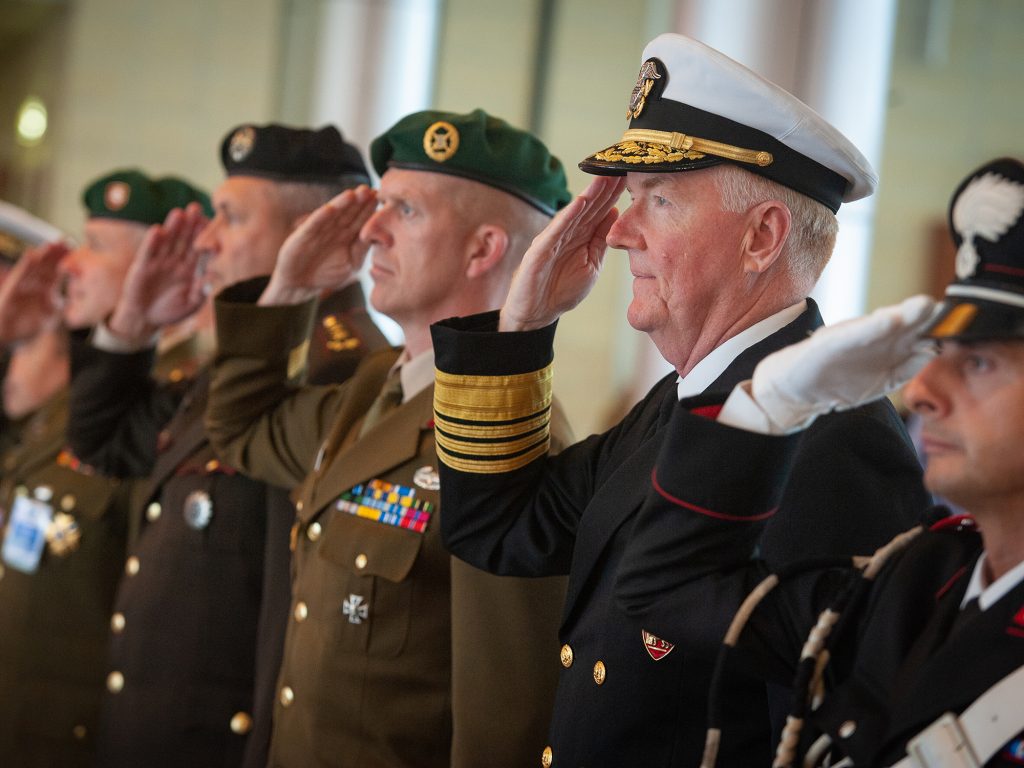 Throughout history the Baltic Sea has been home to great naval fleets. Naval strength is vital to achieving maritime security, which is an essential component for regional stability and a thriving economy. Indeed, the Baltic Sea remains a critical artery of commerce, with up to 15 percent of the world’s cargo traffic transiting the region.

The dynamic security environment in the Baltic Sea demands cooperation to ensure freedom of movement, and consequently economic prosperity. This requires commitment from regional partners and allies because, as Lithuanian Defense Minister Raimundas Karoblis observed, “For many reasons—geographic, historic, social—the Baltic region is bound to remain the most vulnerable part of the alliance.”

The US Navy is deeply committed to the Baltic region, and continues to work alongside allies and partners to deter potential adversaries and provide collective defense. For this reason, I invited the top military leaders from Estonia, Latvia, and Lithuania to my headquarters in Naples, Italy. During the two days with the Baltic chiefs of defense, we will discuss regional challenges and opportunities. As a NATO and US military commander, I deeply value the contributions of the countries’ navies, particularly the geographic expertise every one of our Allies brings. Together, we create a maritime force greater than the sum of the individual navies. This holds particularly true in the Baltic Sea.

Every Baltic country has something powerful to contribute, and when they do, our unified strength is simply unmatched. We recently demonstrated this during BALTOPS 2019—the 47th iteration of the region’s largest maritime exercise. BALTOPS is a terrific opportunity for Allies and partners to improve interoperability and warfighting skills while learning from each other. In this year’s highly successful exercise, we brought together fifty ships, thirty-six aircraft, two submarines, and 8,600 service members from eighteen Allies and partner nations.

I’m proud of what we accomplished together in BALTOPS. We demonstrated our combined and enduring willingness to work towards common goals of regional security and stability. Yet we must continue to challenge our naval forces to further develop our mutual capabilities and interoperability in the unique and challenging Baltic environment. As I will discuss with the chiefs of defense, maintaining Baltic maritime security will not be easy, but I know the nations of Estonia, Latvia, and Lithuania are up for the challenge.

Estonia’s continued participation in BALTOPS, its recent modernization of its Sandown-class minehunters, as well as its commitment to transfer their expertise to our partners through cross training is mutually beneficial to our combined maritime forces. Latvia, which recently celebrated its navy’s centennial, had its mine countermeasures (MCM) ship, Virsaitis, participate in BALTOPS, serving as the command and control vessel for a multinational MCM task unit. Latvia also hosted an important amphibious landing, where the Spanish navy’s ESPS Juan Carlos I landed forces on its shores. Lithuania debuted a range where a Hellfire missile was test launched—a first at BALTOPS. Lithuania also provided an MCM ship and a patrol craft as part of the Baltic Naval Squadron or BALTRON.

We must commit and invest in a robust and capable naval presence to maintain regional stability. Not doing so could be far more costly. Equitable and proportional contributions to maintain a unified naval presence strengthens trust. Nowhere is this need more relevant than in the Baltic Sea. The region has long witnessed innovative warfighting—the first modern-era mines were laid in the Baltic Sea in the mid-nineteenth century. This pioneering defense impacted the balance of power between opposing fleets, and was again implemented during World War I, along with the rise of submarine warfare. World War II again witnessed new mining techniques and brought air power into the Baltic Sea, continuing the trend of the region employing innovative technologies in new warfighting domains. The Baltic nations are well suited to develop skills to confront potential maritime security issues, which threaten regional stability and by extension the economic prosperity that can affect the global economy, including our own.

Beyond maintaining the sea lanes open for all, a strong naval presence is the only concrete way to deter aggression and monitor unknown intentions, including Russia’s robust Anti-Access Area Denial (A2AD) network, and the deployment of Iskander ballistic missile batteries to the Kaliningrad enclave. Over the past decade, Russia has displayed a general disregard for sovereign neighbors’ territory and maritime international laws. They invaded Georgia, illegally annexed Crimea, and all but claimed the Sea of Azov as their own—stopping and detaining cargo ships and mariners at will. For these reasons, a capable naval presence in the Baltic Sea is critical.

We applaud the wonderful citizens of the Baltic nations for their desire to live free and their efforts to create a safe and secure environment. They have fought for their freedom and for the right to chart their own destiny. As a military commander who has had the opportunity to visit the Baltic region on numerous occasions, we recognize their commitment to regional security, and thank them for their continued participation in BALTOPS and their navies’ contributions toward a stable maritime environment.

A strong alliance of navies will enable us all to maintain the most basic human rights: freedom and safety. We must remain dynamic in our capabilities while also prioritizing our resources to maintain and expand naval capabilities that remain far ahead of those who seek to disrupt stability. Continued investment in our collective naval capabilities will allow us to ensure regional security and prosperity well into the future.