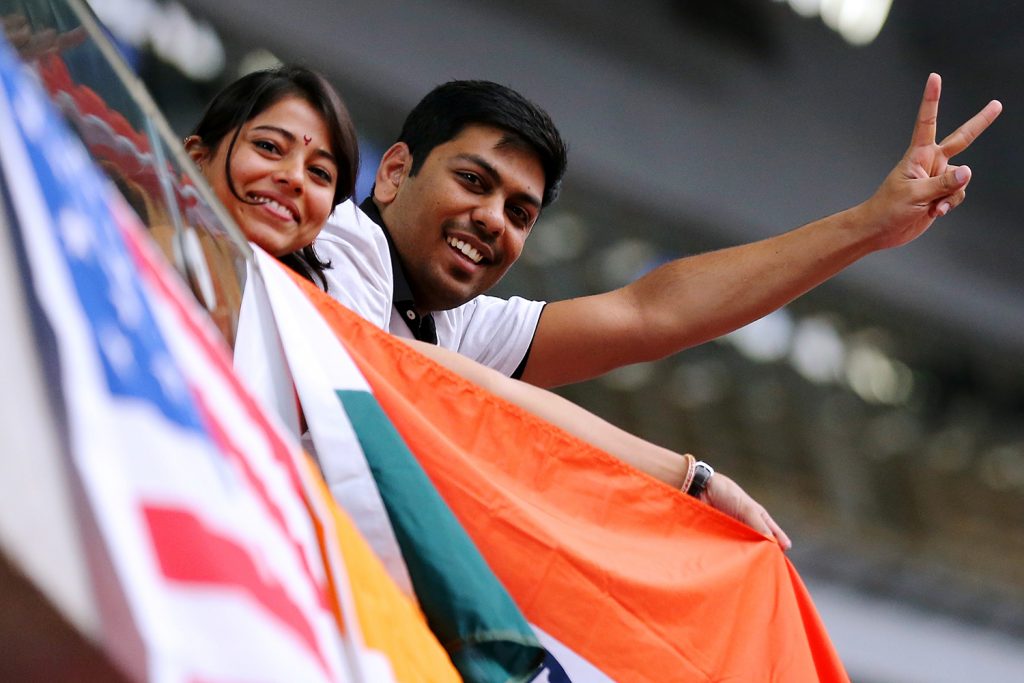 In her acceptance speech at the Democratic National Convention, Senator Kamala Devi Harris (D-CA) put her Indian roots on full display. She spoke movingly about her Indian mother and gave a shout out to her “chittis” or, aunts in Tamil. Just a few days later at the Republican National Convention, former Ambassador Nikki Haley echoed Senator Harris, and invoked stories of overcoming racism as the daughter of Indian immigrants. Over the last few weeks, both Democrats and Republicans have painted a picture of the American dream through the experiences of Indian Americans in an attempt to court voters.

The August 11 announcement of Senator Kamala Devi Harris as the first Black woman and first Asian American vice-presidential candidate on a major party ticket made waves throughout the United States and abroad. Harris’s upbringing as the daughter of Jamaican and Indian immigrants has been a big part of her appeal since her bid to run for president early last year. As former Vice President Joe Biden tries to get out the vote among traditionally Democratic Black and Asian voters, one key question is whether Senator Harris can help drive voter turnout among these key groups.

In the lead-up to the 2016 presidential elections, Indian Americans raised over $10 million towards the Democratic ticket, enthusiastically endorsing a bid for a Clinton presidency. However, as one of the most powerful and influential fundraising demographics for any given campaign in US politics, some Indian American donors have slowly leaned towards President Donald J. Trump. From serving as Indian Prime Minister Narendra Modi’s opener during his September 2019 visit to Houston to a showy state visit to Modi’s hometown in Gujarat in February, President Trump has made unprecedented efforts to connect and reach the Indian American community.

Over the course of the last four years, the blossoming of the Trump-Modi relationship has led to significant advancements in the bilateral relationship, including expanding the two countries’ defense partnership and official visits by President Trump to Delhi and Prime Minister Modi to Washington—all against the backdrop of a simmering trade deal. In addition, since 2010, India has been the linchpin of the US Indo-Pacific strategy to counter China. Not only has India been seen as a useful tool for containing Chinese influence in the region but supporting India has also become good politics in the United States, at least with a large subset of the Indian American diaspora.

The Asian American community has historically supported the Democratic Party in presidential elections—exit polls from 2016 indicate that four out of five (79 percent) Asian Americans voted for Hillary Clinton, while only 18 percent voted for Trump. And South Asians (most of whom are Indian-American) were among Clinton’s strongest supporters, with 90 percent voting for the Democratic candidate. The 2016 poll numbers came from a culmination of efforts made by the Obama-Biden administration to forge an otherwise unlikely friendship with the Modi government. In Modi’s first visit to Washington, DC, President Obama gave a personal fifteen-minute tour of the Martin Luther King Jr. Memorial; in 2016, Modi was invited to address Congress, delivering an ode to US-India relations. The Democrats were not only appealing to Indians halfway across the globe but were wooing a future electorate of wealthy and educated party donors who gradually played a decisive role in President Obama’s 2012 reelection.

Until 2016, the majority of the roughly 4 million Indian American voters skewed towards the Democratic Party, much has changed since the Obama years, including the presence of the Republican Party’s efforts with this demographic. Beyond the symbolic bonhomie, the Democrats have continued to make critical remarks about the state of religious freedom in India and Kashmir more generally.

However, President Trump has made a concerted effort to court the Indian American vote, including running targeted ads and participating in rallies with the Indian American community. The increased attention and evolving Trump-Modi dynamics, in addition to prominent Indian American Republicans like Nikki Haley and Bobby Jindal may be contributing to an increasingly shifting Indian American political base. The nearly 50,000 people that attended the “Howdy, Modi!” rally in Houston in 2019 showed that Prime Minister Modi has broad and deep support among a sizeable portion of Indian American community. And these voters are likely to remember that Prime Minister Modi used his iconic election slogan when announcing President Trump to the stage, stating in Hindi “ab ki baar Trump sarkaar,” or “this time around, it will be a Trump government.” The two leaders’ apparent friendship was in full view as they walked out holding hands, and this display of camaraderie brought down the house. It is no wonder then that the Biden-Harris campaign are likely concerned that some of the very same Americans who voted for Hillary Clinton in 2016 and donated to her campaign were the same people cheering at the “Howdy Modi!” rally.  The unrelenting support Modi continues to garner in the United States with a number of Indian American voters is significant and should not be overlooked.

Of course, the Indian American community is not a monolith and there are large swaths of the community that see themselves in Senator Harris’ story. Many have the same picture of sari-clad relatives as immigrants in America. And it is important to note that there is also a subset of Indian American voters that have been increasingly critical of the policies of the BJP-led government, including sitting congressional members like Senator Harris and Representative Pramila Jayapal (D-WA). Harris has continuously stated that she supported strong ties between India and the United States, although she was critical of Modi’s revocation of Article 370, stripping the autonomous status of Jammu and Kashmir. Harris also stood by fellow Congresswoman Jayapal on human rights issues in India, and a recent incident highlighted her position when India’s Minister of External Affairs S. Jaishankar refused to attend a meeting if Jayapal participated. Harris tweeted “It is wrong for any foreign government to tell Congress what members are allowed in meetings on Capitol Hill.”

Will having an Indian American on the ticket be enough to keep Modi-supporting Indian Americans from defecting to Trump, or will Senator Harris help turn out Indian American voters for the Democratic ticket? Only time will tell. In the meantime, the Biden-Harris campaign should prepare itself for a demographic leaning more across the political spectrum than in 2016—with some confirming that India and Indian-related policies figure significantly into their voting decisions.

Safiya Ghori-Ahmad is a non-resident senior fellow at the Atlantic Council’s South Asia Center and serves as the South Asia Director at McLarty Associates.

Fatima Salman is an associate director at the Atlantic Council’s South Asia Center.