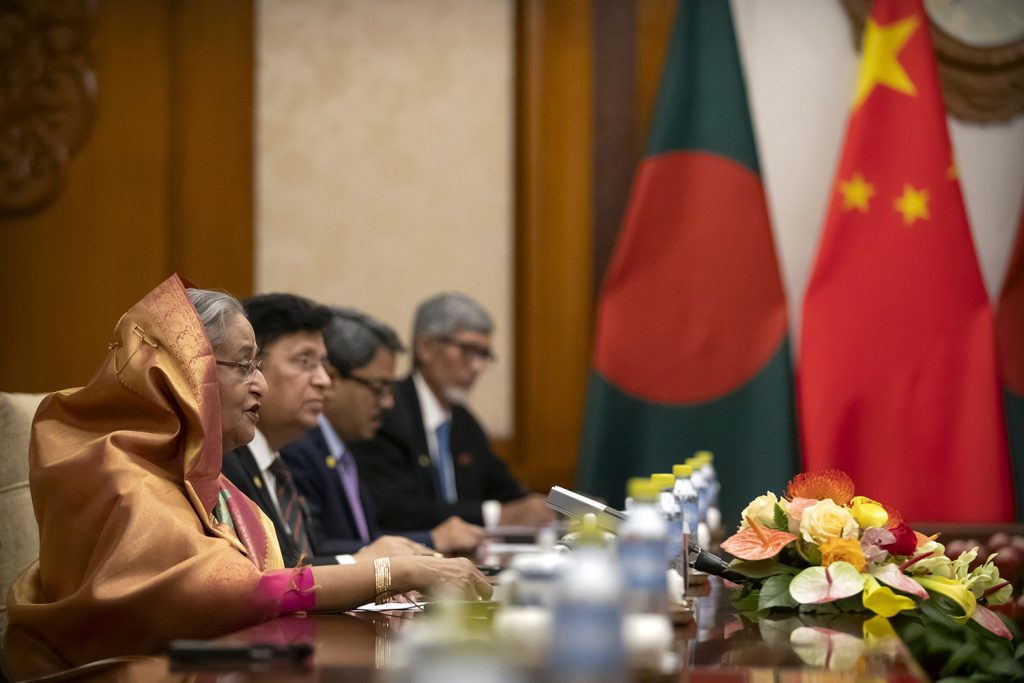 The ongoing tensions and stalemate between India and China in Ladakh along the Line of Actual Control (LAC) has brought not only the Sino-Indian rivalry into the spotlight, but also India’s relationships with its neighbors. Unlike previous instances, when India used to enjoy unqualified support from all its neighbors save Pakistan, the clash with Beijing has produced a deafening silence. Worse, the Nepalese parliament chose this as the moment to approve a revised map of the country, including three areas it disputes with India. In Bangladesh, the government received an  offer from Beijing for tariff exemptions for 97 percent of Bangladeshi products with immediate effect.

Rather than focusing on the merits of Beijing’s offer or the recent clash in Ladakh, Bangladesh has been focused on the Indian media’s coverage of the tariff deal, particularly a report which used a derogatory term to describe recent Chinese engagements with Bangladesh. The report suggested that China is offering ‘charity’ to woo Bangladesh. Public outrage, particularly in social media, forced the newspaper to apologize and the Bangladeshi foreign minister to weigh in.

Intense reactions against the report once again revealed the persistent unease among Bangladeshis about the relationship with India, despite both governments’ claim that their relationship has entered a golden era. For many Bangladeshis, there is an impression that the relationship has become very lopsided in favor of India. In March, ahead of a scheduled visit of the Indian Prime Minister Narendra Modi, similar strong adverse reactions were expressed. The trip was cancelled due to the COVID-19 pandemic.

While attention on that particular media report has now faded, the Bangladesh-India relationship has remained in the spotlight, but with a new twist to it—the looming shadow of China. What was previously a matter of academic discussion has now become a standard media talking point. For the past months, the Indian media had intensified its concerns that China has made inroads to Bangladesh through massive investments and fear that now Bangladesh is tilting against India. Undoubtedly, the Bangladesh-China relationship has entered into a new phase in recent years, exemplified by Bangladesh joining the Belt and Road Initiative (BRI) and purchasing submarines, and China investing in the country to the tune of $38 billion, to name but a few. China’s decision to allow tariff free access came on the heels of its proposal to establish sister cities. These efforts have come as China, in the past decade, began to aggressively court South Asian nations to extend its sphere of influence in South Asia. The Bangladesh-China relationship which was once limited to a few sectors, particularly in defense purchases, has been transformed, as China has become the largest trading partner of Bangladesh, surpassing India.

These developments have angered India so much so that in early 2018, Prime Minister Sheikh Hasina had to reassure India that it need not to worry. India has been the staunch backer of the Hasina regime since it came to power in 2009. The memoir of former Indian President Pranab Mukharjee provides an impression that India played a role in ensuring the transition of power from the military backed government to the Awami League in 2008. There is a widespread understanding that without the active support of India, particularly the Indian foreign secretary’s visit to Bangladesh in 2013, it would have been difficult for the AL to proceed with the 2014 controversial election. For the past decade, India has extended unqualified support to the ruling AL. Faced with Chinese competition, India has extended its economic relationship through offering the Bangladesh government credit lines twice, but these pale in comparison to what Beijing is offering. Besides, these financial packages by no means were enough to hide the highly unequal poltical relationship between these two countries. While Bangladesh for its part assiduously met India’s demands of providing free transit to Indian goods, allowing the use of Bangladesh’s ports, setting up a coastal surveillance system radar in the country, and permitting withdrawal of water from the Feni river, legitimate claims against India by Bangladesh have been brushed aside and some Indian politicians have portrayed Bangladeshis with disdain. This  unbalanced relationship, along with India’s policy towards other neighbors, might have given an impression that India believed Bangladesh would always remain within New Delhi’s sphere of influence.

As such, Bangladesh’s closeness with China, especially at a time when the Indo-Chinese rivalry has reached new heights, and Beijing’s other attempts to align with smaller nations has become a source of discomfort to India. The growing criticisms of Bangladeshi policy—veiled in concerns about falling into a Chinese “debt trap”— by the Indian press and think tanks are reflection of this displeasure.

There is no reason to think that China’s posture to Bangladesh is benign, however. The geopolitical tug-of-war with India began soon after 2014 and intensified over the years, as both sides have been trying to keep Bangladesh within their respective folds. While Indian policy has been plagued with short term thinking and attachment to the ruling AL, China has played a long game and seems to be making a serious headway. However, the deep financial pockets and dazzling investments are not bereft of China’s geo-strategic agenda. The conspicuous absence of the United States in the region, and its reliance on India to do its bidding, combined with India’s strained relationship with its neighbor have facilitated China’s aggressive moves to extend its sphere of influence in the region. But Indian policymakers and foreign policy think tanks are exclusively focused on the Chinese machination, while ignoring the limitations of their own policies. It seems that a retrospection is not forthcoming. But India will definitely not let its all-weather ally slip away from its orbit.

Some are welcoming the balancing act of the Hasina government; others are confounded as to why she is taking the risk of annoying her principal backer. It has now become the conventional explanation that Bangladesh’s new closeness with China is predicted by its need for resources for economic growth, especially infrastructural development. The crux of this argument is that the Bangladesh-India relationship will be more political while the relationship with China will be limited to the economic arena.

Whether such separation is possible and whether economic consideration is the only factor driving the Hasina government’s decision is questionable. Political considerations are also behind the gradual shift. With two controversial elections, in 2014 and 2018, the ruling party lacks moral legitimacy in Bangladesh. It has focused on building its performance legitimacy, hoping economic growth can justify the lack of democracy and accountability. But this hope has faded over the last year, as economic and social disparity has increased. COVID-19, particularly the failure of the public health care system and the dramatic rise of the number of poor people, has laid bare the underlying weaknesses of the AL economic strategy. Yet, as the ruling party intends to continue the same strategy it has opted to lean on China for financial support. The AL’s penchant for authoritarianism is increasingly making China a better option than its democratic neighbor. Despite severe democratic backsliding in India in recent years under Modi, whether it can continue to invest politically to a growing authoritarian regime remains an open question. The irony here is that while India’s support made it possible for the AL to shift towards authoritarian governance, the ruling party is bringing Bangladesh closer to an authoritarian regime at the expense of its one-time sponsor.

China and India just had their worst clash in forty-five years. What do we know?

On June 15, India and China faced off in a clash along the Line of Actual Control (LAC or the de-facto border in the Ladakh region), resulting in the death of at least twenty Indians and an unknown number of casualties on the Chinese side. This has been the first set of fatalities along the Sino-Indian border since the 1975 Tulung La ambush in present-day Arunachal Pradesh, the easternmost state of India, when four Indian soldiers died. While shots were apparently not fired in this recent exchange, the hand-to-hand combat was deadly. What triggered the worst clash in forty-five years? And how will India respond?