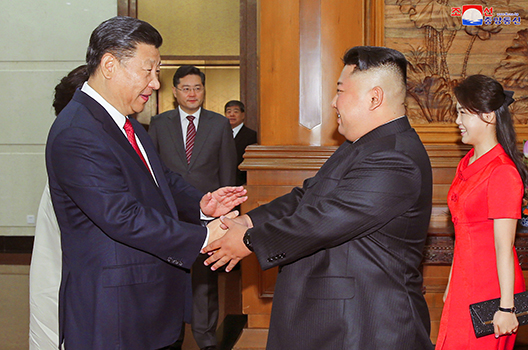 Japanese Prime Minister Shinzo Abe’s meeting with Chinese President Xi Jinping in Beijing on October 26 marked the first time in seven years that a serving Japanese prime minister has traveled to China for official bilateral meetings with his counterparts. Lost in the headlines of this historic summit was the fact that the two leaders discussed North Korea and recommitted their nations to close cooperation on denuclearization and the implementation of United Nations Security Council resolutions aimed at Pyongyang.

Many experts are cynical about Chinese cooperation on North Korea. They tend to focus on the unique aspects of the China-North Korea relationship, such as shared communist ties and geographical proximity, and view China’s proactive diplomacy with North Korea, starting with the first summit between Xi and North Korean leader Kim Jong-un summit in March, as an attempt to maximize its own interests, which do not coincide with those of the United States and its allies.

Chinese diplomacy on North Korea, however, can help achieve some positive results for the United States and its allies in the region. Therefore, it is important for policy makers in the United States and allies in East Asia to understand China’s motivations in the region, in general, and on North Korea, in particular. This will help them work effectively with China while guarding against Chinese actions that could undermine their strategic priorities.

When it comes to North Korea, China prioritizes stability over all else, including denuclearization. For Beijing, North Korea is neither a primary challenge to its stability, nor does Pyongyang’s nuclear ambition pose a direct threat to China’s national security. Instead, Beijing believes that it is Washington’s reaction to North Korea that in many ways represents the most immediate threat to regional stability.

Beijing’s main concerns on North Korea are: (1) the impact of excessive sanctions or US military actions that could cause a refugee crisis with North Koreans streaming across their border into China; (2) reinforcement of a US military presence in the region and the use of North Korea as an excuse to sustain the de facto US-Japan-Republic of Korea (ROK) alliance; (3) criticism of China for its perceived responsibility for North Korea’s actions, and possible punishment by the United States as a consequence; (4) the negative economic impact of sanctions, particularly on China’s northeastern provinces; and (5) the possibility of nuclear accidents and influence of nuclear tests on China’s territory. Most of these concerns are linked to US actions. This is why Beijing looks to Washington when North Korean nuclear tensions are heightened.

Consequently, China’s response to the North Korean nuclear crisis primarily focuses on the management of relations with the United States. When US President Donald J. Trump’s administration escalated its maximum pressure campaign on North Korea, including strongly calling for Chinese cooperation on the implementation of tougher UN Security Council resolutions, Beijing took steps to manage the situation within a US-China context.

North Korea’s charm offensive early this year and meeting in Singapore between Trump and Kim on June 12, however, relieved much of the pressure felt by Beijing. China is eager to preserve the current positive atmosphere surrounding issues related to North Korea.

Beijing definitely does not want to see further nuclear and missile tests by North Korea. It wants Kim to keep his commitment to denuclearization. China’s encouragement of North Korea to move in this direction is good for the United States and its allies. Xi’s absence from celebrations of the 70th anniversary of North Korea’s founding in September could have been a signal to Pyongyang that Beijing is not satisfied with North Korea’s progress on denuclearization.

Denuclearization of the Korean Peninsula is clearly in China’s interest. Most Chinese officials and experts believe that the United States is using North Korea’s drive for nuclear weapons as an excuse to maintain and expand its military presence in Northeast Asia. This belief was demonstrated by Beijing’s opposition to the deployment of the US Terminal High Altitude Area Defense (THAAD) missile defense system in South Korea. Progress on denuclearization could remove the US justification for its military build-up and allow Beijing more room to press Washington to scale back its forces in the region.

Progress on denuclearization would also open the door to more economic exchange with North Korea, although this is not something that Pyongyang would explicitly endorse. In light of its own experience, China believes close economic ties would be the best way to enable a soft landing for North Korea’s economy. Furthermore, China’s Jilin and Liaoning provinces, which share a border with North Korea, have suffered from a traditional dependence on state-owned enterprises. They could greatly benefit from the growth that would come about as a consequence of increased Chinese-North Korean trade.

Despite the advantages of denuclearization, China places a higher priority on long-term stability than these short-term gains. While Beijing desires eventual progress, it currently has no incentive to compel North Korea to take quick action, putting it at odds with the United States and its allies.

The United States and its friends should also recognize that China’s active North Korean diplomacy aims to create an advantageous regional strategic environment in the medium and longer term. Simply put, China aims to compete for influence over the Korean Peninsula, weakening the US-ROK alliance and the US military presence in Northeast Asia. The United States and its allies must guard against China using easing tensions with North Korea to gain an edge in this competition.

Against this backdrop, the United States, Japan, and South Korea should deal with China with a thorough, shrewd, and consistent strategy on North Korea. US-China relations are increasingly deteriorating. Although China appreciates the South Korean president’s policy of engagement with North Korea, negative feelings over the deployment of THAAD persist in Beijing. Meanwhile, Japan is strengthening its ties with the United States by buying into a shared Free and Open Indo-Pacific vision.

While the conversation between Abe and Xi on North Korea might have been short, it should be seen as a critical opportunity to jumpstart a new allied strategy to effectively engage China on the issue of North Korea.

Taisuke Mibae is a visiting senior fellow with the Asia Security Initiative of the Atlantic Council’s Scowcroft Center for Strategy and Security. He is also a minister at the Embassy of Japan in Washington. He earlier served as a minister covering Korean affairs at the Japanese Embassy in Beijing. The views expressed in this blog post are the author’s own and do not reflect those of the Japanese government.