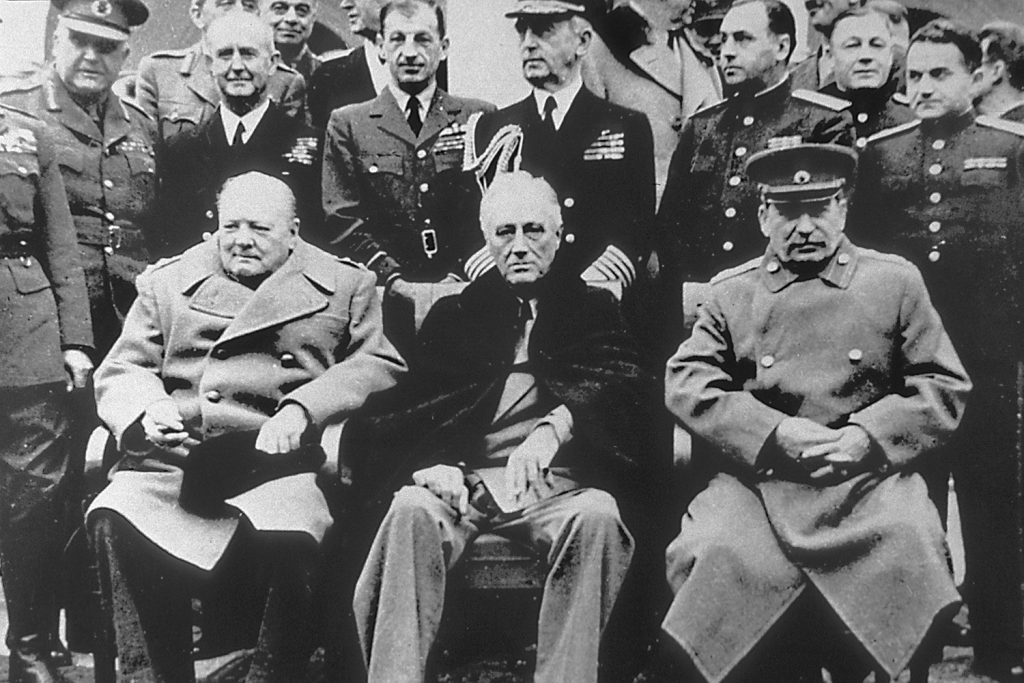 Seventy-five years ago, on February 4-11, 1945, US President Franklin Roosevelt, British Prime Minister Winston Churchill, and Soviet dictator Joseph Stalin met at the Yalta resort in then-Soviet Crimea to finalize their strategy for the remainder of World War Two and forge a post-war settlement. But within months, the Grand Alliance against Nazi Germany was breaking and the Iron Curtain descending on Europe’s eastern third, where it lasted for forty-five years.

“Yalta” (the conference and not the place) evokes powerful emotions to this day. For Russians, through the Cold War and today, Yalta symbolizes a pinnacle of great power comity and accommodation; the regime of Russian President Vladimir Putin has recently floated the idea of another Yalta Conference. For Poles, Balts, and many others in Central Europe, Yalta means a betrayal of their countries and the United States’ abandonment of its core values on the altar of Great Power politics; they (and Ukrainians) fear the United States will be tempted by a “second Yalta” in which Washington and Moscow make deals at their expense.

Americans had reservations about Yalta nearly from the beginning. For decades after, Republicans attacked Roosevelt’s conduct at Yalta as the product of naiveté about Stalin or worse. Partisanship colored much of that, but Roosevelt himself and his chief of staff expressed unease about what they had just signed up to at Yalta:

“This [agreement on Poland] is so elastic that the Russians can stretch it all the way from Yalta to Washington without ever technically breaking it,” Admiral William Leahy, Chief of Staff to Franklin Roosevelt.

“I know, Bill, but it is the best I can do for Poland at this time,” Franklin Roosevelt. (“Roosevelt: Soldier of Freedom,” James MacGregor Burns, page 572.)

What happened at Yalta? What lessons does it hold for us today?

By February 1945, the Allies were winning the war and Roosevelt looked to lock in victory and set to order a post-war world. As Woodrow Wilson did with his Fourteen Points near the end of World War One, Roosevelt was aiming high: he and Churchill had issued the Atlantic Charter in August 1941 that laid out post-war principles, including freedom for all nations to choose their form of government, an open trading system, freedom from external aggression, and a broader system of general security to prevent a return of great power rivalry and war.

At Yalta, Roosevelt sought to apply these principles and thought he could bring Stalin into his new, rules-based system. He achieved a lot: Stalin’s agreement to enter the war against Japan three months after victory over Germany; agreements about Germany’s occupation, including an occupation zone for France; and Stalin’s acceptance of his signature initiative, the United Nations, which was intended, as Wilson had intended for the League of Nations, to enforce the post-War order. (To obtain Stalin’s agreement to the UN, however, Roosevelt accepted a Soviet right of veto in the UN Security Council, a sweetener which weakened the UN from the beginning.)

Roosevelt also got Stalin’s agreement to a Declaration of Liberated Europe, a document that sought to apply the Atlantic Charter’s principles to the countries being liberated from Nazi occupation, especially Poland, for whose sake the UK had declared war on Germany. A key passage read:

“This is a principle of the Atlantic Charter—the right of all people to choose the form of government under which they will live. [T]he three governments [US, UK, Soviet] will jointly assist the people in any European liberated state or former Axis state in Europe where, in their judgment conditions require…to form interim governmental authorities broadly representative of all democratic elements in the population and pledged to the earliest possible establishment through free elections of Governments responsive to the will of the people.”

But that language met a hard reality: by February 1945, Soviet armies were in control of most of Poland and, as Roosevelt and his team knew, Stalin was already installing communist governments there and in other places within his control.

Whether or not the Yalta agreements were the best Roosevelt could do for Poland at that time, they were a bad deal. The United States accepted weak promises from a dictator on behalf of an ally, Poland, that had fought from the first day of World War Two to the last, on all European fronts, without surrender or national collaboration. By extension, the United States was throwing up its hands as the Soviet Union imposed its rule on Central and Eastern Europe.

The failure of the Declaration of Liberated Europe to provide for Poland’s and Central Europe’s liberation colors how the Yalta Conference has been regarded ever since. Roosevelt’s reputation has taken hits for Yalta.

The consequences were catastrophic. It took the German conquest of France in June 1940 to substantially weaken the political power of the isolationists. By then, good outcomes were unobtainable. The United States was playing catch up from a bad position. When the United States entered World War Two in December 1941, it needed Stalin to defeat Hitler.

From that point, the bad choices Roosevelt faced at Yalta were nearly baked in. The United States might have tried to force a showdown with Stalin over Poland and Central Europe at an earlier phase of the war. The Tehran Summit in November 1943 was one such occasion. George Kennan, the United States’ first Soviet expert and the number two at the US Embassy in Moscow, argued that the Warsaw Uprising, the desperate revolt against the Germans by forces of the free Polish Government in August 1944 provided another. The United States might have presented the Soviets with a choice of continued support from the United States, but only under the condition that they change their direction toward Poland and Central Europe (George Kennan, “Memoirs,” pg. 211).

Instead, Washington stuck with a declaratory policy based on the Atlantic Charter rooted in Wilsonian principles, but without the power to make good on it. Immediate victory over Germany took priority, and the United States was not willing to risk a showdown with Stalin over Poland. Perhaps to its credit, neither was the Roosevelt administration ready to openly accept a sphere-of-influence arrangement with Moscow, under which the United States would lock in Stalin’s post-war cooperation by explicitly recognizing the Soviet Union’s right to “friendly,” i.e., communist-dominated governments, in Poland, the Baltics, and elsewhere in Central and Eastern Europe. (This was a live option at the time: Walter Lippmann, the foremost US foreign policy journalist, had been advocating such an arrangement as early as 1943; Walter Lippmann, “US Foreign Policy,” pg. 152).

The United States hoped for the best and approached the Yalta Summit in February 1945 in that spirit. Given Stalin’s subsequent domination of Poland and the eastern third of Europe, such hope seems fatuous.

Yet soon after Yalta, Roosevelt re-raised Poland, and pushed Stalin to take seriously the Declaration’s language about Poland. On April 1, 1945 he wrote to Stalin that a continuation of the “present Warsaw [Communist-dominated] regime” would be unacceptable and urged that a “new government” be established. “I must make it quite plain to you that any such solution which would result in a thinly disguised continuance of the present Warsaw regime would be unacceptable and would cause the people of the United States to regard the Yalta agreement as having failed” (“Foreign Relations of the United States,” 1945, Europe, Volume V).

What did this mean? If Roosevelt were serious about applying the Atlantic Charter principles to Poland and Central Europe, why had he accepted such a weak commitment from Stalin at Yalta? If Roosevelt’s agreements at Yalta were mere cynical cover for a sphere-of-influence deal with Stalin, why was Roosevelt trying to raise the Polish issue at all?

In dealing with Russian leaders, Roosevelt, like many US presidents after him, appeared to believe that gestures of good will and efforts to take account of legitimate Russian interests, would be enough to convince Russia to take a more tolerant approach to its neighbors. Roosevelt seemed to hope that the momentum of wartime alliance, and the prospect of post-war entente and US support, would appeal to Stalin as much as it appealed to him. If so, Roosevelt would not be the last president to project his open mind to Russian leaders who did not share it.

Roosevelt died on April 12, 1945. In the final weeks of his life, Roosevelt may have been coming to understand Stalin’s nature. But Yalta Europe, the divided continent that emerged from that Conference despite Roosevelt’s hopes, lasted for another forty-five years.

One is to be operationally serious: take care when negotiating documents based on general language of principles, like Yalta’s Declaration of Liberated Europe, with a leader who shares neither your values nor your underlying purposes. The Joint Comprehensive Plan of Action (the 2015 Iran nuclear deal), though incomplete and flawed, was specific and enforceable. The US-North Korea Joint Statement of 2018, however, was not; in its vague language, it recalls the Declaration of Liberated Europe.

Another is be realistic about relative strength, especially in the short term:  in its World War Two aims, the United States allowed a gap to develop between its principles and power on the ground. At Yalta, that gap left the United States without good options; it relied on rhetoric and hope instead. Yalta’s reputation for failed aspirations and naïve (or worse) retreat reflect the baleful consequences of doing so.

A third lesson is that core values may have more viability than it seems, especially in the long term: for two generations after 1945, foreign policy professionals and scholars concluded that Roosevelt’s weak defense of Poland at and immediately after Yalta was pointless (or cynical) and that the principles of the Atlantic Charter were inapplicable east of the Iron Curtain. Soviet domination there, it was implicitly (and sometimes explicitly) accepted, was forever. But it turned out otherwise. The Yalta Conference failed but Yalta Europe was not forever. The strategic vision that Roosevelt spelled out in the Atlantic Charter and sought to realize at Yalta—even if miserably—now seems the right one.

That vision, in fact, provided the basis for US policy toward Poland and Central Europe after the fall of the Iron Curtain in 1989. That policy sought to fulfill the promise of the Atlantic Charter for all of Europe—and this time was more successful. Nor is that narrative over. With respect to Ukraine, a country also seeking a future with an undivided Europe, those debates and those tensions apply to this day.

History may have lessons; the history of Yalta surely does.

“The truth shall make you free”

Historians have not been kind to Wilson or the Fourteen Points. They have fairly noted the inconsistencies, hypocrisies, and nasty unintended consequences of Wilson’s outline of US global leadership.