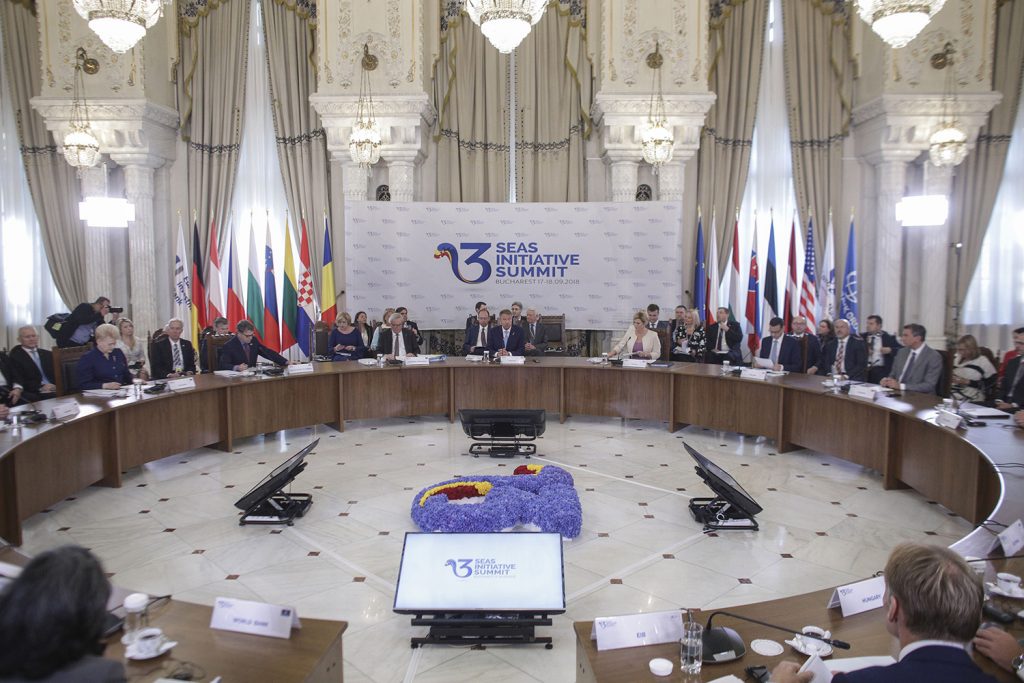 The Three Seas Initiative (3SI), founded in 2015 as a platform for twelve EU countries from Central and Eastern Europe to support cooperation across the Baltic Sea, Adriatic Sea, and Black Sea, aims to develop currently insufficient connectivity along the North-South infrastructure axis of Europe by advancing cross-border and transnational projects mainly in the areas of transportation, energy, and digital communication. By enhancing regional integration, promoting energy security, and leveraging market potential, the 3SI increases cohesion in Europe and strengthens the transatlantic community, while having positive impact on other countries in the region. Since its inception, the 3SI has gained momentum and a 3SI Investment Fund was established in Luxembourg to help finance investment projects in the 3SI countries by attracting private financing as well.

The International Monetary Fund (IMF) recently published a report on the existing infrastructure gap in the Central Eastern and South-Eastern Europe (CESEE), including the countries engaged in the 3SI. The report reflects the excellent work of the European Department of the IMF that has been supported by a number of the IMF Executive Board members, who emphasized a need for having a clearer understanding of the size of the infrastructure gap in the region compared to the advanced economies of Europe. The report was launched by the Managing Director of the IMF Kristalina Georgieva, at an event organized by the Atlantic Council on September 29.

The IMF report comes at a time when national authorities are considering different options for addressing the economic consequences of the COVID-19 crisis. This cutting-edge research empowers policymakers in the CESEE region with an innovative approach to strategic policy formulation in a highly uncertain social, political, and economic environment, where conventional wisdom and macroeconomic theory cannot deliver many tangible results. While all countries in the region have introduced fiscal stimulus packages and adopted both standard and unconventional monetary policies and ad-hoc macroprudential measures to support their hard-hit economies, the future-oriented support packages seem limited in their ability to deliver sustainable growth and convergence with the initial EU15.

Going forward, the fiscal space of CESEE governments is bound by inherent budget constraints, despite the temporary suspension of certain EU budget rules, while monetary policy is also approaching its limitations. In challenging circumstances, unconventional measures are required, and they have proven to be very effective, but in the medium and long term there is no substitute to sound economic policies and structural reforms.

The CESEE countries would be justified by gradually moving away from indiscriminate policy support to better targeted strategic policy resource allocation and growth-enhancing infrastructure projects. Furthermore, public spending should shift towards building human capacity and a massive supply of public infrastructure, which could also crowd-in private investments, facilitate resource re-allocation, promote sustainable growth, and support a structural transformation towards a more resilient economy. This idea makes the conclusions of the above-mentioned IMF report on the infrastructure gap even more compelling. In what follows, it is important to emphasize three specific findings.

First, the size of the infrastructure gap in the 3SI countries relative to the EU15 countries is very large and amounts to $1.2 trillion over the next ten years (or 8 percent of gross domestic product per year). This only refers to three sectors: energy, transportation and IT infrastructure, and it is calculated to reduce the gap by 50 percent—a more realistic objective to be achieved. While this gap is unevenly distributed among the 3SI countries and between the three sectors, one thing is clear: each country would benefit from investing more in infrastructure both internally and regionally.

Second, the current fiscal multipliers are exceptionally high—that is, the estimated impact of each dollar being spent. In its most recent Fiscal Monitor, the IMF demonstrated that, in advanced economies and in emerging economies alike, public investments in infrastructure could have up to a four-times higher fiscal multiplier during a recession than during normal times. It means that each dollar spent building infrastructure during a recession mobilizes four times more dollars than in normal times. For countries operating under long-term budget constraints, and especially for countries with a lower stock of capital (which is the case for the 3SI countries relative to EU15), the IMF report on infrastructure calculates that a permanent increase in public investments of 1 percent of GDP would lead to a permanent increase in GDP of 2-2.5 percent. Moreover, the investment-driven growth would be sustainable, even if the increase in public investments is financed by debt, because public debt would eventually drop as a share of GDP as the pace of economic growth would be higher than that of debt accumulation. There are also second-order effects, leading to higher private consumption and further gross capital formation.

In addition, it is important to underline that while it is difficult to extrapolate from estimates on the current crisis, increasing public investment could yield substantial benefits for the recovery, if countries improve their governance and public finance management frameworks. In the short-term, increased infrastructure spending can boost both demand and employment, while in the longer-term it would ensure sustainable development and faster convergence with the EU15. However, countries embarking on greater infrastructure spending should also strengthen their infrastructure governance to achieve more effective and integrated public infrastructure management, specifically needed for well-designed public-private partnerships. Moreover, they should reprioritize capital spending towards better planned and managed projects. In order to realize greater cross-border collaboration, they should also review their capacity constraints. To these ends, they could benefit from the IMF Public Investment Management Assessment, a tool designed to identify and improve gaps in infrastructure management.

The United States has already pledged an important investment in 3SI infrastructure projects, seeking to advance the cross-country connectivity prospects in the region. We praise the fact that, on November 18, the US House of Representatives unanimously passed a bipartisan resolution “expressing support of the 3SI in its efforts to increase energy independence and infrastructure connectivity thereby strengthening the United States and European national security.” This, together with the recent EU recovery plan, is paramount for successfully closing the infrastructure gap in the region. The 3SI has the potential to become an infrastructure-driven framework to promote development, security, and integration in our region.

Piotr Trabinski serves as an executive director at the IMF Executive Board, representing Poland

Daniel Palotai serves as an executive director at the IMF Executive Board, representing Hungary

Liviu Voinea serves as a senior advisor to the executive director at the IMF Executive Board, representing Romania

Tsvetan Manchev serves as an advisor to the executive director at the IMF Executive Board, representing Bulgaria

Nils Vaikla serves as an advisor to the executive director at the IMF Executive Board, representing Estonia

Disclaimer: The views expressed are those of the authors and do not necessarily represent the views of the IMF, its Executive Board, or IMF management.

Digitalization has been heralded as “the next engine of growth” for the economies of Central and Eastern Europe (CEE) and the idea that digitalization can transform the region’s economic model has never been more relevant than amid the current coronavirus pandemic.

Buoyed by a new commercially managed investment fund and a $1 billion pledge from the United States, leaders from the Three Seas Initiative will convene for a summit on October 19 to move the project into its next stage.