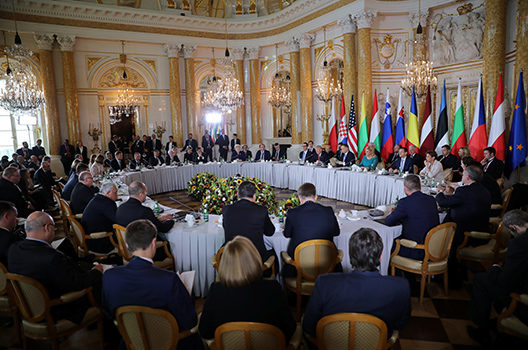 On September 17 and 18, the third annual summit of the Three Seas Initiative, a regional cooperation project between twelve Central and Eastern European (CEE) countries situated between the Baltic, Black and Adriatic Seas, will take place in Bucharest. The meeting comes as the Initiative—which aims to boost Central European trade, energy, and infrastructure cooperation and integrate a new North-South infrastructure corridor into the European economy—faces an array of obstacles from interested foreign powers and internal disagreements. CEE leaders must use the summit as an opportunity to overcome these challenges if the project is to meet its lofty goals, rather than disappearing as a weak attempt amidst the whirl of conflicting global agendas.

The Three Seas states cover 28 percent of the European Union’s territory and 22 percent of its population, but only 10 percent of its gross domestic product (GDP). In recent years, major global powers have begun to recognize the substantial economic potential of the region. China has formed its own ‘16+1’ platform to bolster Chinese-Eastern European ties and increase investment. The United States, on the other hand, believes that the economic ‘catch up’  of the CEE region with its western neighbors is crucial for a strong, globally competitive EU, capable of being a stable US ally amid fast-shifting global dynamics.

The Three Seas Initiative will have to overcome continuous Russian attempts to undermine CEE energy projects, growing Russian-German energy cooperation, and skepticism in the region over whether the project is just as a second-coming of Poland’s Intermarium ambitions. While the Initiative enjoys the support of the United States and financing from EU Structural Funds, China’s increased presence in the region is also alarming Berlin and Brussels. The commitment of some participating countries is also in question, as Austria for instance has sided with Germany on the energy disputes.

One of the most important promises of the Initiative is its energy infrastructure strategy. By constructing terminals to receive liquefied natural gas (LNG) from the United States (and elsewhere, depending on prices) in Croatia and Poland, CEE leaders are aiming to transform the region into the new gas hub for Europe. For all of those concerned about Russia’s energy dominance and possible bullying, the LNG terminals constructed under the Three Seas would be a chance for greater European energy independence. However, the success of the project lies in its market-commercial capacity, as LNG prices are debatably higher than cheap Russian gas, and per unofficial reports, the first binding offers for the terminal capacities have been modest. The summit should focus on ways to make the energy targets commercially viable amidst conflicting interests.

Moscow continues to attack the Initiative, as it could frustrate Russia’s geopolitical interests in the region. Europe accounts for approximately 80 percent of Gazprom exports, while energy itself accounts for almost half of Russia’s exports and 40 percent of its national budget. Consequently, it comes as no surprise that Russia has reportedly tried to undermine the construction of a new LNG terminal on Croatia’s Krk Island by supporting local environmentalists, as well as purchasing land to gain legal grounds for objection.

Germany may also be undermining the Initiative, as Berlin has its own, competing energy ambitions related to the construction of Nord Stream 2 gas pipeline. Without the full support of the EU and its member states, the Initiative does not have bright prospects. On the other hand, the EU has recently committed to finance the building of energy terminals and import LNG from the United States, although the specific details remain to be seen. If the United States successfully manages to drive this project forward, the Three Seas Initiative could provide a strong foundation for this new alternative energy supply, as there is already a five-year deal in place with Poland for US- LNG import.

Many critics view the Three Seas project as a self-interested play by Poland’s ambition to dominate the region, but the Initiative is clearly about regional cooperation, not the integration spelled out in the Intermarium idea. Moreover, the potential economic gains from the project will be spread across the CEE region.

Amidst regressive turns in the region politically, there are important divides amongst the Three Seas states. Poland is extremely anti-Russian, along with Romania, while Hungary has been labelled as the Russian bulwark inside NATO. The upcoming summit will be a test for Hungary, as it will be forced to come out and pick a side amidst the energy disputes. The same applies, although to a lesser extent, to Slovakia and the Czech Republic.

Moscow continues to push the narrative that the Three Seas Initiative is merely a US- and NATO-backed attempt to drive out Russian energy from the European market. This is not the case, as the first infrastructural developments in building a North-South trade route named Via Carpathia are already in place. But if it was, is that a problem? Instead of pouring European money into Russia’s national budget (more than 30 percent), the Initiative can help the CEE region prosper and simultaneously block Putin’s monopoly over Europe’s energy supplies. This outcome certainly seems strategically more sensible in the long run.

The many external and internal obstacles facing the Three Seas Initiative must be confronted at upcoming Bucharest Summit, if the project is to develop into a serious economic program. Hopefully, CEE leaders will be able to overcome these difficulties and provide a path forward for the region’s future.

Zsofia Bajnai is a former intern with the Atlantic Council’s Future Europe Initiative.