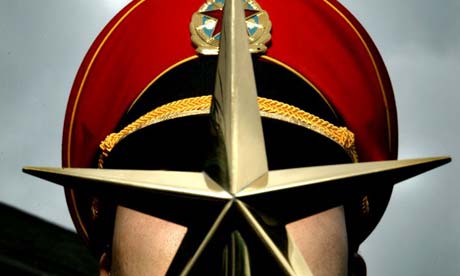 He observed that NATO has formal relationships with four of the five permanent members of the UN Security Council. The US, UK, and France are founding members of the Alliance and the NATO-Russia Council has been in existence for almost a decade. Rasmussen then stated that NATO is seeking a more “structured dialogue with China,” the fifth member. While Rasmussen has been interested in cultivating NATO’s relationship with China for some time, this is the first time an Alliance leader has publicly compared the future relationship with China to the formal NATO-Russia relationship.

Developing NATO’s partnerships around the globe has been one of Rasmussen’s priorities as Secretary General. Last month, he remarked that NATO wants to “reinforce our existing partnerships by strengthening the consultation mechanism within these partnerships and by opening for substance-driven corporation with, partners that go across and beyond existing partnership frameworks.” NATO already has key relationships with “major players across the globe like Japan, Australia, New Zealand South Korea and others.”

NATO has relationships with 22 non-members through its Partnership for Peace program. NATO has also special relationships such as the NATO-Ukraine Commission, the NATO-Georgia Commission, and the NATO-Russia Council. In addition, the alliance meets collectively with non-NATO partners in ISAF, non-NATO troop contributing nations in KFOR, Libya Partners, and countries in the Mediterranean Dialogue.

Wolfgang Ischinger, Chairman of the Munich Security Conference, also believes that NATO and China should work closer together. Ischinger would like the two parties to “sit together to discuss the rules of the game,” and address not just regional issues, but also global security challenges. At Ischinger’s invitation, China’s Foreign Minister, Yang Jiechi, gave the opening address at the Munich Security Conference in February 2010. At that conference, Foreign Ministry spokesman Ma Zhaoxu noted that “China has made some contact with NATO in recent years, and will continue to carry out exchanges with NATO at corresponding levels based on a new security outlook featuring mutual trust, equality and mutual benefit.”

Relatons between NATO and China have improved since US planes bombed the Chinese embassy in Belgrade during NATO’s air campaign against Serbia (Operation Allied Force) in 1999. It took years, but since then contacts have been growing from Brussels to Beijing. In November 2009, Deputy Secretary General Claudio Bisogniero visited China. Bisogniero is the highest ranking NATO official so far to meet with Chinese leaders in Beijing.

More recently, Dirk Brengelmann, NATO’s Assistant Secretary General for Political Affairs and Security policy, visited China, Japan and South Korea in what are seen as annual policy consultations. Brengelmann said, “NATO’s intention is not to become a global police. We intend to remain a Euro-Atlantic organization. But it’s at the same time necessary to do cooperation with these (non-member) partners. There’s an ever-increasing web of partnerships and cooperation.”

Yet, NATO’s closer relationship with China is not all rosy. For example, the Economist has noticed the increase in Chinese diplomatic and economic activity in the region and asked if China is trying to fill a power vacuum in Eastern Europe? “As the countries of eastern Europe bump nervously between a near-neutralist Germany, a revisionist Russia and an absent-minded America, the search is on for a powerful outsider, with strong interests in the region, willing to put all kinds of clout behind the smaller countries’ sovereignty and independence.” Deepening its relationship with NATO would make it easier for China to expand its influence in European capitals without raising alarms. The Economist observes that “Beijing would be glad to have some more allies inside the EU or in its waiting room, in addition to the ones it already has, such as Cyprus. A NATO country would be a bonus.” In addition, China has quietly strengthened its military ties with several European partners such as Austria and Romania. Poland has gone even further and recently signed a new military cooperation deal with China.

China has made dramatic progress in developing a “strategic partnership” with Turkey, a key NATO member. One element of this partnership between China and Turkey includes increasing their trade from $17 billion a year currently, to $50 billion a year by 2015 and to $100 billion by 2020. Turkey is matching these growing economic ties with an active defense relationship with China. Just eight months ago, “China and Turkey secretly held joint aerial exercises at Turkey’s training range in the Central Anatolian town of Konya during the second half of last month, where Anatolian Eagle exercises are taking place between NATO allies and friendly countries.” It was reported that the White House was not happy with Chinese participation in these exercises and convinced Turkey to use older planes in the manevers, instead of its US-made F-16s. This new level of Chinese military involvement with a NATO member was timed to occur a few weeks before Chinese Prime Minister Wen Jiabao visited Ankara to announce the “strategic partnership” with Turkey’s Prime Minister Recep Tayyip Erdogan.

China is also active in what CNN calls, “Beijing’s NATO,” the Shanghai Cooperation Organization (SCO). Last September, 1,000 Chinese troops, including H-6H bombers and J-10 fighter jets participated in “Peace Mission 2010” a joint military exercise hosted by Kazakhstan. Troops from Russia, Kyrgyzstan and Tajikistan also took part. The exercise “marked a major advance in China’s capacity to project its air power and tactical ground-support beyond its own borders and against potential targets in Central Asia.”

Another area of concern if NATO deepens its relationship with China is cyber security. In March 2010, serious warnings “circulated throughout Nato and the European Union for secret intelligence material to be protected from a recent surge in cyberwar attacks originating in China.” According to sources within NATO, “everyone has been made aware that the Chinese have become very active with cyber-attacks and we’re now getting regular warnings from the office for internal security.”

But should such concerns impede NATO from developing closer ties to China? After all, recent scandals about Russian spies in Germany, Bulgaria, Spain, the Czech Republic, Poland and Britain have not prevented the alliance from moving forward with the NATO-Russia Council. Is not China at least more subtle and sophisticated in its penetration of the alliance? “You might very well think that; I couldn’t possibly comment.”

Dr. Jorge Benitez is the Director of NATOSource and a Senior Fellow at the Atlantic Council. Photo credit: Murdo MacLeod/Guardian