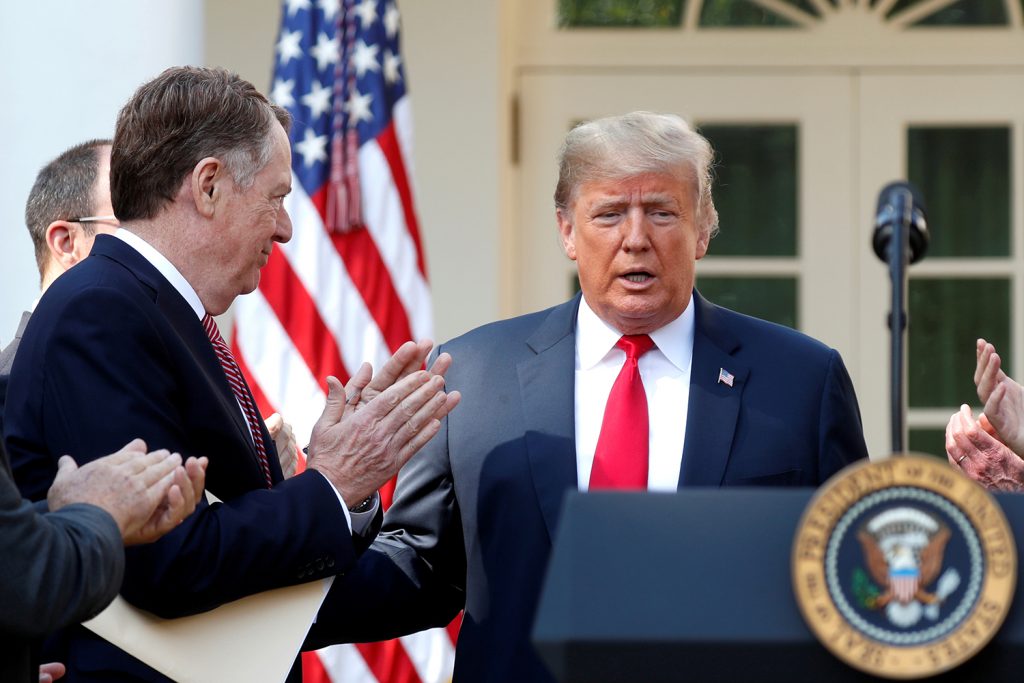 After three years of harsh rhetoric, unilateral tariffs, and export and investment control, US President Donald J. Trump’s muscular trade approach has borne some fruit—in the shape of the US-China phase-one deal (to be signed this week), the US Mexico Canada (USMCA) Trade Agreement (approved by the US House and awaiting passage in the US Senate); and the US Japan trade agreement (USJTA, entered into force on January 1, 2020). While temporarily lowering the temperature of the trade tensions, those agreements have not solved the fundamental problems of the United States’ economic relationships with these countries, in particular China, leaving them for future negotiations amidst continued uncertainty. More importantly but less widely appreciated is the fact that, in different ways and degrees, those bilateral agreements have undermined the global rules-based trading system.

For most of the post-war period until recently, the world has benefited from a multilateral trading system based on agreed rules defining the benefits and commitments of all members, together with a binding dispute settlement mechanism. This has bought transparency, reliability, and comparability of treatment to the world trading system, helping member countries trade with one another, reaping the benefits of comparative advantages. Indeed, such rule-based system— epitomized by the World Trade Organization (WTO)—had served as an engine of growth, with world trade growing on average at twice the speed of the global economy. Those gains, however, have not been distributed equitably, due to the failures of member countries to implement effective trade adjustment assistance measures and needed reforms to cushion the dislocations of many communities and workers. This has contributed to a backlash against the post-war world order, of which the WTO is viewed as a key institution.

Given the discontent with this global trading system, it is important to note that the three deals mentioned above will undermine the basic tenets of the WTO. First and foremost, these agreements strengthen the role of dispute settlement mechanisms (DSMs) embedded in individual Regional Trade Agreements (RTA)s—these have become more definite and political, often eschewing independent arbitrators, compared to earlier generations of RTAs, many of which retained a degree of flexibility in choosing either the RTA or WTO systems to settle disputes. As RTAs continue to profligate—with more than 280 in existence covering half of world trade, according to a recent UNCTAD report—their DSMs will increasingly replace the WTO dispute settlement system in portions of existing trade now under different RTA rules, as well as in new areas of trade and services (especially digital trade). Coupled with the disempowerment of the WTO Appellate Body (having only one member left, thus lacking the necessary quorum for decisions), these developments have significantly marginalized the WTO.

In a more technical perspective, the USJTA appears to violate WTO rules. Article XXIV of the General Agreement on Tariffs and Trade (GATT) specifies that RTAs can be deemed compatible with the WTO if they reduce tariffs on substantially all trade. The USJTA, however, mainly deals with reducing tariffs for US agricultural goods, while excluding the auto trade. The USJTA does not even qualify as a WTO-sanctioned interim deal as it lacks a plan and a schedule for completion as a comprehensive trade agreement.

More substantively, the US-China phase one deal includes China’s commitment to purchase an additional $200 billion of US goods, including $40-50 billion per year of agricultural products, over the next two years. The almost doubling of China’s imports from the United States over a short period of time, if realized, will cause significant trade diversion and distortion in the global trading system. In particular, countries that had benefited from the tariff war by selling more to China in the past two years—for example, Brazil and Argentina in soybeans or Europe in manufactured products—will experience a reversal of those gains, if not more. More importantly, such a governmental commitment to purchase goods flies in the face of the notion of free choices by economic agents in a rules-based system, acting according to market signals to reap the benefits of comparative advantages. Furthermore, if the US administration seeks to use the same approach in dealing with the EU, that would lead to a dead end as the EU is in no position to promise anything like the Chinese commitment.

For its part, the USMCA reiterates the use of quotas, a form of quantitative restrictions generally prohibited by Article XI of GATT. The USMCA basically exempts the export to the United States of cars and car parts from Mexico and Canada up to current levels from any future US tariffs imposed on national security grounds. This follows the template of Trump’s first trade deal, the revised Korea-US trade agreement (KORUS 2…effective since January 1, 2019) which set quotas for the export of steel from Korea to the United States and of cars from the United States to South Korea. Moreover, the quota approach is likely to be employed by Washington again in dealing with Europe and Japan in automobile negotiations.

Last but not least, the USMCA also requires that 40-45 percent of the work producing cars for export from Mexico to the United States must be done by workers earning $16 per hour—three times the current wage of Mexican auto workers. This requirement undermines the comparative advantage of low wages that emerging markets and developing countries have relied on to implement their historically successful manufacturing for export development strategy. Good luck future “Asian” tigers!

Overall, the three early 2020 agreements have started to transform the multilateral rule-based system into a largely bilaterally managed, outcome-based system. RTAs and their new practices accelerate the fragmentation of the world trading system into numerous trading zones with different overlapping memberships and trade coverage, tariffs, quotas, and quantitative trade targets, plus other rules such as local content and country of origin requirements as well as dispute settlement processes. These will increase the complexity and costs of doing business, as well as decrease the efficiency of international commerce. Moreover, by ignoring the benefits of specialization in trade, the new practices will incur opportunity costs in terms of lowering growth potential—this will aggravate the distributive inequality fueling discontent with the WTO to begin with.

In particular, emerging markets and developing countries will suffer the most in the brave new world of managed trade. They will incur substantial administrative burdens (RTAs hardly contain any capacity building assistance provisions) and have their bargaining positions weakened in dealing with the major trading powers outside the transparent and equitable framework of a multilateral system. For those not belonging to any RTAs, they will soon find their cherished “most favored nation” status turning into “least favored nation” status, able to trade only on WTO terms instead of enjoying better conditions with the RTAs.

“Phase One” agreement: Whither the US-China trade war?

The “phase one” deal represents a truce—welcome as it is—in the trade war but nowhere near a solution to the main challenges China poses to the United States and the world trading system more generally.