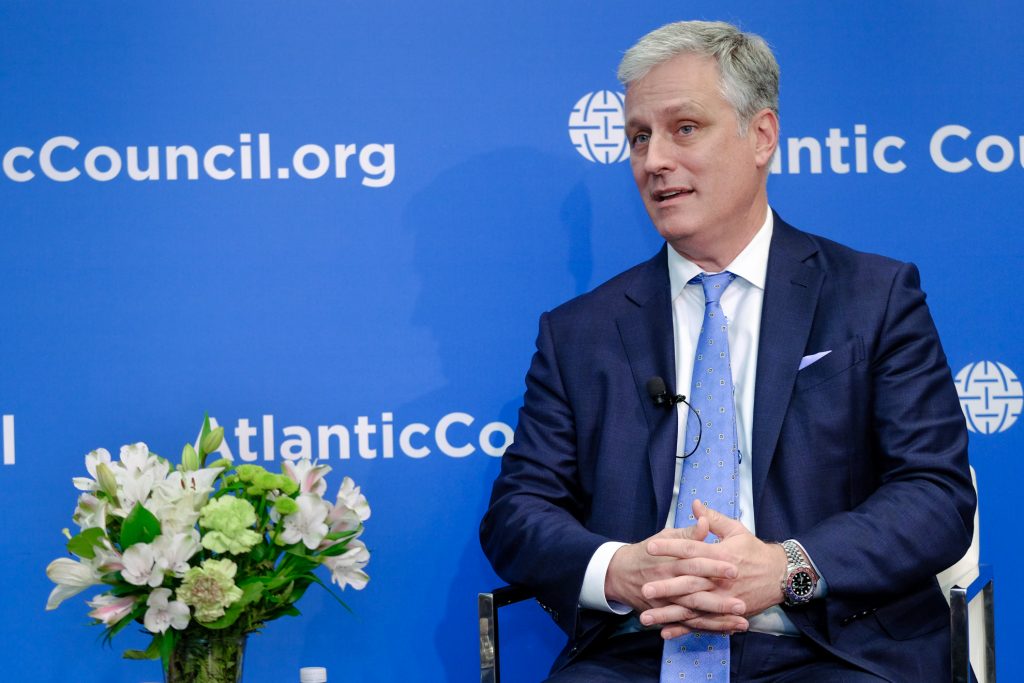 Speaking at the Atlantic Council on February 11, O’Brien argued that this reorganization was consistent with the “Scowcroft model” of the former two-time national security advisor and founder of the Atlantic Council’s Scowcroft Center for Strategy and Security, Brent Scowcroft. This model, O’Brien explained, emphasizes that the national security advisor should not “advocate for one policy or another,” but rather “ensure that the president is well served by the cabinet, departments, and agencies in obtaining counsel and formulating his policies.” O’Brien stressed that while “the vast majority of National Security Council staff are detailed from other departments and agencies, when they come to the White House, they serve as the president’s personal staff and it is our view that while they are at the National Security Council, they should not represent the views of their parent agencies or departments.”

When O’Brien took the reins as national security advisor, he worried that the National Security Council staff had become too large to effectively serve the president and sought to downsize the amount of details from other parts of the US government. “We did not view it as necessary in this administration to recreate a mini State Department, a mini Pentagon, a mini Department of Homeland Security,” at the National Security Council, he explained. The target number of 110 staff members, he added, is closer to the number during the George W. Bush administration.

O’Brien stressed that this reorganization was needed as the United States enters “an era of prolonged peacetime competition with great powers, China and Russia. The president’s 2017 national security strategy makes clear the administration’s priorities and the need for a national security architecture capable of meeting the challenges ahead,” which includes “a streamlined efficient NSC staff…to succeed in this generational undertaking.” O’Brien argued that the move to reorganize is not driven by political motivations or a desire to increase the power of political appointees, but added that he believes “the president has to have confidence in the folks on his National Security Council staff to ensure that they are committed to executing the agenda that he was elected by the American people to deliver.”

Coronavirus and the US-Chinese relationship

As China continues to struggle to contain the coronavirus outbreak, O’Brien said that the United States remains willing and able to assist Chinese authorities. While the United States currently does not have any doctors on the ground in China to assist, O’Brien reported that the United States has “offered the Chinese the opportunity to have American doctors from the [Center for Disease Control] and the [National Institutes of Health] and other experts to come to China and help them.” While “the offer has not been accepted so far” by Beijing, he said, “it is a standing offer.”

Asked by CBS News Senior Foreign Affairs Correspondent and Face the Nation Moderator Margaret Brennen about the potential economic effects of the coronavirus outbreak O’Brien warned that the virus could impact Beijing’s ability to fulfill the terms of the “phase one” trade deal signed in January that paused the tariff war between both countries. As part of the deal’s terms, China is supposed to buy $200 billion of US goods, including $32 billion in agricultural products. O’Brien claimed that the virus outbreak is “not going to change the phase one deal,” but cautioned that “it could have an impact,” especially on the purchase of agricultural goods, and ultimately, the deal “may not have as big of an immediate impact.” He noted, however, that the outbreak of swine flu has made China more dependent on pork imports, which could help keep the numbers on track.

But while the United States remains committed to providing assistance to China to help it battle coronavirus, O’Brien noted that “the coronavirus is not slowing down the Chinese Communist Party from doing exactly what it wants to do” internationally, including campaigning for favorable nominations in the United Nations, pressuring its regional neighbors, and attempting to steal intellectual property and force technology transfer. On February 10, the US Department of Justice charged four members of the Chinese military with orchestrating the theft of data on 145 million US citizens from credit reporting agency Equifax in 2017. US Secretary of State Mike Pompeo further warned US governors on February 8 of Chinese efforts to extend its influence within the United States through lobbying and propaganda. O’Brien said the United States would continue to push back on China, even during the continued coronavirus outbreak. “I don’t think we are taking advantage of the situation,” he said, “but at the same time we are not going to silently stand by.”

Just hours after a Wall Street Journal report detailing the alleged existence of a “backdoor” in 5G technology developed by Chinese telecom Huawei, O’Brien warned US allies not to rely on Chinese products in their domestic 5G systems. With the increased speeds made possible by 5G, he explained, “whoever is between the cloud and your device is going to have access to everything that comes through,” and that means relying on Huawei essentially allows the Chinese government to “take everything that comes down and comes up to the cloud through 5G,” O’Brien argued.

The January decision by the United Kingdom not to totally ban Huawei technology was taken because London thinks “they can mitigate the threat” from the Chinese government, O’Brien explained, but added that the United States does not think this will be possible. O’Brien further warned that other countries will follow suit as “the Chinese are going to come in and offer free or very reduced 5G and that is going to be too tempting of a gift to turn down. But it comes with a price.” He said that the United States is going to have to limit its interactions with those countries who use Chinese 5G technology “to ensure that American secret information is protected.”

Pushed by Brennan on whether all of these points of disagreement with Beijing weaken US President Donald J. Trump’s claim that the United States is enjoying “the best relationship we have ever had with China,” O’Brien said that Washington is now in a position where it is both making progress with its grievances against Beijing and still “standing up to the Chinese.” He argued that now both sides have an “honest relationship,” even if the competition between the two has not let up.

US President Donald J. Trump used his third State of the Union address to argue that his administration has “launched the great American comeback” through its economic policies and tough international stances. In a speech that focused heavily on domestic issues, his discussion of foreign policy mainly highlighted what he believed to be his major foreign policy successes, rather than announcements of new plans.

The race to secure 5G networks: Another Sputnik moment for the United States?

Another Sputnik moment could be upon us, but this time the threat comes from China. What is urgently needed is another “JFK like” moment where the president takes to the nation the fact that we are in a struggle the likes of which we have not seen before.

More about the event

The View from the West Wing: A Conversation with Robert O’Brien, Assistant to the President for National Security Affairs

The Atlantic Council’s Scowcroft Center for Strategy and Security hosts Ambassador Robert O’Brien, Assistant to the President for National Security Affairs for a conversation about both national security and the process for managing the National Security Council in our turbulent times.