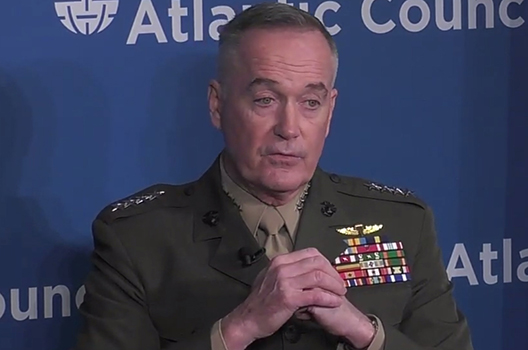 The presence of US troops and military equipment in Europe is important, Chairman of the US Joint Chiefs of Staff Gen. Joseph F. Dunford said on March 21, as Moscow would “be much happier if there was not a physical manifestation of our commitment to NATO because their message that we are not willing to meet our alliance [commitments] would be much easier to sell.”

Dunford told an Atlantic Council audience in Washington at an event sponsored by Saab that the stationing of US troops in Europe, alongside NATO partners, is vital to deterring further military aggression from Russia. “I don’t believe [Russian President Vladimir] Putin has an intent right now of attacking a NATO ally in a conventional sense because I think it is very clear that the cost that would be imposed on Putin would far exceed whatever he could hope to gain,” he said.

On March 8, reports suggested that the US administration was weighing whether to demand that allies such as Germany or Japan pay for US military bases on their own soil or risk Washington withdrawing these troops. US President Donald J. Trump has focused on the amount of money and resources the United States is spending to protect its allies around the world throughout his two years in office.

While Dunford did not address the basing proposal directly, he stressed the importance of keeping US troops stationed in Europe and the Pacific to protect threatened allies. The United States, Dunford explained, has two key competitive advantages: “our network of allies and partners, and the ability to project power where and when necessary to advance our national interest.”

Dunford explained that both Moscow and Beijing understand these advantages and are trying to counter them. Over the past decade, Dunford said, Russia has ramped up investment in “anti-ship cruise missiles, anti-ship ballistic missiles, electronic warfare, anti-space capabilities, [and] maritime capabilities. All of it focused on what they see to be our vulnerabilities in our ability to project power.”

Increasing Russian capabilities, he said, has made it “more difficult for us to project power in Europe than it was ten or fifteen years ago.” Despite this, however, Dunford maintained that Moscow would not be successful in a direct attack against NATO allies because of the presence of forces from the United States and other allies across NATO’s eastern flank. “Russia is deterred from conventional action,” he said.

Dunford added that Beijing has also focused on military investments to “push away our ability to project power in Asia,” including significant new maritime, space, and cyber capabilities. He warned that Chinese efforts to gain equal footing with the United States’ military power are enabled by forays into the Chinese market by US companies. Dunford directly criticized Google when testifying before the Senate Armed Services Committee on March 14, saying that the “work Google is doing in China is indirectly benefiting the Chinese military.”

Dunford stood by his criticism on March 21, explaining that “if a company does business in China, they are automatically going to be required to have a cell of the Communist Party in that company. That is going to lead to that intellectual property from that company finding its way to the Chinese military.”

While he understands the market motivations of doing business in China, Dunford argued that “assisting the Chinese military in advancing technologically is not in US national interest… It is not just about business when you do business in China.”

When asked by event moderator and CNN Pentagon correspondent Barbara Starr if he views Russia as a military “adversary,” Dunford replied that he views Moscow more as a “competitor” and said the United States still has important advantages over both Moscow and Beijing, mainly Washington’s network of alliances. “Economically, politically, and militarily, I have no doubt that with will, we have a comparative advantage over Russia,” he said.

Maintaining those advantages, however, will require getting out ahead of technological changes that Moscow and Beijing have exploited to increase their power, Dunford added. While direct military confrontation has been avoided, Russia has used new technology to undertake “information operations, cyber operations, economic coercion, political influence, [and] unconventional military operations to advance [its] objectives in places like Georgia [and] Ukraine,” he said.

China, meanwhile, is racing toward development and potential domination of 5G mobile networks, which Dunford worried could affect not only “potential vulnerabilities in our systems… but also exchanging information with our allies and partners.” He argued that “any future capability along the lines of 5G has to be trusted,” and that Chinese domination of the technology could put the United States and its allies at a “competitive disadvantage.”

Dunford’s term as chairman of the Joint Chiefs of Staff runs until September 2019, but Trump has already announced his successor will be Army Chief of Staff Gen. Mark Milley.

Image: Chairman of the US Joint Chiefs of Staff, General Joseph F. Dunford, speaks at the Atlantic Council on March 21, 2019.