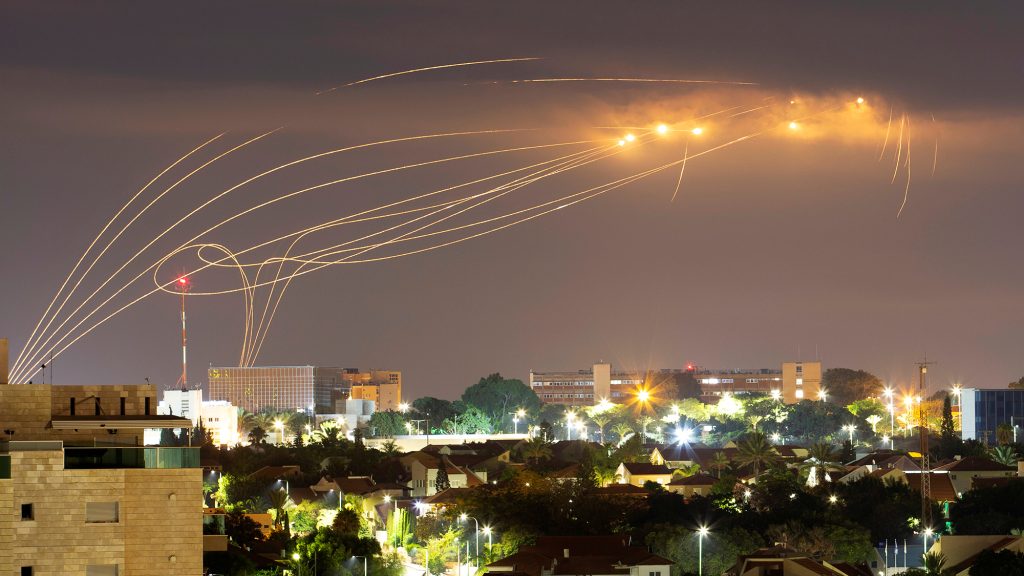 US policymakers can slow down the Middle East arms race while also protecting US interests in the region by marrying missile-defense assistance with missile and bomb reductions.

On a Middle East tour in July, US President Joe Biden set about resetting relations with pivotal leaders in the region. And in the face of rising missile threats from Iran, Biden took the opportunity to articulate the United States’ commitment to working with Middle East partners on an “integrated and regionally-networked” air- and missile-defense architecture, a commitment reiterated in the Biden administration’s long-awaited National Security Strategy.

Integrated Air and Missile Defense (IAMD) is within reach, and because of the cooperation among Middle East partners that it would require, it could potentially address deeper regional disputes. Thus, the United States should back IAMD in the Middle East—but not without reaching an agreement to reduce missile and bomb reserves for participating nations. Otherwise, the United States risks further enabling Saudi bombing campaigns of the kind that made Yemen the world’s largest humanitarian crisis. Now the Biden administration is considering scaling back military support for Saudi Arabia in the wake of the decision by the group of oil-producing nations known as OPEC+ to slow oil production. IAMD tied to cutting offensive stockpiles could be the middle ground Biden is looking for.

The US Congress has indicated that it shares the White House’s political appetite for setting up IAMD in the Middle East. In June, US lawmakers introduced the Deterring Enemy Forces and Enabling National Defenses (DEFEND) Act, which could lead to transnational information and technology sharing architecture needed for IAMD. This call for a security alliance among Israel, Egypt, Jordan, Saudi Arabia, the United Arab Emirates, Bahrain, Qatar, Oman, Kuwait, and Iraq stems from the diplomatic momentum started by the Abraham Accords. In parallel, Congress has increased authorizations for missile-defense initiatives (equipment, upgrades, testing, administration, etc.) from roughly $6.6 billion for fiscal year 2022 to $6.9 billion for 2023. This US-led IAMD diplomacy and missile-defense funding has great stabilizing potential for the Middle East if US policymakers carry them out with careful forethought.

Congressional debates on the above foreign military sales often center on whether recipient countries fully observe international laws and conventions. But there is a solution available to policymakers backing IAMD in the Middle East: Limit foreign military sales to missiles with an exclusive purpose of supporting IAMD and make those sales contingent on countries decreasing their missile and bomb reserves.

Through this arrangement, the US government can limit the ability of a Middle East country to wage war without detracting from US security support for that country. Saudi Arabia’s actions show why US policymakers must strike this balance. Saudi Arabia is the world’s leading importer of arms, and these imports—mainly from the United States, France, and the United Kingdom—enabled it to conduct 150 airstrikes on targets in Yemen that have amounted to 24,000 casualties, including 9,000 civilian casualties by a conservative estimate. Nonetheless, the United States’ economic and security goals in the region rely on the US-Saudi Arabia relationship, highlighting the longtime US foreign policy dissonance between American values and interests in the Middle East. And as countries across the globe look for alternatives to Russian energy in response to Russia’s war in Ukraine, they’ll likely become increasingly dependent on Saudi Arabia, especially with today’s high oil prices and inflation. Saudi Arabia is not naïve about this, given its decision to team up with Russia and other oil producers in OPEC+ to choke oil production to keep prices high. In the end, countries depend on a secure Saudi Arabia but not necessarily Saudi military capabilities.

This distinction is where the strategic and political value lies for the United States in leveraging IAMD assistance to reduce missile and bomb reserves in the Middle East. If the United States provides IAMD in exchange for scaling down offensive stockpiles, it could, by matching Riyadh’s transactional nature, reconfigure the US-Saudi Arabia relationship, in which Washington’s attempts to solidify a long-term strategic relationship have so far gone unreciprocated.

Anchoring IAMD to concessions from Middle East partners to reduce their inventories of missiles and bombs may chip away at their will to participate in this US-coordinated proposal. However, the value of IAMD assistance increasingly outweighs the drawbacks of curtailing offensive stocks as more actors gain access to ballistic, cruise, and hypersonic missiles. Superiority within this context is not a matter of the quantity of missiles and bombs: It is a matter of the quality of defensive technology. Just as guerilla warfare upset the status quo of conventional-military warfare, proxy forces firing missiles by drone press the same advantage in asymmetrical warfare today. Iran-backed Houthi rebels illustrate this as they continue to wage a missile campaign against oil facilities in Saudi Arabia and the United Arab Emirates. The most successful attack took Saudi Arabia’s Khurais and Abqaiq facilities offline, temporarily shutting off output, which amounted to about 6 percent of global daily supply. While US partners in the region may balk at any proposed constraints on their arsenals, they should reconsider as the Iranian missile threat evolves and as the tradeoff for an IAMD becomes increasingly attractive. Not to mention that the United States’ self-critical democracy makes it a more reliable IAMD provider, as its relatively open and transparent internal debate makes it less likely to overpromise technological capabilities in the face of credible missile threats. Moreover, neither China nor Russia has appeared willing or able to act as a regional security guarantor, by default making the United States the most willing and experienced partner for IAMD.

Counteracting forces at play also present opportunities. Political ruptures between countries on the seams of Iranian engagement, Israeli normalization, and Iraqi counterbalancing—coupled with Arab Gulf countries’ wider mistrust of one another—have limited the prospects for any integrated security. Some US partners in the Middle East have expressed the will to amend or evolve their air-defense capabilities for tighter or more capable IAMD, but still cite a need for US coordination. Until these countries can build enough intra-regional goodwill to trust one another, the Middle East will continue to rely on the United States for IAMD. US policymakers can use the necessity of IAMD, therefore, to broker stable relationships and as leverage for missile and bomb concessions within this splintered intra-regional context. In that event, diminishing offensive stockpiles could deter another aggravated response from Iran, a country caught in an ever-escalating security dilemma with its neighbors.

But the United States faces rightful skepticism in the region about its ability to be a reliable partner. The murder of Saudi critic and Washington Post journalist Jamal Khashoggi corroded US-Saudi Arabia diplomacy. During this volatility, Saudi leadership interpreted the US removal of Saudi-based PATRIOT missile batteries in 2021 as a direct repercussion, and the systems were returned in March 2022 after escalating tensions in Europe. International rule of law justly demands that there are consequences for human-rights violations, but this pursuit should not be at the cost of regional stability. Biden breaking the diplomatic ice with Saudi Crown Prince Mohammed bin Salman and other Gulf Cooperation Council leaders in July was a step in the right direction because it opened more space for dialogue. Now the White House plans to “review the bilateral relationship” with Saudi Arabia as a consequence of the OPEC+ decision. It would be a mistake to shun the Saudis again. Communication, not the silent treatment, begets accountability.

The United States is strategically teed up to revisit its relationship with Saudi Arabia and logistically well positioned to back IAMD in the Middle East. Thus, US policymakers can best serve the country’s interests by moving past conventional single-partner security cooperation and taking a more long-term and regional view, one that answers the transactional foreign policy of the Arab Gulf in kind; they can do that by decreasing missile and bomb reserves and increasing regional cohesion through IAMD. Lawmakers can drive the effort by passing the DEFEND Act, but they should first amend it to de-escalate the Middle Eastern arms race. Reducing offensive stockpiles in the region lends itself to lessening negative humanitarian outcomes, or at least can remove US support from any negative humanitarian outcomes. US policymakers must remember to look ahead or risk extending the US legacy of short-sighted assistance that only worsens or enables endemic instability, with evidently little to show from its relationships in the region. 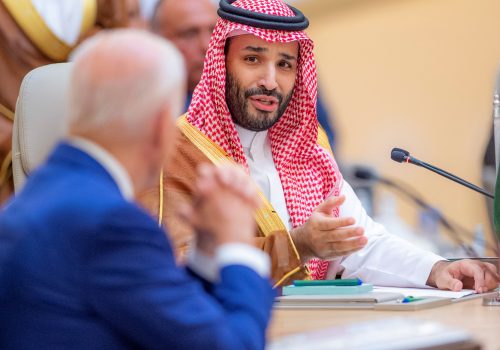 Saudi Crown Prince Mohammed bin Salman's transactional approach carries risks when it comes to US strategic posture in the region. 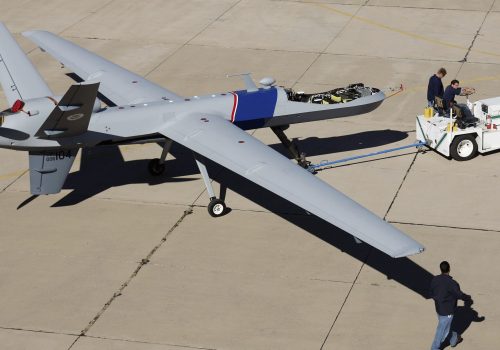 Automating the fight By Daniel Vardiman

Automation won't necessarily lower the military budget—but it will lead to increased readiness and a more effective force. 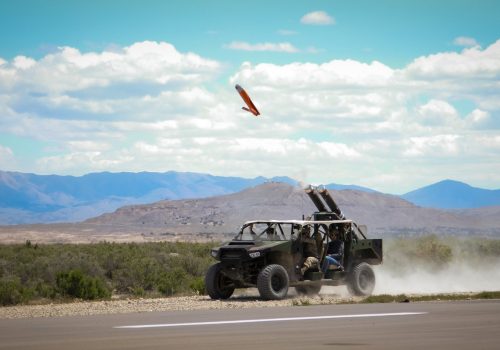 ‘Killer robots’ are coming. Is the US ready for the consequences?

Automating the fight By Tyson Wetzel

The decision to employ killer robots should not be feared—but it must be well thought-out and meticulously debated.

Image: The Iron Dome anti-missile system fires interception missiles as rockets are launched from Gaza towards Israel, as seen from the city of Ashkelon, Israel, on August 21, 2020. Photo via REUTERS/Amir Cohen.