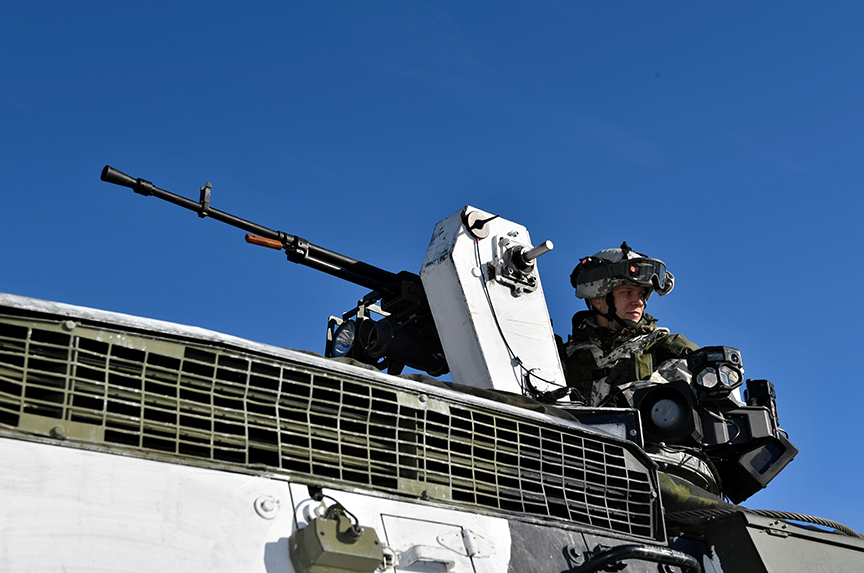 When NATO kicked off Trident Juncture, its largest collective defense exercise in decades in Norway in October 2018, militarily non-aligned Sweden and Finland not only contributed substantial troops, they were actively involved in planning the exercise from the start.

Over the years, Sweden and Finland have moved closer to NATO, more so than any other Alliance partner, in order to meet the challenge of defending the Baltics. In 2014, Ukraine, also a NATO partner, came to the realization that there is a red line between the Alliance’s partners and allies when it comes to collective defense. For Sweden and Finland that red line may be more of a gray zone.

In 2017, then US Defense Secretary James Mattis said in a meeting with his Swedish counterpart that “we will stand by Sweden…It’s not a NATO ally, but it is still, from our point of view, a friend and an ally.” Then UK Defense Secretary Michael Fallon visited Finland shortly thereafter and claimed that as members of the Joint Expeditionary Force, which is part of the NATO Framework Nation Concept, Finland and Sweden could “consider the other seven countries their natural allies.”

Of course, Sweden and Finland are not NATO allies in a formal sense. Neither has signed the North Atlantic Treaty nor do they seek NATO membership. While official inquiries in both countries have examined the option and concluded that joining NATO would increase deterrence, the dominant thinking among the political leadership is that changing the security doctrine would be too dramatic. Remaining militarily non-aligned is viewed by policy makers as a contribution to predictability and stability in the Baltic Sea region.

For Russia, this is good news. Although Sweden and Finland left neutrality behind when they became members of the European Union (EU) in 1995, Russia continues to refer to both of them as “neutrals.” Moscow realizes that Finland and Sweden would stand by their EU and NATO friends in a crisis, but it rarely misses an opportunity to point out that formal NATO membership for Sweden and Finland would raise Russian concerns about balance of power in the Baltic Sea region.

Hesitation toward Alliance membership has not prevented Sweden or Finland from closer cooperation with NATO on territorial defense. This is a remarkable shift given both the history of NATO and the cautiousness of the non-aligned Nordic countries. At the end of the Cold War, Sweden and Finland were neutrals and their militaries hardly interoperable with allied forces. Now they are active EU members and NATO’s closest partners with almost full interoperability.

The main driving force for this shift has been the strategic and operational situation in the Baltic Sea area where the security of one country is indisputably interlinked with that of all the others. No regional country is big enough to counter an adversary by itself, hence outside support is needed.

In short, NATO, Finland, and Sweden have a mutual interest to cooperate on the defense of the Baltics regardless of Alliance membership. Table-top exercises have illustrated both the vulnerability of the region and how the prospects of successfully handling a crisis or war situation substantially improve through collaboration. There clearly are incentives for Sweden, Finland, and NATO to align in case of a threat and meet it in concert. Such joint action would naturally depend upon decisions taken in Stockholm, Helsinki, and Brussels.

Sweden and Finland’s status as Enhanced Opportunities Partners (EOP) for NATO has let them participate in the working procedures of the Alliance on an equal footing with the member states. Sweden and Finland have also committed to pursue their partnership with NATO with a high degree of political will and energy. Finally, it has helped that Sweden and Finland are identified as sharing the Western community’s norms, values, and practices, hence placing them within its “circle of trust.”

The two countries’ status as informal allies in the Baltic Sea region has strengths as well as weaknesses. On one hand, it can strengthen collective defense by preparing for joint action if necessary. But if the status is not openly recognized, it can blur, and thus undermine, the joint commitment made by allies to each other. For Sweden and Finland, this status most likely means that they would both get, and would be expected to give, support from NATO in the event of a crisis in their vicinity. But this is a fragile position that depends on circumstances. In addition, both countries lack formal access to Alliance decision-making and joint operational planning. Developed consultation mechanisms and increased information exchange on operational planning could serve to address these drawbacks and speed up action in case of a crisis.

“There are no rules, we  invent as we go along,” a NATO diplomat told a Swedish diplomat in 2000, explaining NATO’s culture. The inclusion of NATO partners in collective defense would be yet another step in the pragmatic evolution of the Alliance.

As NATO turns seventy on April 4, it needs to strike the right balance between carrying out its core tasks as efficiently as possible, while not undermining itself as a multilateral institution. A strategic discussion on how to make the most of partners in this regard could be a useful step ahead.

Anna Wieslander is the Atlantic Council’s director for Northern Europe and secretary general of the Swedish Defence Association. Follow her on Twitter @AnnwieAnna.