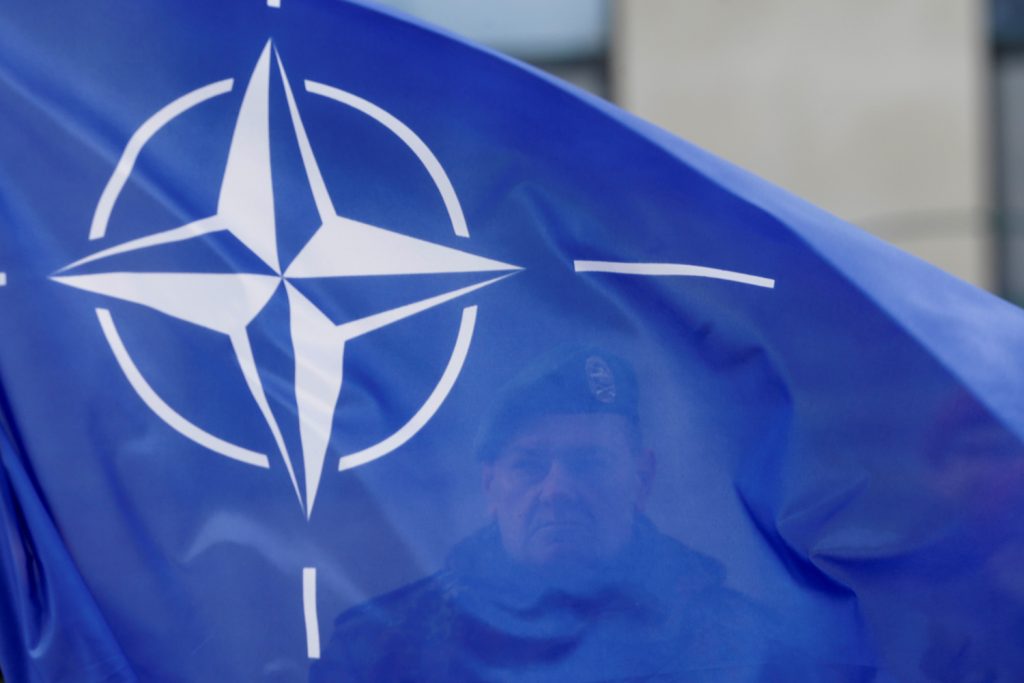 This article was updated on March 18 to reflect Spain’s recent adoption of a feminist foreign policy.

As values-based democracies, NATO allies and partners have been at the forefront of the global women’s rights movement. And as an alliance, NATO plays an important role in advancing equity within foreign policy. When NATO foreign ministers meet later in March, they should take the natural next steps toward adopting a feminist foreign policy (FFP).

FFP is a multifaceted framework that offers an additive lens to more traditional approaches to foreign policy. It aims to amplify the experiences and perspectives of women and marginalized people to dismantle existing systems of patriarchy, colonization, and racism in a way that builds peace, attains gender equality, and protects human rights. FFP’s goals, which are oriented toward changing global systems of power, include eliminating the gender gap, supporting equal representation, and funding diversity initiatives. They also encompass achieving inclusivity for LGBTQ individuals and institutionalizing gender equality and female empowerment. FFP proponents imagine a world where women and minorities are central to decision-making and accounted for in every aspect of policy, rather than an afterthought. In pursuit of this objective, the framework prioritizes expanding opportunities for women and minorities within national governments, among other policy recommendations.

In 2014, Sweden became the first country to officially adopt a feminist foreign policy. Since then, a handful of other countries have begun applying FFP as well. So far, all but one of the six countries that have committed to adopting or officially adopted a feminist foreign policy are affiliated with NATO. Canada, France, Luxembourg, and Spain are treaty allies. Sweden is a close official partner. And while Mexico has no formal ties to the Alliance, there is a good case that it should.

The Alliance has already incorporated gender perspectives into its policy-planning processes, training, and operations; adopted a zero-tolerance approach to sexual exploitation and abuse; and increased the participation of women across the organization. But NATO should formally adopt a feminist foreign policy for two reasons: because morally it is the right thing to do and because FFP will strengthen the Alliance.

From the moral perspective, any organization that seeks “to safeguard the freedom, common heritage and civilisation of their peoples, founded on the principles of democracy, individual liberty and the rule of law” must recognize the experiences of marginalized communities. There is no ethical way to address the complex challenges of the coming decades without incorporating into NATO’s foreign policy the experiences, perspectives, and interests of half of the Alliance’s nearly one billion citizens. And as the world’s most enduring political and military alliance and a bastion of the rules-based international order, NATO should serve as a model for the international community and advance FFP principles. The NATO Special Representative for Women, Peace, and Security, Clare Hutchinson, emphasizes that the holistic approach FFP prescribes requires significant political will to implement. Because NATO’s collective-security guarantee is underpinned by the political will of its members, the Alliance has the legitimate authority to advance FFP with its members and partners.

From a security perspective, addressing the wellbeing of women and nonbinary-identifying people is paramount—especially after the pandemic has highlighted that these groups face disproportionate threats that erode NATO’s promise of collective security for its citizens. As a forum for consensus-based decision-making, NATO must include marginalized perspectives. Doing so would fortify NATO’s core political mandate. Its pursuit of FFP goals would underscore the democratic principles enshrined in the Alliance’s founding treaty and provide a common forum for discussing the institutionalization of FFP principles in member states.

Strategically, there is an opportunity for NATO to incorporate FFP into the Alliance’s next Strategic Concept. Operationally, a NATO-advanced FFP would emphasize human security even over economic gain; champion arms-control measures (based on the framework’s human-centric approach to security); prioritize engagement with civil society (often comprised of women excluded from official government positions); strive for resilience in global health security, taking into account reproductive rights; and set actionable targets for gender parity in the Alliance while advocating for similar measures in member states.

Practically, as a first step to adopting FFP, NATO foreign ministers should recognize that traditional conceptions of gender are a source of power imbalance and insecurity in NATO’s own neighborhood. Alliance members should commit to gender equity as both a means of enhancing security and as an end in its own right, while also recognizing gender inequality as a root cause of conflict. This will require building consensus among allies that peace and security are gendered concepts and that feminist approaches to peace and security can support NATO’s success. These commitments echo parallel principles enshrined in United Nations Security Council Resolution 1325 on Women, Peace, and Security (WPS), which NATO committed to implement in 2007. The WPS agenda, like the principles of FFP, seeks to anchor global peace and security in gender equality, the protection of women and girls in violent conflict, and increased representation of women in political decision-making at all levels. But implementation of this agenda has stalled. Perhaps the FFP framework is the vehicle needed to streamline the implementation of WPS and realize their shared goals.

Notably, FFP could also lend the Alliance a strategic advantage in its great power competitions with the authoritarian regimes in China and Russia. Since the worldviews of NATO’s rivals are dominated by male perspectives, these adversaries are more apt to be blind to the realities of the security environment. The addition of FFP principles to existing liberal democratic values can make NATO democracies even more competitive than they already are against authoritarian regimes.

In a dangerous world marked by rising authoritarianism and shrinking freedoms, NATO has an opportunity to double down on its values by adopting FFP. In doing so, the Alliance would confidently demonstrate that democratic ideals are a source of strength rather than an Achilles heel and achieve a more resilient and secure transatlantic community.

Gabriela R. A. Doyle is the program assistant at the Transatlantic Security Initiative in the Atlantic Council’s Scowcroft Center for Strategy and Security.

Madeline Olden is a young global professional at the Atlantic Council and a graduate student at American University.

Leah Scheunemann is the deputy director of the Transatlantic Security Initiative in the Atlantic Council’s Scowcroft Center for Strategy and Security.

Christopher Skaluba is the director of the Transatlantic Security Initiative in the Atlantic Council’s Scowcroft Center for Strategy and Security. He previously served as principal director for European and NATO policy in the Office of the Secretary of Defense.

Lessons from women in leadership: A celebration of International Women’s Day

By Mary Prakas and Will O’Brien

In celebration of International Women’s Day and in continuation of our mission to foster the next generation of global leaders and change agents, the Atlantic Council’s Millennium Leadership Program asked women leaders in politics, finance, energy, non-profit management, and philanthropy to highlight the importance of women in leadership roles and share the lessons they have learned over the course of their careers.

There’s a disconnect between rhetoric and reality when it comes to women’s roles in peacebuilding and development projects because the discussion about women overwhelmingly focuses on them as victims of conflict and political violence without also recognizing them as participants in it. That’s a problem.