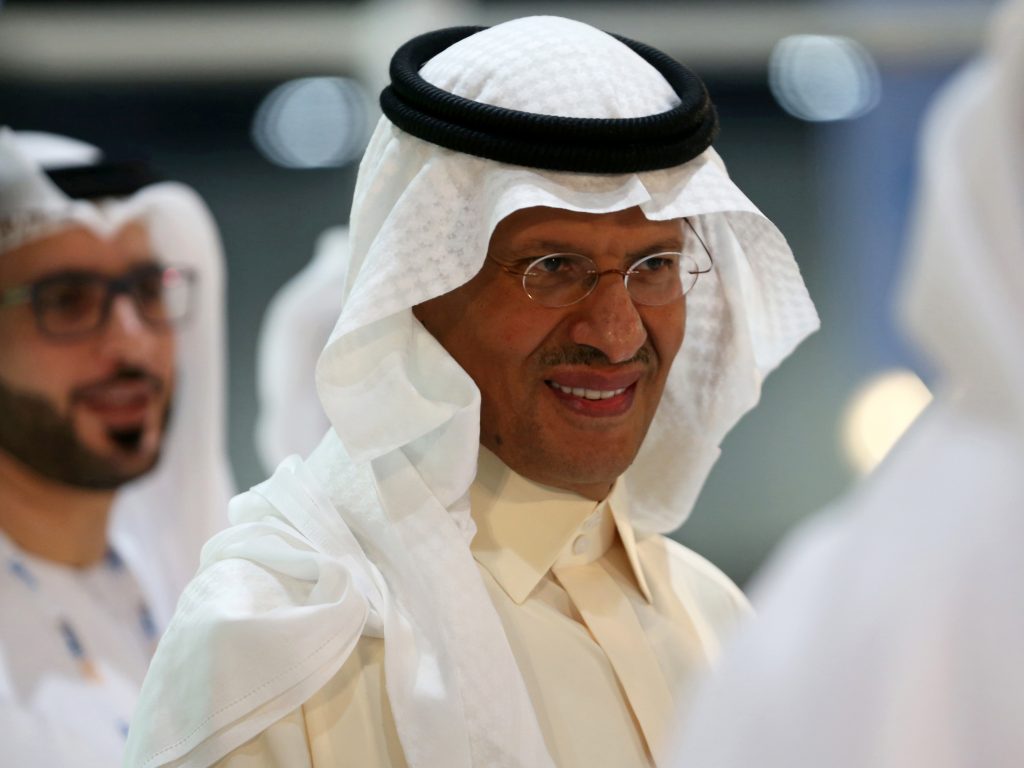 Abdulaziz has been a member of Saudi Arabia’s delegation to the Organization of the Petroleum Exporting Countries (OPEC) for years, but is also the first member of the royal family to serve as energy minister.

Al-Falih’s removal comes just one week after he was replaced as chairman of Saudi Aramco, Saudi Arabia‘s state-owned oil and natural gas company. Yasir Al Rumayyan, the head of the Kingdom’s Public Investment Fund, was selected to replace Al-Falih at Aramco. Al-Falih had also seen his portfolio shrink on August 30, when Saudi authorities decided to make a new ministry for industry and mineral resources, which had previously been under the Ministry of Energy.

The moves to replace Al-Falih could be seen as an attempt to push Saudi Aramco toward an initial public offering (IPO) sometime in the future. In April, the company offered $100 billion of bonds and in August provided public information about its profits, both potential steps to ready for an IPO. MbS has previously pushed for a Saudi Aramco IPO in order to provide funds for his Vision 2030 program, which would attempt to diversify the Saudi economy away from overdependence on oil. Previous plans for an IPO were shelved in August 2018.

Abdulaziz confirmed on September 9 that he would be continuing his predecessor’s policy towards trying to cut global oil production to reverse low oil prices. Abdulaziz promised that the December 2018 agreement between OPEC and partner countries, including Russia, to cut production by 1.2 million barrels will continue “with the will of everybody.”

Atlantic Council experts react to the naming of Prince Abdulaziz as the new Saudi energy minister:

“The abrupt removal of Khalid Al-Falih as Saudi Arabia’s minister of energy, which followed the breakup of his ministry a week prior and then his replacement as chairman of Aramco a few days later, has been described by some as the biggest news in energy in 2019. Al-Falih played a remarkable role in the global oil market since he took over the ministry in 2016 following two years of dramatically low oil prices and led the OPEC+ group to cut production at the end of 2016, which has buoyed prices to more moderate levels over the past few years. Removing such a star was bound to cause a stir among energy market watchers.

“And there were reasons to be worried: will Saudi Arabia remain committed to OPEC+? Will other countries who grew to trust Al-Falih remain committed to the cuts? What does this mean for the Aramco IPO and the Kingdom’s broader diversification strategies?

“In his first speech as the new Saudi energy minister in Abu Dhabi on September 9, Prince Abdulaziz bin Salman, who replaced Al-Falih over the weekend, put some of these fears to rest, rearticulating the Kingdom’s support for OPEC+. We will see later this week at the Joint Ministerial Monitoring Committee meeting how this manifests, but Russia has also already suggested there will be a continuation of policy and the market has reacted positively, with Brent up 1.48% as of publication.

But Abdulaziz’s description of himself in the speech as a “kitchen or basement man”—a technocrat who rolls up his sleeves on the details—suggests a marked contrast to Al-Falih’s almost rock star status in global energy circles. Combined with Crown Prince Mohammed Bin Salman’s unprecedented phone call to Iraq this week to complain about Iraqi overproduction, this move suggests a far more centralized and activist approach to oil policy from the Crown Prince himself. This approach would be almost the reverse negative of US President Donald J. Trump’s efforts to intervene in the oil market via Twitter, which, when he tweeted, would cause prices to temporarily dip. If Trump can intervene in the market, why not MBS?”

“This move represents a further consolidation of power to the Salman branch of the royal family, another step in the still-unfinished transition of power that is intended to conclude with the Crown Prince’s eventual accession. The King has been willing to do away with many traditions that have upended the longstanding Saudi consensus-driven model of decision making, and installing a royal at the top of the energy ministry is yet another sharp break with previous practices.

“And it comes on the heels of two related decrees, the first that split the Energy Ministry to create a Ministry for Industry and Mineral Resources (and the appointment of a private sector businessman to lead it) and the second that installed the managing director of the Kingdom’s sovereign wealth fund, Yasir al-Rumayyan, as the chairman of Aramco. These actions all are being presented as setting the stage for the long-awaited initial public offering of Aramco, the world’s most profitable company. Along those lines Rumayyan has already replaced the finance minister in running the government committee overseeing the flotation, according to news reports, and previously sold the sovereign wealth fund’s stake in a key Saudi petrochemical maker to Aramco.

“All indications are that the Saudis plan to move quickly, likely first listing on their domestic stock exchange, with a hope that this can be done in the window before an anticipated global economic slowdown. It is still possible that this IPO will be combined with a private placement with geopolitical import, perhaps to China.”

“While it is tempting to see this ascension as a surprise, it is likely the culmination of a long-standing plan by King Salman. The division between the royal family and leadership of the oil sector has been carefully sustained. Installing a technocrat who happens to be royal will deflect some criticism of this move, as will pointing to neighboring countries where the practice of placing energy policy under the royal family is commonplace.

“The announcement is likely timed to coincide with the 24th World Energy Conference in Abu Dhabi this week, where Prince Abdulaziz will meet with a slate of global counterparts. This announcement will in fact make him the most sought-after margin meeting at the conference, which bills itself as the “world’s most influential energy event.” Prince Abdulaziz has effectively been training for this job for thirty years, entering the ministry in 1987 and filling successively more senior positions since. His credentials are all in order. What should be examined instead is the increasing centralization of power and decision-making that this represents.

“The US Government will have an unblinking focus on Prince Abdulaziz’s rapport with Alexander Novak, Russia’s energy minister. Novak’s relationship with previous Minister Al-Falih was too close for the White House’s comfort. An agreement between Russia and Saudi Arabia to cut OPEC production, or to jointly pressure non-compliant OPEC nations, could lead to higher oil prices leading up to US elections. A diplomatic full court press may be needed to prevent this.”

“These two decisions are relatively anticipated but still regrettable moves towards centralizing power. While Aramco was always a linchpin of Vision 2030 and it would be wrong to presume that it was ever independent of the state, the Saudi system since the 1970s has ring-fenced Aramco. That’s no longer the case. Whatever the wisdom of the centralized strategy, Aramco and oil policy are now wrapped up in it.

“Abdul-Aziz is experienced and enthusiastic, but putting a royal into the position is breaking down some established walls between the monarchy and the Kingdom’s oil patrimony. That’s fine if you want all policy running through the center—but the institutional independence existed for a reason and was the strength of the Saudi approach relative to its neighbors.

“The fast-tracking of the IPO, and Abdul-Aziz’s new role in OPEC and vis-a-vis Russia, are signals that political objectives are now to be prioritized. That means recognizing the macro-economic time-table vice that is closing in on policy options, and it means we can expect leveraging of the Saudi position with Washington and Moscow (both already uncertain) over the next three to six months in order to front-stack Saudi macro-economic value and polish the country’s image on international capital markets.”

“The removal of Khalid Al-Falih from all his responsibilities and his replacement as chair of Saudi Aramco by [the] head of the opaque Public Investment Fund—the sovereign wealth fund of the Kingdom chaired by the Crown Prince—and the ministry of energy by MbS’ brother may in fact doom the privatization of Saudi Aramco.

“The disagreement between MbS and Al-Falih may have been about the long-term strategy of Saudi Aramco. Al-Falih was strongly advocating for Saudi Aramco to become the largest international oil company-like organization in the world, which implied major investments in natural gas worldwide and in downstream activities such as refining and chemicals. This strategy would make Saudi Aramco be seen by the markets as a well-managed, well-organized company like ExxonMobil or Total, but much bigger with similar valuation and multiple of earnings, valuing the company at the $2 trillion wished for by MbS himself.

“Unfortunately, this strategy also implied that the large funds required for Saudi Aramco’s internationalization would take most of the money away from MbS’ wishes to invest heavily in non-oil related industries, like Tesla or Uber, thereby delaying his effort to turn the country away from its dependence on hydrocarbons.

“The sudden changes in the management of the Kingdom’s only source of wealth may cause potential investors in the IPO to feel that that the excellent management and strategy of Saudi Aramco is now impaired. They may feel that the Kingdom’s priority is now to milk the oil company of all its money to go into other types of unproven, risky, and mostly opaque investments, be it Uber-like firms or the robot city of Neom.”

“The truth is no one knows if there will be any significant implications from the appointment of Prince Abdulaziz as energy minister. We don’t know if his policies will change significantly from Al-Falih’s. We can go under the assumption that Al-Falih’s oil policy was always done in coordination with the monarchy and there is no indication that Abdulaziz, who has worked at or been affiliated with the energy ministry for a long time will deviate significantly from past practices.

“Perhaps the biggest change that we know of is that it may take time for the new leadership at the energy industry to build some of the international relationships, especially with [Energy Minister] Alexander Novak of Russia and [Secretary of Energy] Rick Perry of the United States.

“No matter the criticisms, nobody could have rushed the Aramco IPO before today because the company needed a few years under the new fiscal regime to create presentable books. In any case, Abdulaziz is not likely to be involved in the Aramco IPO because he is not affiliated with the company. Some say that the new minister will be charged with raising oil prices, but in this market there is nothing Saudi Arabia can do to raise oil prices right now.”